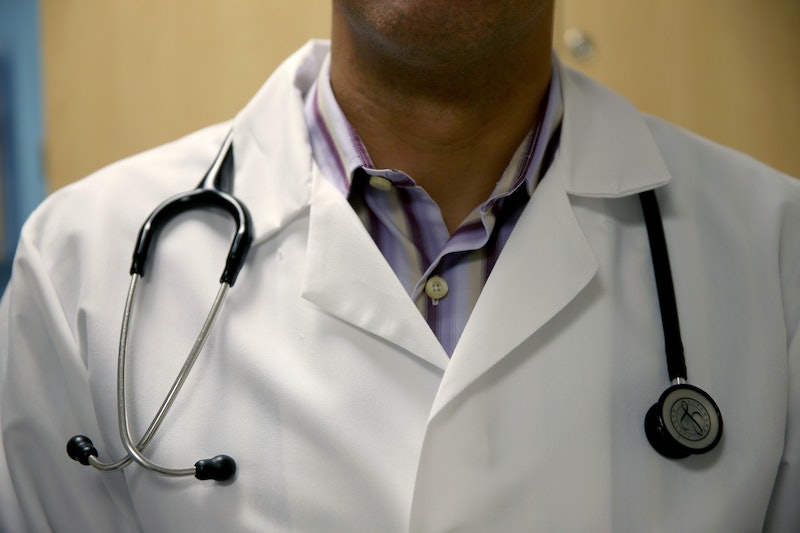 As Ohio lawmakers move forward with a bill that would outlaw abortion as soon as a fetal heartbeat can be detected, Ohio Democrats warn the measure could have a detrimental impact on the entire state's health care system. Ohio state Senator Charleta Tavares tells Bustle Ohio's abortion ban would have a "chilling effect" on doctors in the state, pushing them to practice elsewhere.

"It’s tying the hands of medical professional who want to do what’s best for their patients, and it punishes doctors who perform abortions with prison time," Tavares says. "Who wants to even have that hanging over their head?"

Ohio's GOP senators passed the measure on Wednesday after it sailed through the state House last month. Though a Senate amendment added that abdominal ultrasounds could be used to detect a heartbeat, effectively giving people a few more weeks to decide whether they want an abortion, the proposed legislation still doesn't contain exceptions for rape or incest.

When it comes to doctors, the bill goes a step further by seeking to charge anyone who performs an abortion on a fetus with a detectable heartbeat with a fifth-degree felony — a crime punishable in Ohio by up to one year in prison and a $2,500 fine, The New York Times reported in November.

Ohio was already a hostile state when it came to abortion laws. In 2016, Gov. John Kasich vetoed a similar anti-abortion bill while approving a 20-week ban. And while this bill works its way through the state capitol, another proposal seeking to ban a common second trimester abortion method could also be passed this week.

"There’s this focus on the womb," Tavares says. "As I listened to those speaking [on the floor] yesterday, disproportionately once again they’re older Caucasian men speaking about a woman’s body and what she can and cannot do with it. As I shared yesterday, the message to women of Ohio is they’re still chattel, and men know what’s best."

Tavares and her colleague state Senator Sandra Williams both fear the abortion ban could cause medical students to study elsewhere and drive practicing doctors out of the state if it goes into effect. Ohio, like much of the country, already has a shortage of doctors, but the problem could get worse. After all, a doctor could have more peace of mind practicing in a state that doesn't threaten to throw physicians in jail for performing a medical procedure, Tavares argues.

Because Kasich has already vetoed a similar ban, he's expected to do so again. But what's different this year is Democrats fear Republicans will be able to override a veto. Either way, they expect attacks on abortion rights to keep coming.

"Even if Gov. Kasich vetoes the bill as he did in 2016 and has threatened to do for this one, I believe we will see that bill come back again," Williams says. "This is what happens when you keep electing the same people and they don’t listen to what the voters are asking you to do."

More like this
The 9 Best Exercises For Piriformis Syndrome Relief
By Carolyn Steber
All The Benefits You Get From Sitting In A Sauna
By Carolyn Steber
I Tried The Ice Barrel's Cold Therapy Tool & Now I Like Ice Baths
By Allie Flinn
Got Brain Fog? Here Are The Best Supplements For Memory & Cognition
By Carolyn Steber
Get Even More From Bustle — Sign Up For The Newsletter