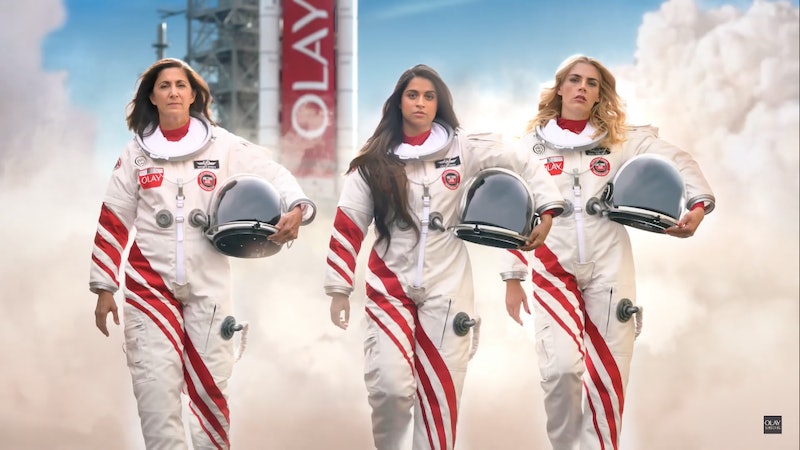 Some people watch the Super Bowl for the game itself, while others tune in for the halftime performance. However, Olay's Women in Space Super Bowl ad is proof that perhaps the best reasons to watch the big game is for the commercials.

For its Super Bowl spot, iconic brand Olay is teaming up with five superstar women — actors Busy Phillips and Taraji P. Henson, comedian Lilly Singh, astronaut Nicole Stott, and journalist Katie Couric — to help make space for women in actual outer space. According to the brand, the ad was inspired by the first all female space walk and will see the female stars taking on different roles to "face anything" as they take to the skies. The ad, called Make Space For Women, will honor women in STEM while also promoting gender equality and inclusivity in the field.

To do so, Olay has launched the matching hashtag to the ad's title — #MakeSpaceForWomen. For every appearance of the hashtag on Twitter, Olay with donate $1 to Girls Who Code with a cap of $500,000. The organization works to increase the number of women in technology closing the gender gap and switching the notion of what a programmer looks like.

While the full ad won't air and reveal why the women are headed to space with Olay until the Super Bowl on Feb. 2, the brand has given fans a sneak peek of the commercial.

Couric opens the spot announcing that Olay is set to take on its first space mission. As she speaks, Phillips, Singh, and Scott all make the walk to the Olay ship with the comedian and actor exchanging words about who has the keys to the ship. Finally, Henson appears announcing that fans will discover the reason they're headed into space come Super Bowl Sunday.

While you'll need to wait until then to discover what Phillips, Singh, Scott, Henson, and Couric's missions are, you can help Olay donate to Girls Who Code with the hashtag #MakeSpaceForWomen in the meantime.