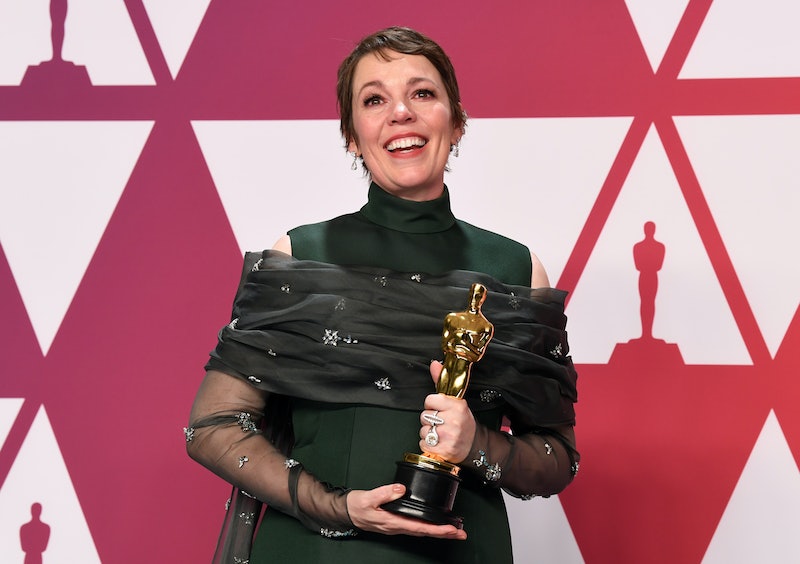 Olivia Colman managed to see off industry predictions last night when she walked away with the Academy Award for Best Actress during the 2019 ceremony. The British actor emerged victorious for her role in The Favourite, in which she portrayed the character of Queen Anne, but she has already enjoyed a long, successful career. So, in light of her Oscars victory, heres a look back at Olivia Colman's career history.

According to the Express, Colman was born in Norwich, Norfolk, and got the acting bug at a young age. Her first role came at the age of 16 during a production of The Prime of Miss Jean Brodie, in which she played the character of Jean Brodie. In an interview with the Big Issue, the actor explained how this early experience ended up being a springboard for the rest of her career. She said: "It never came easy for me. I always felt: there must be something else. Then at 16 I had my first school play — I was Jean Brodie in The Prime of Miss Jean Brodie — and I immediately thought: this is what I want to do; I don’t want to do anything else. And that was lucky because I’m not qualified to do anything else and I’m no good at anything else."

Colman later spent a term studying primary teaching at Homerton College in Cambridge, reports the Mirror, but decided to change career paths and, according to ITV, went on to study drama at the Bristol Old Vic Theatre School, from which she graduated in 1999. Along the way, Colman picked up odd jobs, including as a cleaner (a fact she mentioned during her Oscars acceptance speech).

Colman's early television career included appearances on hit shows such as The Office, and, as reported by the Guardian, she became involved in several projects with actors and comedians David Mitchell and Robert Webb. Colman joined the comedy duo in the Channel 4 sitcom Peep Show back in 2003. However, the Academy Award-winner took the difficult decision to distance herself from the series after her agent suggested she should broaden her acting horizons, reports Beyond the Joke.

In the early 00's, the actor was primarily known for her work in comedy, but Colman took a change of direction when she starred in ITV's crime drama Broadchurch — a role that went on to win Colman a BAFTA for best actress in a drama series. When it came to work on the big screen, Colman stayed true to her comedic roots, appearing in films such Confetti and Hot Fuzz. However, the actor took on a more serious role back in 2011, when she played Carole Thatcher in The Iron Lady alongside Meryl Streep.

As previously mentioned, Colman recently portrayed Queen Anne in black dramedy The Favourite. She starred in the 2018 film alongside Emma Stone and Rachel Weisz, and last night the British actor was awarded the highest honour in Hollywood, winning the Oscar for Best Actress.uring her acceptance speech Colman thanked her family, co-stars, and fellow nominees. Joining the Broadchurch star in the Best Actress category were Lady Gaga, Yalitza Aparicio, Melissa McCarthy, and Glenn Close.