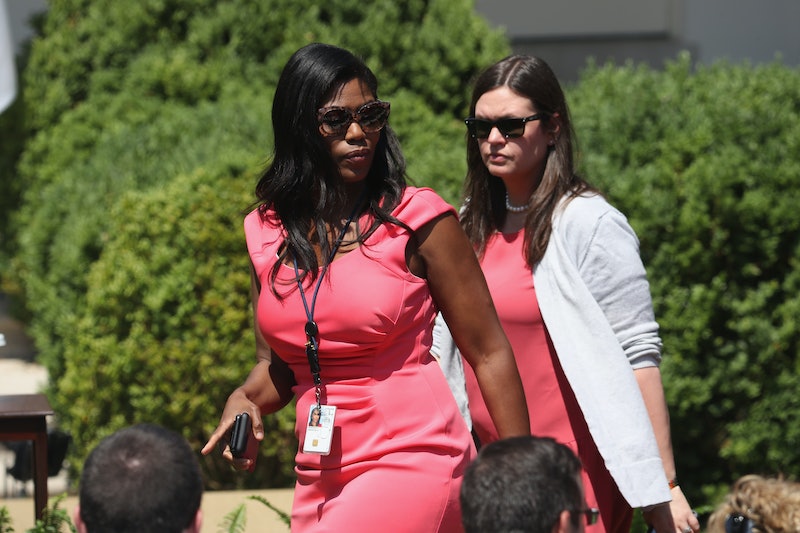 Former White House senior staffer Omarosa Manigault Newman has infuriated the president with the news she's broken during her media blitz promoting her new book. However, his tweets may have missed the element of her story that could actually cause the most danger to the nation: the security threat that Omarosa created by secretly taping conversations in the White House's most private spheres.

In a statement, White House Press Secretary Sarah Huckabee Sanders made it clear that the administration does regard this as a threat, even if the president's Twitter reaction to Omarosa ignored it. “The very idea a staff member would sneak a recording device into the White House Situation Room, shows a blatant disregard for our national security," she said on Sunday. "And then to brag about it on national television further proves the lack of character and integrity."

It raises a bigger question that a White House staff person felt the need to do that, to essentially break with protocol for whatever purpose — to cover herself, or to collect gotcha material.

While this news is clearly raising questions of loyalty to the administration, cybersecurity experts are more concerned with the potential implications Manigault Newman's recordings have on overall security in the White House. The experts are split on how much of a threat the recordings themselves pose, but that someone got away with it definitely raised eyebrows.

Johnathan Katz, director of the Maryland Cybersecurity Center and professor of Computer Science at the University of Maryland Institute for Computer Studies, tells Bustle that it isn't necessary a cybersecurity threat. "I don't really think this is a cybersecurity-specific threat," he says. "People have been secretly recording conversations for decades."

Richard Forno, Assistant Director of the UMBC Center for Cybersecurity and Director of the Cybersecurity Graduate Program at UMBC, however, sees it as evidence of the Trump administration's failure to take security seriously — something that Sanders' take on the situation ignores completely. Forno notes two major issues that Omarosa's recordings bring up regarding security in the White House — the fact that she was able to break the protocols in place surrounding the use of recording devices in secure places, but also the fact that she wanted to do it at all.

"It raises a bigger question that a White House staff person felt the need to do that, to essentially break with protocol for whatever purpose — to cover herself, or to collect gotcha material," Forno tells Bustle. "It reflects the culture in this current White House."

Cybersecurity and wireless technology expert Scott Schober, while agreeing with Katz, also notes an additional danger that the recordings pose.

"[Omarosa's recording] does not pose a specific cybersecurity risk, however it speaks to a greater concern of overall lack of security in the White House and can embolden and set a precedent for any other White House staff member, dignitary, or press to do the same thing," he tells Bustle.

Forno also points out that this isn't the only security issue that this White House has encountered. According to him, the current administration displays "less reliance on established protocols and traditions, and more personal, person-to-person relationships."

"That, to me, presents a huge potential for security weaknesses," Forno says, noting President Trump's disclosure of top secret information to the Russian foreign minister in 2017, which The Washington Post originally reported on, as one example. "This just underscores the level of confusion that still plagues this White House nearly two years on."

Omarosa's recordings and the incident with the Russian minister aren't the only cases of loose security practices coming out of this White House, however. Politico reported in May that Trump avoids having his phone checked by cybersecurity experts because of the "inconvenience," and the case where an outgoing Twitter employee was able to shut down the president's Twitter profile without any oversight raised questions for an administration that uses that for so much of its external communication. To Schober, the Omarosa situation, in addition to being evidence of the "overall lack of security in the White House," is also evidence of the administration's tendency to "[chose] entertainment value over policy."

To Forno, it all adds up to become "a very concerning" situation regarding security at the White House. "Whatever [else] comes out reinforces the perception of how this White House operates," he says.

More like this
Contractors & Other Experts Swear By These Easy Hacks To Save You A Lot Of Money Around The House
By Rachel Bar-Gadda
Are John Legend & Kanye West Still Friends? The Singer’s Latest Update Is Candid
By Brad Witter
Christina Aguilera Took A Powerful Stand At Brighton Pride
By Sam Ramsden
'Scream’s Courteney Cox Has Broken A Major Horror Record
By Sophie McEvoy
Get Even More From Bustle — Sign Up For The Newsletter