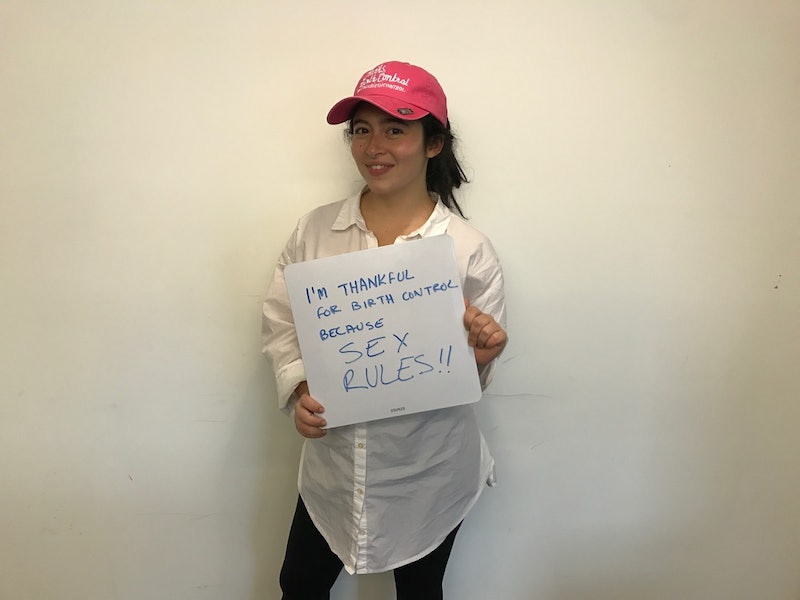 Just a week after the election last year, we celebrated Thanks, Birth Control, a day The National Campaign to Prevent Teen and Unplanned Pregnancy created to honor the role contraception plays in our lives, with uncertainty. What would a Trump presidency may mean for reproductive rights? Would Planned Parenthood be defunded? Should we be sprinting to get IUDs before they're thousands of dollars? Everything seemed unclear and we could only hope that Trump wouldn't actually come after women's rights like we feared.

Now a year after the election, after we've seen what the Trump administration's priorities are, on Thanks, Birth Control Day 2017, it's crucial to not only celebrate birth control today, but to also fight for it. Because despite the fact that 87 percent of U.S. adults agree that everyone deserves the power to access the full range of birth control methods, no matter who they are or where they live, according to a new poll from The National Campaign, birth control coverage and access is being attacked.

With the Trump administration's rollback of the birth control coverage mandate, an Obama-era policy that required employers to include contraception coverage in their health insurance plans, stripping Title X funds, which now makes it difficult for millions of low-income Americans to get high quality health care, and advocating to defund Planned Parenthood, there's no question birth control, an essential part of women's health care, is being threatened.

“Contraception is an essential component of health care," Anne Davis, consulting medical director for Physicians for Reproductive Health, says in a statement shared with Bustle. "It not only allows women to plan and space their pregnancies in a way that is best for their health and their families, but also helps manage a variety of health conditions. Insurance coverage must include birth control so that women can choose the method that meets their needs and have access to it consistently... As a doctor, I am deeply concerned about the impact of these continued attacks on access to care for my patients and for the health of our nation. We have to do better.”

And we have to do better not only because it should be a basic health care right, but also because so many people rely on it. Nearly nine in 10 women of reproductive age will use contraception at some point in their lives. From preventing pregnancy to easing period cramps to treating PCOS, birth control not only helps women live their lives, but saves them too.

Below, women share the reasons they're thankful for birth control.

"I'm thankful for birth control because it gave me control over my body when I was a victim of domestic abuse."

"I'm thankful for birth control because it's the reason I can live with PCOS and manage my symptoms."

"I'm thankful for birth control because it helped clear my acne and gave me confidence."

"I'm thankful for birth control because it puts me in control."

"I'm thankful for birth control because my IUD has given me peace of mind for six years."

"I'm thankful for birth control because I <3 kids... but not right now."

As you think about the role birth control plays in your life, know that whether you use contraception to live a worry-free sex life, to treat acne, for hormone regulation, or to alleviate PMS symptoms, your reason for doing so is valid.

More like this
Are Gemini & Leo Compatible In A Relationship?
By Kristine Fellizar
9 Signs You Might Be In A One-Sided Relationship
By Lea Rose Emery and Mackenzie Sylvester
How To Spot The Signs You’re Being Love Bombed
By Lea Rose Emery and Mackenzie Sylvester
An Honest Review Of The TikTok-Famous WalkingPad
By Kaitlyn Wylde
Get Even More From Bustle — Sign Up For The Newsletter