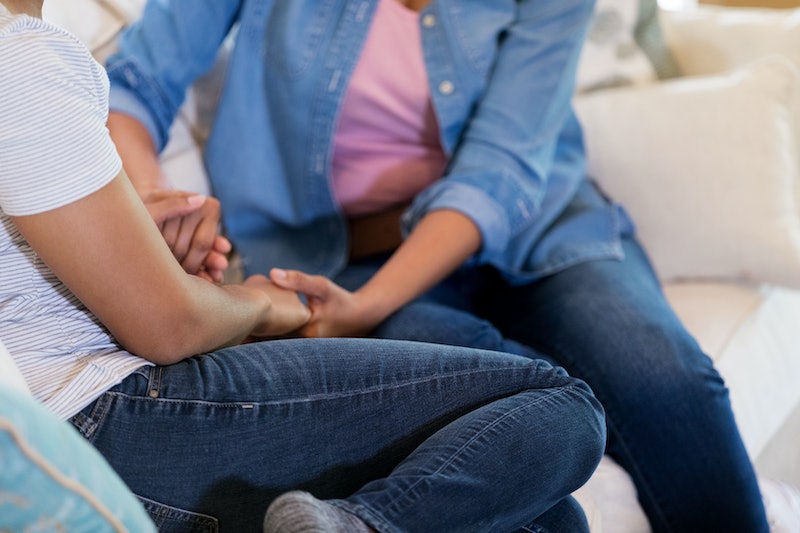 Although a quarter of pregnancies worldwide result in abortion, a huge stigma around the medical procedure still exists. And even though 92 percent of women in the UK are pro-choice, only a third of them would tell their family they were considering having an abortion, a new campaign by Marie Stopes International has revealed.

Conducted by YouGov, the survey of more than 2,000 women is in aid of the charity's #SmashAbortionStigma campaign. As well as finding that the majority of women would hide abortion plans from their families, it also found that only one in three women would tell their friends. Sixty-two percent would speak to a sexual partner about abortion and six percent would speak to no one aside from a medical professional.

This silent culture is perhaps not surprising. Although 79 percent of respondents said abortion should be discussed more openly, abortion's technical criminalisation in England and Wales and the presence of anti-abortion groups can snuff out this desire.

As ITV reports, Ealing Council's historic decision to introduce an exclusion zone around a Marie Stopes abortion clinic has not been widely adopted. A campaign to make so-called buffer zones a legal requirement was rejected by former Home Secretary Sajid Javid who said there weren't enough anti-abortion protests to warrant such a response.

But the fact they exist at all undeniably has an impact. “There is no other healthcare, that has this activity attached to it," Eve Veglio-White, co-founder of pro-choice, anti-harassment organisation Sister Supporter, told ITV. "There’s no other procedure where you would have to be faced with other people's opinions, which is most often rooted in their own religious ideology."

Marie Stopes' campaign is therefore much needed. Not only will talking about abortion dispel any myths, it will also help support those who have one. A woman named Emily told the charity how staying quiet affected her. She had an abortion while at university after emergency contraception failed.

“I knew straight away that I was not in the right circumstances emotionally or financially to continue with a pregnancy, and although I have a good relationship with my family, having an abortion wasn’t something I felt I could speak to them about," she said.

But she only opened up to her mum six months after the procedure, adding: “The first thing she said was, 'I hope you haven’t told anyone.' This reaction affirmed why I didn’t want to tell her, I didn’t feel supported at all and it was very painful experience.”

Already supported by the likes of MP Heidi Allen and author Marian Keyes, the #SmashAbortionStigma campaign wants everyone to get involved. Marie Stopes has designed shareable social media posts and graphics and is asking people to share their pro-choice feelings by posting a short video on social media.

As Dr. Caroline Gazet, Marie Stopes UK's clinical director, states: "The UK is a pro-choice nation, but with a small minority of anti-choice voices threatening abortion rights worldwide, it is more important than ever that we smash abortion stigma and champion the right of women to access abortion care."