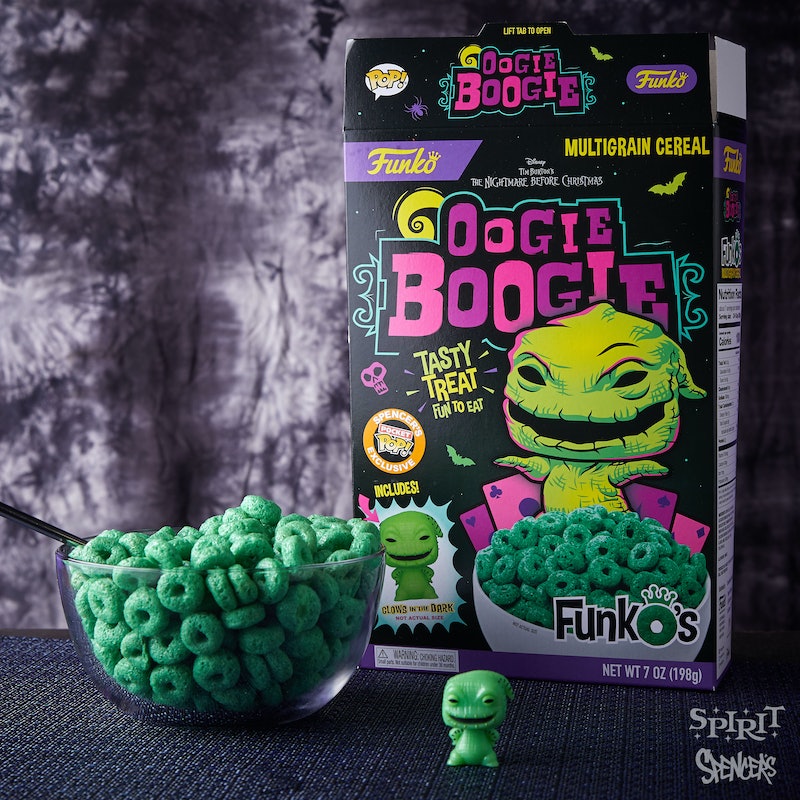 Have we reached peak Nightmare Before Christmas? Maybe, just maybe. There's a lot to love about the cult classic Halloween (and sort of Christmas) film and it's definitely having a bit of a moment. So much so, in fact, that you can now get actual Oogie Boogie Cereal, featuring the villain of the film. They're Oogie Boogie Os and they look delightful. If you love yourself a little Oogie Boogie — aka the kidnapper of Santa Claus — relish in the fact that it is now available as a tasty, multigrain "O", thanks to the folks at Funko. Oh, and yes they are green — obviously.

These little spooky numbers will be available at Spencer’s and Spirit Halloween — in fact, they're already available for preorder for September 11. A seven-ounce box will set you back $10.99, but for that price you also get a little Oogie Boogie toy to call your very own. Each box comes with a toy inside and — if you really want to live it up like the childhood cereal of days of yore — you can even do the maze on the back of the box. Yes, it is designed for children and yes, you will still feel proud when you solve it.

But as I said, there is no shortage of Nightmare Before Christmas at the moment — and Oogie Boogies in particular. Even though this movie normally makes it appearance in, you know, Halloween season, the flurry of excitement has already begun, even while we're still in the middle of summer.

Firstly, you can get a ton of Night Before Christmas merch at Hot Topic (probably its natural, spiritual home) — everything from a laundry bag to an actual Nightmare Before Christmas slow cooker, which is a product so specific and so niche I'm amazed that it exists. I'm happy, to be sure — but definitely amazed as well.

Even Target is getting in on the action, with a Nightmare Before Christmas kitchen line. You can get mugs, bowls, aprons and more to turn your kitchen into Halloween Town. Seriously, they have some really cute bargains on offer.

But perhaps the most exciting news for true Nightmare Before Christmas fans — and Oogie Boogie fans in particular — is that this year's Halloween party at Disney California Adventure is the Oogie Boogie Bash. It's a celebration dedicated to all of your favorite villains, even some who are normally overlooked. And the Oogie Boogie is at the front and center. The celebration runs through September and October, but tickets are already selling fast (some nights are sold out), so you might want to get a move on and head on over to their website.

How soon do you start getting excited for Halloween? For some people, Halloween is just another day of the year — albeit one with a lot of delicious candy. But for others, Halloween is the night of the year. For Halloween die-hards, it's the ultimate holiday and something that you can look forward to year-round.

So although it may just barely be August, it's never too early to start revving up to Halloween. Book yourself some tickets to the Oogie Boogie Bash, get yourself a Nightmare Before Christmas slow cooker (for some reason), and pre-order some Oogie Boogie Cereal. Let the countdown begin.