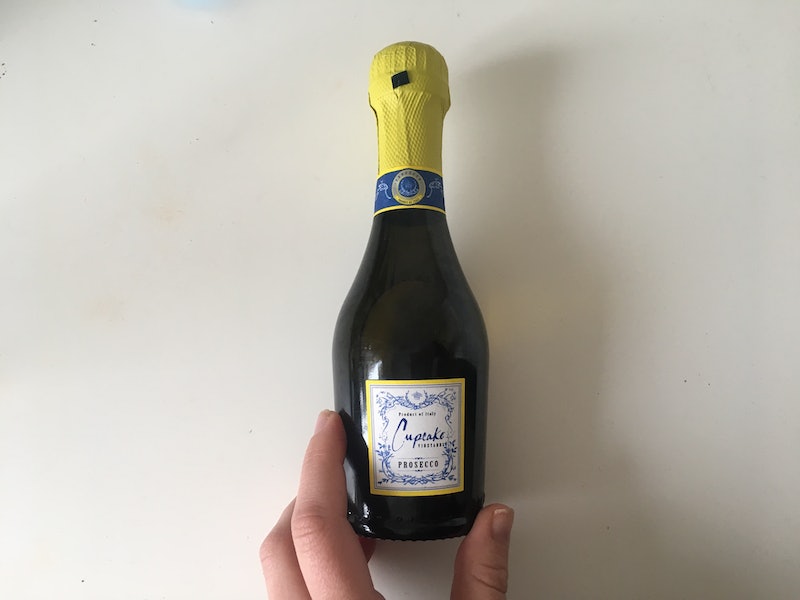 You were never meant to be special. I got you for free at work early last June — everyone in the company did. But I didn’t feel like drinking that day, and you were tiny and adorable, so instead I took you home and put you in my fridge. When my roommate came home, she agreed you were tiny and adorable — the perfect size for one person, if you ever wanted to open a bubbly and didn’t have anyone around to share — and that, dear bottle, is the moment you became special. I saw you there, perched in my fridge, and my twisted little twentysomething brain decided that if I were to open you, it would be some moment of personal triumph. Some moment worthy of drinking an entire mini bottle without having to share.

You lived in the fridge for a few weeks before I decided what that meant, the special moment that would justify the special opening of the special wine. I’ve done this kind of thing before, you see. It’s a symptom of a much larger issue. I have a habit of putting way too much significance on objects, of “saving things for later” — then the big moments come, and I’m so caught up in the fear that comes after that I forget to celebrate. When I landed my dream role in a college production, I didn’t sleep for a solid week, practicing my songs over and over until my voice was raw. (Spoiler alert: everything was fine.) When I landed my dream job, I spent the next few months neck deep in my own paranoia, sure that I would screw everything up. (Incidentally, I'm still here.) I’m really, really good at the part where you duck your head down and work toward things, when you swallow rejection and keep putting up the good fight — but when I do get the things I want, they are always immediately punctuated with a distinct sense of terror: Do I deserve this? Am I really good enough at this? Am I a fraud? How long until everyone else figures it out?

Anyway, I digress, little wine bottle. Back to you.

When I put you in the fridge, I was newly determined not to undermine myself. I would make some achievable goal, or mark some milestone, and then I would drink you. I would savor you. I would not let myself, for however long it took to finish you, feel that unwarranted sense of terror that so many women my age feel.

I forgot about you by the end of the summer. The news kept pouring in, and most of it was terrible. As rare as it is for me to cry at anything, let alone at work, I suddenly found myself quite often in tears in the middle of the day. And then I realized it wasn't just the news — for reasons I couldn't explain, I suddenly felt ridiculous. I felt incompetent. By the time I discovered the massive growth pressing on my thyroid, it was almost a relief — it explained the uncharacteristic tears, the late nights staring up at the wall, a lot of it the natural consequence of a thyroid hormone imbalance I had no idea I had.

I came out of surgery relieved to be able to sing, but not quite comfortable with myself. There was a very visible scar on my throat that would be there forever; my body felt at odds with itself, not quite sure how to react to losing half its thyroid; and, most frustratingly of all, I felt like I had been massively sidetracked from my goals. So when I finally got back to my apartment and saw you staring back at me in the fridge, I decided that enough was enough. I wasn’t going to let you taunt me anymore. I was going to drink you in two weeks, when Hillary Clinton was elected president. It wasn’t a personal achievement, no — but it was an achievement, and it was personal.

Well. We all know what happened after that.

A few days after the election, my roommate innocently asked if I remembered you were in the fridge, and I did something that made me hate myself a little bit: I pulled you out of it. I put you on my dresser and waited until you weren't wet with condensation anymore, and then I shoved you in the bottom of my sock drawer. I was angry at you. You were a talisman of a more hopeful me, a reminder of a time when I thought I could be someone different; when I thought that my idea of good would logically triumph over evil, and couldn't have imagined the year that was 2016.

And then, as soon as you were out of my sight, something finally seemed to snap. The sad fog of the summer and the whiplash of autumn lifted and gave way to anger. That anger would carry me through the end of the year in unexpected ways — it would propel me into writing some of the essays I'm proudest of in my career, many of them speaking out against a president I did not choose. It would push me back into my manuscript, where I let myself briefly escape the ugly news cycle for an hour every day. It pushed me home, where I commiserated with family members as disappointed as I was, and recharged for the fight ahead.

And then January came, along with the inevitable. Farewell speeches. Heavy hearts. Grim news that only seemed to get grimmer as the reality settled in, and the last bleats of "just give Trump a chance" finally found their hill to die on. The news has been more unsettling in the last 11 days than it has been in my entire life, and as I've watched friends break down and seen the consequences of Trump's orders play out in my newsfeed, I thought at first that I would never feel more uncomfortable with the idea of "being an American" in my bones.

But then we caught our breath, and we moved. We took to the streets for the women's march; we took to the streets to protest the immigration orders; we called our representatives and argued for justice (some of us nervously, huddled in the stairwell of our office building like dweebs); we shared our resources; we set up monthly donations to causes that needed our help most; we shouted, and we held up our signs, and we looked up at the helicopters circling over our heads with relief, because we knew that the world was watching — and in a way that seemed slow but actually happened all too fast, the chemistry of millions of brains rewired themselves, pulsing all over the nation: ﻿resist﻿.

I don't know when the time will be right to open you, little wine bottle, but I put you back in the fridge this week. If the past 11 days have taught me anything, it is this — the time will come. And the truth is, when it does, I may forget you all over again. Whatever you're worth celebrating, it's so much larger than I am — much larger than the things I worried about last year, or any year before that. So if I forget about you, this time it isn't because I gave up the fight. It's because I was too busy fighting a bigger one with everyone else to take even a moment to measure my progress alone.

Rest assured, though, little wine bottle — until the day I finally do drink you, I will never take you out of the fridge again.