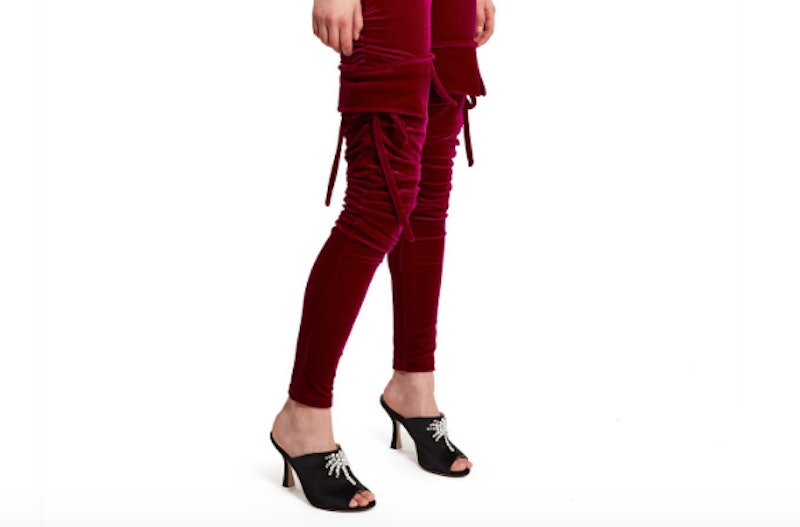 Remember those pants that you had back in middle school that had zippers to make them capris or shorts? Well, they're back with a twist. Opening Ceremony is selling detachable pants that will instantly bring a tinge of nostalgia. This is not a drill. The trend might be back, but it will seriously cost you.

The wave of nostalgic clothing might never end. It all started with the '90s coming back in full swing. You know, chokers, jelly sandals, and overalls. Now it looks like the '00s are here as well — with a modern twist. Y/People's Second Skin Jumpsuit looks like your typical adult-onesie at first glance. When you look closely, you'll notice that the pants are connected to the top by a tie. One slip of a knot and off out go the pants and in come the shorts.

On top of the versatile aspect of the design, the Second Skin Jumpsuit is made of velvet and has a plunging neckline and criss-cross back. It's also on sale. While the Y/People design sold at Opening Ceremony was once $365, it's now on sale for just $146. When you consider that this is two looks in one, it's, well, still expensive. Or is it a small price to pay for nostalgia? You decide.

This jumpsuit comes just in time for springtime. You can head out to the club in a trendy, velvet jumpsuit and then whip off the legs when you start to get too warm on the dance floor. Or head out to the office in the chilly morning with pants on and walk back home without when it gets warmer. Not to mention that it's two looks in one.

It also brings back all those nostalgic fashion moments. The '00s were known for its mini skirts and shirts that expanded when you put them on, but the detachable pants are right there with them. Typically, the shorts to capris to pants piece came with cargo pockets, so this is s fashionable update.

All jokes aside, this jumpsuit is super unique. If versatility is your thing, you could totally rock this. There is a ton of style in the jumpsuit with it's ruched pants and peplum mid-leg cuffs.

You never really know what Opening Ceremony will sell next, but there's a good chance that it will be expensive and quirky. This isn't the first time that the brand came out with a detachable design, either. The brand went viral for creating a pair of jeans that detach into booty shorts. Yes, you read that correctly.

The denim pants had buttons on the top that held the full-pant option in place. But even when the legs were on the design, you could still see a sliver of skin when the two pieces of denim combined. Believe it or not, the pants were even more expensive than the jumpsuit. The all-denim design was a cool $425. The price of the jumpsuit doesn't look so unreasonable now, huh?

Unfortunately, the denim design is no longer for sale on the Opening Ceremony website. So your only option for the nostalgia is the $146 velvet jumpsuit. There's a good chance that, just like the detachable denim, the fuchsia jump won't be available for long, either. You might want to start saving now.

If the sartorial pattern continues, then this is just the beginning of a long line of detachable items on the market. What a time to be alive.