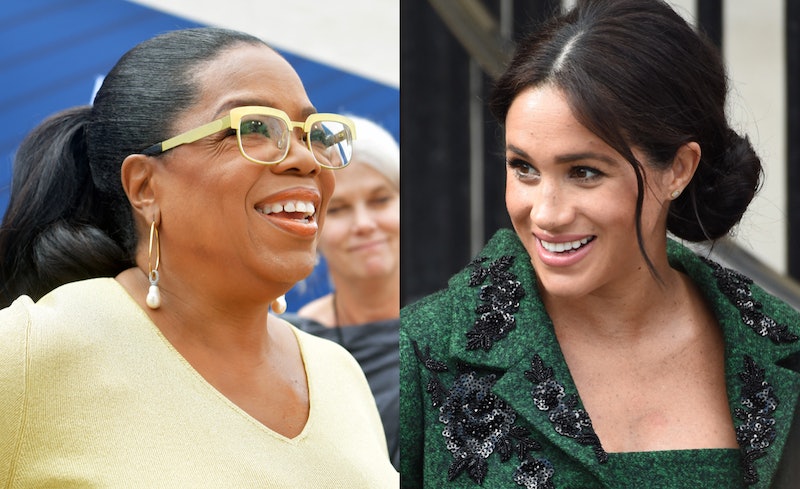 Everyone's fave media sensation, Oprah Winfrey has praised Meghan Markle over her decisions regarding the birth of her baby, due any day now. Winfrey is a friend of the royal couple and attended Meghan and Prince Harry's wedding early last year. She is now supporting the couple's choice to move away from the normal protocol expected when it comes to the birth of a royal baby.

Speaking to ET at The Hollywood Reporter's inaugural Empowerment in Entertainment Gala, the media mogul said, "To be able to stand up and say this is what I really want for my baby and my family and now I'm going to do it a different way when it's been done that way for a thousand years? I'm just so proud of her."

This comes after reports that Meghan and Harry will not make an appearance right after their baby's birth. As the Evening Standard reports, they also have not revealed where the baby will be born or its gender.

Defending Meghan's decision to not appear in public directly after their baby's birth like other royal women have in the past, Oprah said: "Who is ready to walk out and stand before the world and put that face on, you know, a day after you've had a baby?" She continued, "So I think for her and him — I'm sure it was a mutual decision for the two of them — I think it's a great thing." Oprah is right. Let's be honest, who would want to get all dressed up and papped outside a hospital hours after giving birth to your first child? Those are precious moments I'm sure most people would want to spend in private with their loved ones.

According to Town & Country, a statement from Buckingham Palace said, "They look forward to sharing the exciting news with everyone once they have had an opportunity to celebrate privately as a new family."

Oprah has already expressed how unfairly the 37-year-old mother-to-be has been treated by the UK media. During an interview on CBS This Morning, she said: "I think she’s being portrayed unfairly, and I feel that if people really knew her they would know that she is not only everything we perceive of her, in being graceful and dynamic in holding that position, but she just has a wonderful, warm, giving, loving heart."

The Duchess of Sussex has been unfairly and relentlessly criticised for just about anything and everything by the British media, so it comes as no shock that she and her family would want to keep the details on the birth of their baby under wraps.

Meghan is walking to the beat of her own drum, and is ultimately putting what's best for her family and unborn child before the expectations of the royal family. And Oprah put it best, "truthfully, it ain't nobody else's business! That's really the truth." Their baby doesn't belong to the public simply because they are a part of the royal family — it's wonderful to witness the young family taking control and doing what's best for them and their child.