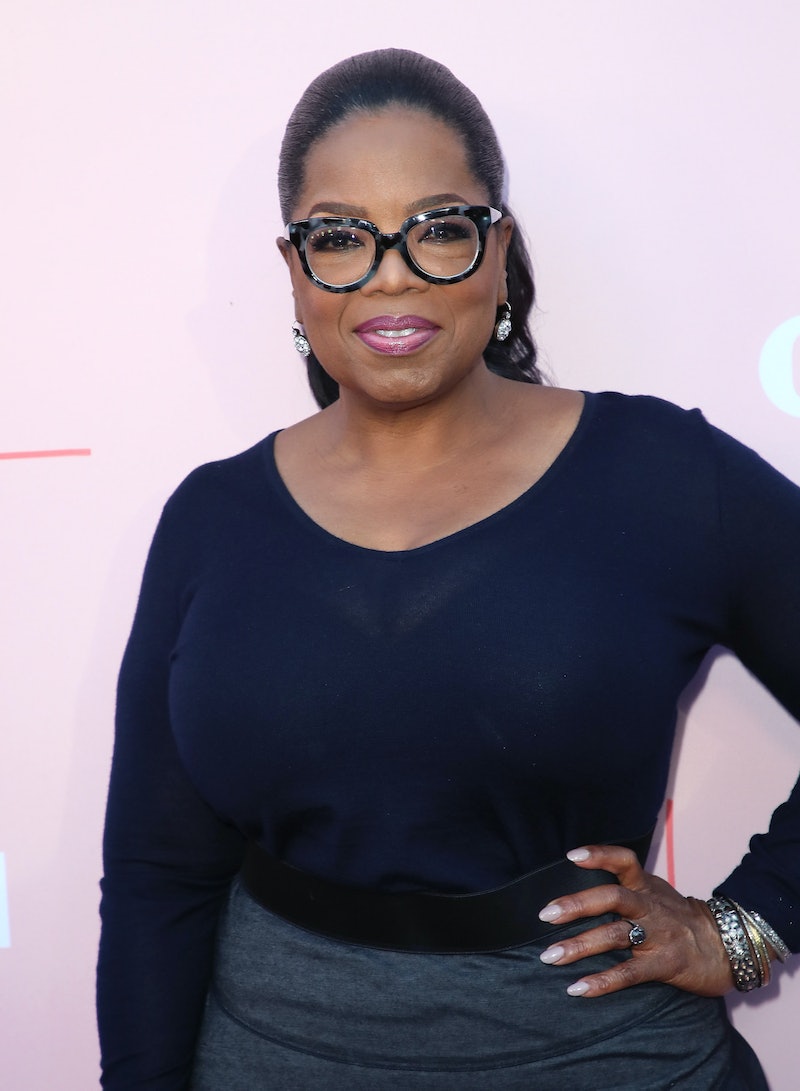 Oprah isn't here for gossip about Meghan Markle. The talk show host appeared on CBS This Morning on Wednesday for an interview with her pal Gayle King, and she had some strong words to share about the Duchess of Sussex's media treatment. Oprah called the press' treatment of Markle "really unfair," adding that many headlines about the duchess don't show who she really is.

"I think she's being portrayed unfairly. And I feel that if people really knew her, they would know that she is not only everything that we perceive her as being — graceful and dynamic and holding that position — but she just has a wonderful, warm, giving, loving heart," Oprah said on CBS This Morning. "I mean, I see all the crazy press around her. I think it's really unfair."

Oprah also said that Markle doesn't read news reports about herself, a fact the duchess confirmed during an International Women's Day panel last month. "She actually does not read anything... I think that's remarkable that in spite of all that's going on, she does not read anything," Oprah explained, referring to the rumors surrounding the duchess. Oprah's comments about Markle start at the 3:16 mark in the below video.

Oprah shouldn't have to defend her friend, but it makes sense why she's taking the time to do so. Between everything Markle's father and half-sister have said about her and the reported "feud" between Markle and Kate Middleton, there are a lot of rumors surrounding the mom-to-be. In fact, the reports have gotten so out of hand that George Clooney even defended Markle amid the press treatment, too.

King also joined in the conversation to share her perspective. "She doesn't seem to buy into it," King said of the duchess and the reports about her. "She's living her life. She's living a very good life. Baby countdown is underway," King added. (The CBS This Morning co-host was one of the guests at Markle's baby shower in New York, as was Amal Clooney.)

During the CBS This Morning interview, Oprah also talked about her new book, The Path Made Clear, as well as the mental health docuseries she's making with Prince Harry. Oprah was a guest at the royal wedding last year, and it's clear that she's close with both members of the couple.

"Our hope is that it will have an impact on reducing the stigma and allowing people to know that they're not alone, and allowing people to speak up about it and being able to identify it for themselves and their friends," Oprah said of the upcoming Apple TV+ series during the same interview. The new show is slated to premiere next year.

Recently, there have been plenty of positive comments about Markle from those close to her, including Oprah, as well as King and Clooney. And fans should trust the people who actually know the royal couple, rather than questionable tabloid sources. Markle's relationships with her family and with Middleton are her own business, and Oprah is right that she shouldn't be subjected to all the ridiculous rumors.

More like this
Lilibet & Prince Charles’ First Meeting Was Emotional, According To Reports
By El Hunt
An 'Emily In Paris' Fave Is Joining Season 5 Of 'The Crown'
By Bustle Editors
Vecna Officially Has A Fan In 'Stranger Things' Star Jamie Campbell Bower
By Alyssa Lapid
Adele Says Postponing Her Las Vegas Residency Was “Brutal”
By Alyssa Lapid
Get Even More From Bustle — Sign Up For The Newsletter