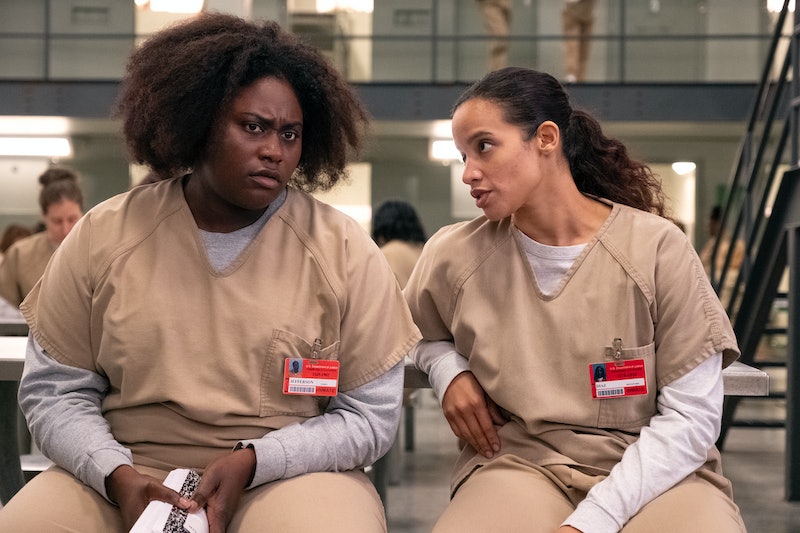 After seven groundbreaking seasons of television, Orange Is The New Black won't be returning for Season 8. The show's seventh and final season hits Netflix on Friday, ending the journeys of the many women of Litchfield and all of the important stories they've shared over the years. But though the series may be over, it's leaving behind an indelible mark on TV.

Orange Is The New Black was only Netflix's third major original series, behind House Of Cards and Hemlock Grove, and according to Variety, viewers still list it as their No. 1 favorite Netflix show even after six years and a now massive original content library. Yes, above Stranger Things and beloved licensed shows like The Office and Friends. Per another Variety report, 105 million subscribers have seen at least one episode of the OITNB. And the series isn't just a fan favorite: when it premiered in 2013, it garnered glowing critical reviews, probably because no one had ever seen anything like it before.

Jenji Kohan, OITNB's creator, crafted a world that was unabashedly female, queer, and racially diverse — one that both examined the dangers of privilege and elevated marginalized stories in a way that, at the time, hadn't been done before. It was hard to watch. It was in your face. And it was wholly original. To say that Orange Is The New Black complicated TV in the best possible way is an understatement, and its dozen Emmy nominations in its first year (the show took home four) proved people were hungry for it. Even if you didn't relate to one specific character, you could certainly relate to their feelings: loneliness, betrayal, happiness, love, confusion, dismissal. No matter their past transgressions, Orange Is The New Black always highlighted its inmates' humanity.

One of the best decisions OITNB made when adapting the book it's based on was widening Piper's white, upper middle class perspective to include those of the rest of the ensemble cast. To sell a show about queer, minority female felons may have been a long shot in Hollywood (and probably still is), but as Kohan once told NPR, Piper was their Trojan horse. OITNB may begin as the fish-out-of-water tale of a pretty white woman in prison for a past mistake, but it's really about the way an unjust and underserved prison system affects everyone — namely, black and Latinx people from low income backgrounds. Would Orange Is The New Black have been able to tell as many stories, to talk about police brutality, to highlight the problems inherent to for-profit prisons, without Piper as an in? She's arguably the least interesting character on OITNB, so it's funny that she's the one who likely enabled the show to happen, but also the one who in the end, matters the least.

According to Taylor Schilling, who plays Piper, this dichotomy will continue to play out in Season 7. She told The Hollywood Reporter:

"It feels as though if you are a white person, particularly a white person with money and financial means, that the law doesn't touch you. And conversely, people are punished for being poor, as opposed to being punished for any kind of crime. There are parallels between a black or brown person committing a crime and a white person committing the exact same crime, and the disparity in sentencing is remarkable. It's incredibly important to bring that to light and I'm glad that we’re having a chance to talk about that through the show."

Until Orange Is The New Black, there hadn't been another show that laid out these points as plainly. And while Season 7 feels like the right time to bow out, given the disparity and inequality still very present in the world, the show could have gone on for 20 more seasons. Nonetheless, it's changed TV for the better — and that's something we can hold onto no matter how much we miss the ladies of Litchfield.

More like this
The 'Gossip Girl' Reboot Creator Is “Looking For A New Home” To Air A Potential Season 3
By Brad Witter
'That '90s Show' Is Officially Coming Back For Season 2
By Gretchen Smail and Grace Wehniainen
The Plane Crash In 'Dear Edward' Is Based On A 2010 Tragedy
By Grace Wehniainen
Keyla Monterroso Mejia Is Finally The Star Of The Show
By Gabrielle Bondi
Get Even More From Bustle — Sign Up For The Newsletter
From hair trends to relationship advice, our daily newsletter has everything you need to sound like a person who’s on TikTok, even if you aren’t.