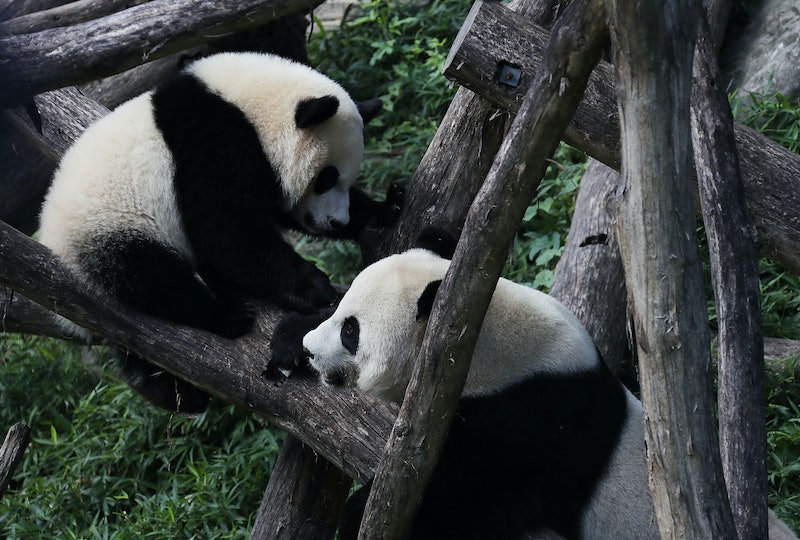 Among humans, there are all sorts of mating rituals — perhaps your partner will surprise you with a romantic date or an out-of-town trip. But, there may be a cheaper option that gets the job done, and it’s an idea inspired by pandas. A new study has found that pandas sing to each other for sex. Yes, you read that correctly. Who knew, right?! You’ve probably heard of male cicadas “singing” to attract female ones, but pandas, too?

On October 31, scientists from China and the United States released their study results, which were published in Royal Society Open Science. Their goal was to see if the various vocal sounds the pandas made during breeding affected their mating. In other words, did the sounds lead to successful sexual encounters?

For the study, they researched 23 adult sexually active giant pandas for two years, during the 2016 and 2018 breeding seasons in Sichuan, China. The pandas were put into open-aired enclosures with an indoor enclosure area, and the enclosures formed a large circle, so the pandas could move between pens to pair up. Then, researchers would observe them serenading one another and getting busy, so to speak. Talk about an interesting day at work!

“Our results revealed that the occurrence of different giant panda vocalizations and acoustic variation within these calls is predictive of successful encounters leading to copulation, as opposed to unsuccessful encounters that do not,” the researchers said in the study. “In addition, key differences were detected between vocalizations produced during and just prior to copulation.” The researchers stated that they wanted to better understand how close-range vocal signaling impacts reproduction. This is particularly fascinating since these pandas are asocial and a conservation-dependent species — i.e., they depend on conservation efforts to prevent becoming extinct.

The researchers found that not only did the pandas sing before sex, but also during sex, and that it was a necessary step in order for them to get together, sexually. The singing also helped them achieve behavioral synchrony, aka physically keeping together in time. So, while humans may prefer being wooed with roses or chocolates, pandas obviously prefer singing and using various vocal intonations. For the study, the pandas’ vocalizations would then be analyzed back in the lab, and many different sounds were discovered.

Usually, the pandas are solitary mammals and live in remote, mountainous regions of Central China, the study said, and avoid other conspecifics — members of the same species — unless it’s breeding season. So, in order for them to locate mates, they communicate — they use their sense of smell, but also vocalizations to court each other, the latter particularly during breeding season.

Among the giant pandas, the most common vocalization is a bleat, which researchers believe means “non-aggressive intent and [to] promote contact between individuals.” And they found that female giant pandas produce high-pitched tonal vocalizations, chirps, almost exclusively during their oestrus period — they are in oestrus for two to four days per year, and this is the time the pandas can become pregnant. The study article states that chirping is not common in males, but both sexes are also known to bark, moan, roar, growl, and squeal when they interact with others. Some sounds can even signal that sex can get violent, so the study suggests that the animals’ caretakers get to know the various vocalizations. Plus, it’s also important for caretakers to be familiar with the different sounds since another study the researchers cited found that some sounds maximize the chances of conception more than others.

What This Means For Science

The study also showed that their research could be useful for breeding programs since not much is currently known about “how mammal vocal signals are used to achieve behavioral synchrony in the lead up to copulation.” For example, these pandas are an endangered species, so monitoring and understanding how they mate could help keep the species going. But, in addition, if more animals are studied in this way, perhaps it would be discovered that other mammals, too, sing for sex, so to speak, and, hence, their species continues.