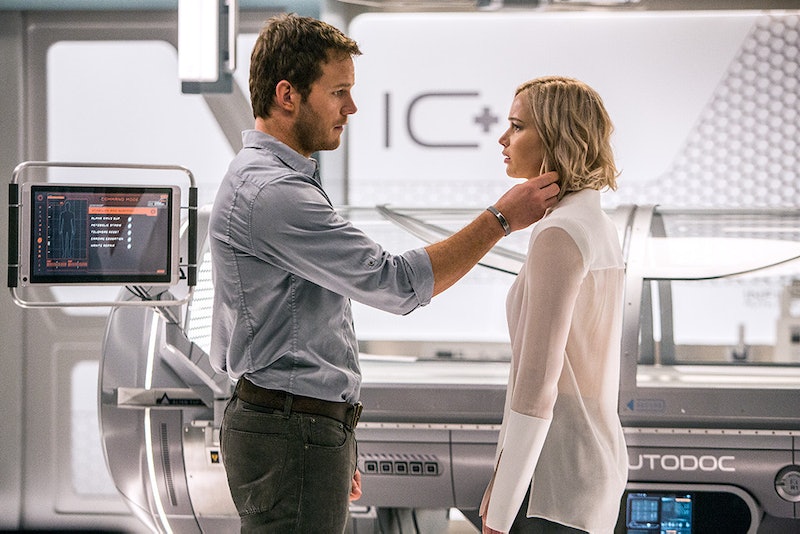 As a woman who loves science-fiction, especially when it comes in the form of an original story not based on an existing property, I really, really wanted to love Passengers. But for as wonderful as the visualizations are, and as interesting as the premise may be, Passengers includes some triggering elements that are hard to ignore. By utilizing a creepy scenario and qualities that could definitely be ascribed to rape culture, Passengers unfortunately loses its way, and made it hard for me to enjoy.

The premise of Passengers revolves around a future intergalactic ship called the Avalon filled to the brim with interstellar travelers making their way from Earth to a new planet. The passengers are set to remain in individual hyper-sleep pods for the 120-year journey, but as the result of an malfunction, passenger Jim Preston (Chris Pratt) wakes up 90 years too early. Not long after, Aurora Lane (Jennifer Lawrence) also wakes up, and the two have to face the 90+ year journey together, while simultaneously dealing with a failing ship. But the reason why Aurora also wakes up is where the unsettling elements of the movie kick in. Spoilers ahead.

Jim spends a little over a year alone on the Avalon, playing basketball, messing around with video games, and talking to his sole companion, a bar robot named Arthur, who, for some reason, is the only person-like robot on the entire ship for 5,000 people. After slowly going crazy for a while, Jim literally stumbles upon Aurora's pod. Here's where the Sleeping Beauty connection of the character's name kicks in: even as she sleeps, Jim is immediately smitten with her. He reads her biography, watches her videos, and sits next to her while he reads her writing. The whole scenario turns a bit stalker-like and obsessive, and it gets way worse when, eventually, Jim decides he's tired of being alone so he's going to wake up the woman who has become the love of his life, despite the fact that they've never met.

By waking Aurora up, Jim is basically killing her. Over the past year, he's discovered that there is no way to put people back into hyper sleep once the ship has left Earth (which in and of itself makes little sense). So bringing Aurora out of her hibernation is sentencing her to live out the rest of her days on the ship, taking her future life away from her and forcing her to live alone with Jim (and Arthur, kind of).

What's worse is that Jim's ultimate plan comes true. Aurora does fall for him, and the two begin a hot and heavy sexual and romantic relationship all while Aurora is ignorant of the truth of how she woke up (she assumes that her pod malfunctioned, too). The scenario is one of captive and captor, and their relationship rings very date-rapey to me. Aurora didn't consent to waking up, and, by being lied to and manipulated (Jim, of course, knows everything about her) she's incapable of making an informed decision about their relationship, which definitely rings of rape culture.

When Aurora finally discovers (from Arthur) that Jim woke her up, she's justifiably enraged. She ignores him, attacks him in his sleep, and calls him a murderer. But eventually the two need to work together to fix the issues plaguing the malfunctioning ship. If any justice were to be had in Passengers, Aurora would use Jim to help solve the problems and then send him floating Battlestar Galactica-style out an air hatch, murdering him in cold blood. But Passengers doesn't allow its lead female any of her own agency, even as a victim; instead, Aurora seems to slowly forgive Jim and ignore what he's done.

The situation the film puts Aurora in is an awful one, and not only because she has to live out her days with the man who felt privileged enough to take her life away. It's because in the end, she chooses not just to remain awake with him, despite what he's done, but to fall back in love with him. The whole scenario just didn't sit right with me. Between the lack of consent, the obsessive manipulation on Jim's part, and Aurora's acceptance of her captor, Passengers contains uncomfortably misogynistic elements that even I, a huge sci-fi fan, couldn't look past.