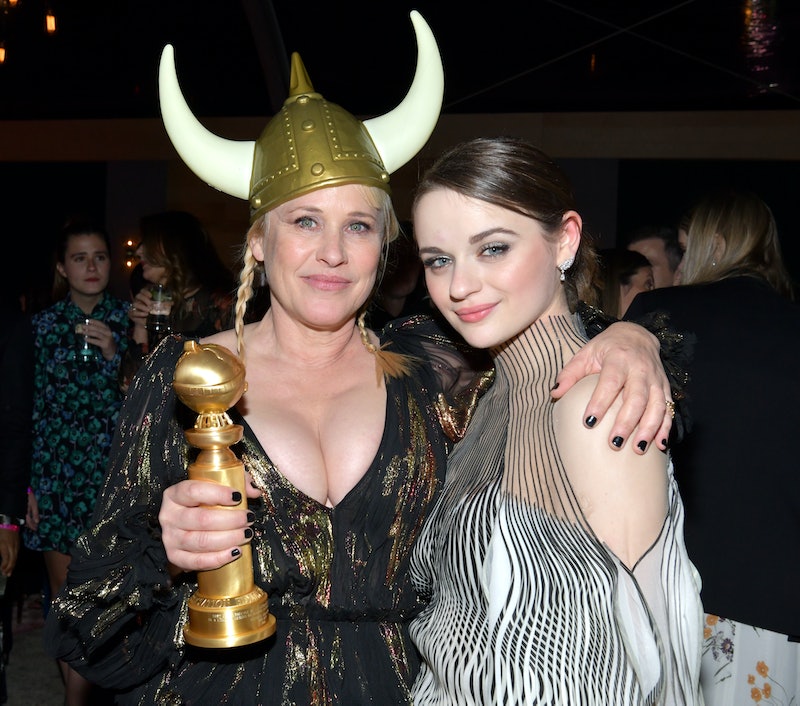 Not all gripping Golden Globe moments are caught on TV. Case in point: Patricia Arquette accidentally hit Joey King’s head with her Golden Globe. On Sunday night, Arquette took home the esteemed statuette for Best Performance by an Actress in a Supporting Role in a Series, Limited Series or Motion Picture Made for Television for her role as Dee Dee Blanchard in Hulu’s The Act. While the actor delivered an eloquent acceptance speech that urged viewers to mobilize in the upcoming election, another moment has captured the attention of fans: her co-star’s head injury via Golden Globe.

On Twitter on Monday, King — who similarly received a nom for lead actress at the ceremony for her role as Gypsy Blanchard in the Hulu series — shared a photo of her forehead injury and wrote, “Patricia Arquette accidentally hit me in the head with her Golden Globe. That sentence will give me bragging rights for the rest of my life.”

More so, Arquette responded to King’s post and tweeted back, “What happens in the elevator stays in the elevator! No seriously I’m so sorry sweetest one!” As it turns out, the injury occurred while the two shared an elevator for InStyle’s annual “Golden Globes Elevator.” The segment features whimsical clips of stars as they ride the elevator down to the magazine’s after-party.

The injury was captured on video, too. In King and Arquette’s elevator segment, King makes it rain with a wad of cash while her co-star dons a Viking hat. In the last few seconds of the clip, Arquette accidentally hits King in her forehead. Arquette tweeted in response to the clip, “I stole the hat and joey got a bump on her head.”

At the ceremony on Sunday, Arquette won for her role as overprotective mother Dee Dee Blanchard in Hulu’s crime series based on a true story. Adapted from a 2016 BuzzFeed article, The Act tells the story of teen Gypsy (King) who murders her mother Dee Dee (Arquette) after she discovers she’s a victim of Munchausen by proxy — the act of caregivers faking illnesses for those under their care.

In her speech, Arquette referenced Donald Trump amid issues with Iran and called on viewers to vote. “For our kids and their kids we have to vote in 2020,” she said. “Beg and plead for everyone we know to vote in 2020.”