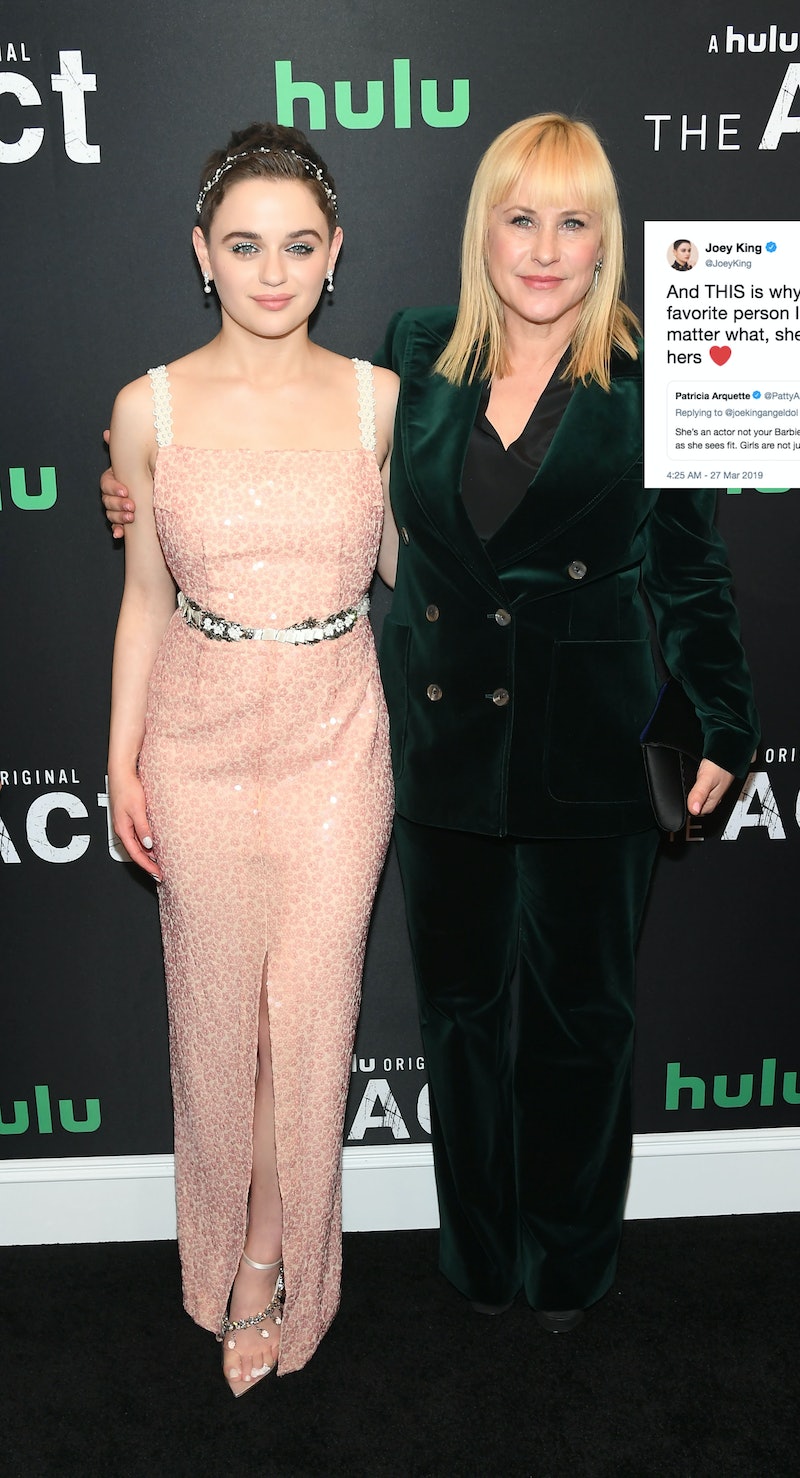 Patricia Arquette isn't here for criticisms of her The Act costar. Arquette stood up for Joey King when a fan criticized the younger actor's appearance in their new Hulu series, making it clear the Oscar winner completely has her on-screen daughter's back. And based on King's reply back, the love is mutual.

In response to a tweet from King on Tuesday, in which she shared a trailer for The Act, a fan account called "Joeykingbarbie" decided to weigh in on the new TV series. "I honestly hate your new movie [sic] it makes u look too too teirrble [sic]," the account tweeted. Arquette was quick to respond to the anonymous account and share why that wasn't the best take. Arquette tweeted,

"She's an actor not your Barbie. She is an artist and should be able to explore her art as she sees fit. Girls are not just objects of beauty."

It's hard to know exactly what the fan meant with the tweet, but Arquette makes a great point. Not every role will feature actors looking conventionally attractive, and that's not a bad thing. And The Act, in particular, is based on an incredibly troubling true story. So King's attractiveness should probably be the last thing on fans' minds in this difficult role.

For fans who haven't watched The Act, Arquette and King play real-life mother and daughter pair, Dee Dee Blanchard and Gypsy Rose Blanchard. As initially reported by BuzzFeed in 2016, Dee Dee suffered from Munchausen syndrome by proxy, which led to Gypsy Rose's abuse, where her mother convinced her and others that Gypsy had illnesses she didn't actually suffer from. Things took an even worse turn when Gypsy eventually pled guilty to second-degree murder in Dee Dee's death in 2015, and she's currently serving a 10-year sentence in prison.

Now, back to King's appearance in the Hulu series: She shaved her head for the role, but that was just the beginning of her preparation to get into Gypsy's mindset. "I would sometimes fall asleep listening to her interviews, like in my ears in my headphones, so that I could get her voice really ingrained in my brain," King told Bustle of preparing for the role. She clearly took portraying Gypsy seriously, as did Arquette with the role of Dee Dee.

"[She] and I were in it together 100 percent," King said in the same Bustle interview, regarding working with Arquette. "Every time we had these heavy scenes, we would just ask each other like, 'Hey, was that OK?' 'What’d you think of that?' or 'What can we do to make it better together?'"

There's no indication that fan account was trying to make light of Gypsy's story, but Arquette's response is a good reminder that just because things are difficult to watch, that's not necessarily a bad thing. And it looks like King agreed with her costar's message, too. She retweeted Arquette's post, adding,

"And THIS is why Patricia Arquette is my favorite person I’ve ever worked with. No matter what, she has my back and I have hers"

Plenty of other fans responded to King's retweet to praise her performance in the new series. "You are amazing in it," one fan tweeted. "This is your best work." Another person tweeted, "I love your look, however you choose. Plus you're an amazing actor, I truly love your work."

The fact that King looks different than her usual self in The Act shows how dedicated she and the series' crew members were to telling the Blanchards' story in an authentic way. It might make viewers uncomfortable, but that's not a bad thing. And Arquette has her costar's back through it all.

More like this
Where Is Armie Hammer’s Ex-Wife Elizabeth Chambers Now After 'House Of Hammer'?
By Grace Wehniainen and Radhika Menon
Jeffrey Dahmer’s Arresting Officer John Balcerzak Got His Job Back After Being Fired
By Grace Wehniainen
How Much Are The 'Schitt’s Creek' Stars Worth?
By Hugh McIntyre
‘SNL’ Finally Spoofed Nicole Kidman’s Weirdly Beloved AMC Ad & Nailed It
By Stephanie Topacio Long
Get Even More From Bustle — Sign Up For The Newsletter