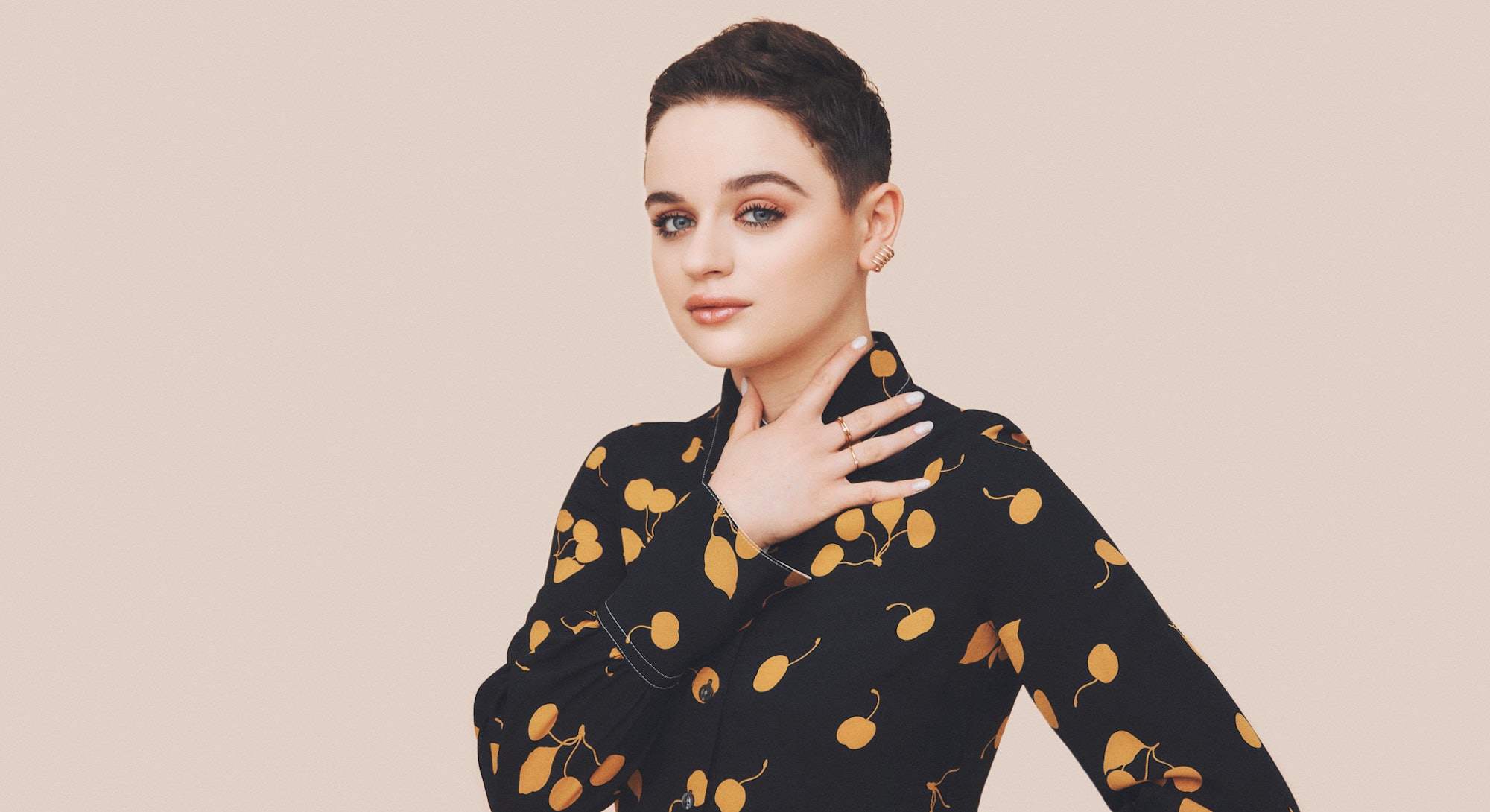 You already know Joey King plays Gypsy Rose Blanchard in Hulu's highly anticipated new series The Act, which tells the devastating true story of an extremely toxic mother-daughter relationship. You've probably seen the Instagram video, too, where King shaved off all her hair to transform into character. And chances are, you've watched the 2017 HBO documentary Mommy Dead and Dearest, which first brought this mind-blowing tale to TV after a 2016 BuzzFeed article by Michelle Dean sparked widespread interest. You're likely also aware of the story's tragic ending: The real-life Gypsy is currently in prison, serving a 10-year sentence after pleading guilty to the second-degree murder of her mother, Dee Dee, after conspiring with a man she fell in love with online. That man, Nicholas Godejohn, was sentenced to life in prison.

You already know all these things, and if you didn’t, you know them now. But beyond the shocking headlines and disturbing details of the case, King’s role as Gypsy Rose Blanchard involved so much more than a five-second video with electric clippers.

Of course, King understands the appeal of the story. "The reality is, people really enjoy tuning in to true crime," she says. "There’s something super intriguing and very stimulating about trying to get inside the mind of a criminal, and Dee Dee and Gypsy are both criminals."

But King is equally conscious of the subject's gravity. The case is nowhere near simple: Gypsy is a victim of Munchausen syndrome by proxy, and her mother Dee Dee (played by Patricia Arquette) perpetuated this form of child abuse, where someone causes or makes up an illness in a person under their care. "What I want to get across is that if you are not a sympathizer with Gypsy, watch this show and you’ll start to rethink calling her a 'cold-blooded killer,'" King says. Spending so much time playing Gypsy meant King found ways to understand her mindset. "She’s a victim. This poor girl went through so much only to sit in prison now. It's no life."

While King does acknowledge Gypsy's responsibility for her actions, including lying about her abilities and helping her mother deceive others, the actor believes it was out of fear. "She became a master manipulator, not by choice, but by survival," she says. In the show, Dee Dee is depicted as reacting violently if Gypsy dared disobey.

I would sometimes fall asleep listening to her interviews... so that I could get her voice really ingrained in my brain.

Beyond the physical transformation of shaving her head and wearing four separate sets of fake teeth, King did as much research as she could about the disorder. But educating herself on Munchausen by proxy wasn't easy. "One in 10 cases is fatal for the victim," King explains, "so a lot of the time, we don’t get to hear from the victims because they die before they even get the chance to escape their circumstances."

Although King says she couldn't meet Gypsy face-to-face, she took mastering the nuances of her personality and physicality seriously, consuming any actual footage of Gypsy she could find online. "I would sometimes fall asleep listening to her interviews, like in my ears in my headphones, so that I could get her voice really ingrained in my brain," the actor says. She also made sure to subtly differentiate between the character's behavior when she's around her mother and around anyone else. When Gypsy isn't with Dee Dee, King explains, "It’s a very slight thing. You can see that she just wants her womanhood to come out, and she wants to be a normal teenage girl with sexual desires and friends and a boyfriend."

While King gave her all getting into character, she took much-needed moments to look after her own well-being, too. For her, that self-care included eating three-month-aged Manchego cheese and marathoning Property Brothers or Tiny House on HGTV. "That’s my best way of unwinding," she admits. Being surrounded by "literally the greatest crew in the world" helped, too, as did FaceTiming her loved ones. "My family is so supportive and so proud of me," she says — and it's clear family means the world to her, as evidenced by the fact that she brought along her mother and grandma on her press day, which included her visit to Bustle's office.

King's fluidity in shifting in and out of seriousness is not only apparent in conversation, it's also something applauded by her co-star Calum Worthy, who plays Godejohn, Gypsy's aforementioned boyfriend. "It felt like there was like two versions of us," Worthy says, referring to the time the pair spent in-character doing scenes and their interactions as soon as the director called cut. "We very quickly found a way for our characters to connect." King's on-screen mom, Arquette, speaks to her commitment as well. "I was actually really grateful that they hired her because I knew she was going to do justice to this [story], and a lot of kids have died from this," Arquette explains. "I knew she was going all in. I mean, the first day, she shaved her head and she never complained." The Oscar winner adds that she saw a lot of her younger self in King and her "spunkiness."

The love between the actors is undeniably mutual, as they've formed a kinship that involves chicken soup (Arquette brought a huge container to set when King had a fever) and post-filming LA hangouts (including brunch and vintage shopping). King describes working with Arquette as a collaborative, nonjudgmental experience. "[She] and I were in it together 100 percent," she says. "Every time we had these heavy scenes, we would just ask each other like, 'Hey, was that OK?' 'What’d you think of that?' or 'What can we do to make it better together?'"

What we do as a generation is we take heavy and dark things, and because it makes us uncomfortable, we start to make light of it.

Given that there's a fine line between fascination and sensationalism when it comes to true crime, the cast's dedication to authenticity is reassuring. After all, it's a TV series made for entertainment value, yet the true story has a devastating ending involving murder and prison time. But King seems very aware of striking that balance. "I never wanted to make it look like I was making a joke of anything," the actor says. "It was super important to us to try and make it as real as possible."

But when you put something out there for public consumption, it's impossible to predict the reaction. King is a self-proclaimed "lover of all memes," but even she doesn't know how exactly the internet will respond to the show. "What we do as a generation is we take heavy and dark things, and because it makes us uncomfortable, we start to make light of it," she says, noting this happens with everything from politics to pop culture. Using the Fyre Festival docs as an example, King recalls, "People really meme'd the sh*t out of that... I laughed so hard at those memes, but I mean, what a horrible situation."

As for The Act's audience? "I don’t expect memes and stuff like that," she hypothesizes, "but I do expect people to try and make light of a situation that makes them uncomfortable, because that’s human nature." Regardless of whether anyone attempts Twitter humor, King makes clear this is about something much bigger: "As long as people are being made aware that Munchausen by proxy exists, then that makes me a little more settled." She wants viewers to remember "this is a real thing that happens to people all the time," and for victims to know, "We’re here for you, you have an out."

In addition to all the hype surrounding this series, King's personal life has been thrust into the spotlight as well, which she admits can be difficult. While the 19-year-old has been acting for more than a decade, fans' fascination with her private life picked up after Netflix's The Kissing Booth became a hit last summer and word spread that she was dating her co-star Jacob Elordi. So many people obsessed over their on- and off-screen relationship, and just as quickly tried to piece together clues they might've broken up last fall.

While she doesn't mention Elordi specifically or their rumored split, King recalls going through a "rough period" while filming The Act. Of course, she's thankful for fans' support, but sometimes she needs to take a step back. "I totally understand why people feel the sense that they got to know me as a character, so they want to know me completely as a human being as well," she says. "But there were times where I was like, 'This is really hard, I wish my privacy was a little more respected now.'"

King's desire for privacy is understandable, but there's one amusing life detail she's open to sharing: "I’m super frugal," she says proudly. "I don’t think I lead an expensive-looking life, but I also don’t think people would expect me to be leafing through my 20-percent-off Bed Bath & Beyond coupons." Things she especially loves about BB&B: the store's never-expiring coupons and its As Seen On TV section, since she's a fan of the infomercials that play at 3 a.m.

From expressing her expertise on shopping big-box stores to dissecting more serious subject matter, King is sure of herself as she speaks. "I’m lucky ... to just be able to be me whenever I want to be," she says, though feeling that way took time. "There’s something to be said about self-confidence, and I never really took it as seriously as I should have," she adds. "Then I found it, and I was like, wow, I’ve been missing this my whole life."

Even with such self-assurance, she's not immune to pre-premiere jitters. "The reaction so far has been really, really surprisingly great. But like, in all honesty, I’m so nervous for it to come out," she confesses. But she's just as excited as she is nervous. "I’ve been seeing billboards [for the show] and I get kind of misty-eyed every time," she says. There's a whole range of emotions there, and considering her preparation for the role — as well as her understanding of the weight of the story behind it — it's easy to see why it means so much.