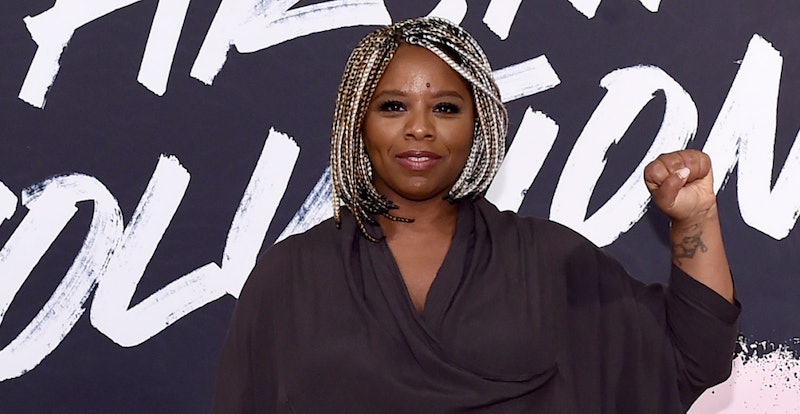 Patrisse Cullors is an organizer, artist, and freedom fighter. In 2013, following the acquittal of George Zimmerman in the death of Trayvon Martin, Patrisse co-founded Black Lives Matter. As the movement to combat anti-Black racism grew, Patrisse's work earned the LA native recognition as a visionary, and the publication of her New York Times best-selling book, When They Call You a Terrorist.

As a journalist who writes about the millennial generation, race, gender, and public policy, I recognize in Patrisse a unique ability to connect individual issues to larger systemic failings. For Bustle's Rule Breakers issue, I spoke with Patrisse about the many rules she believes still need to be broken. Read our conversation, ahead.

Alicia Menendez: You're an advocate for so many issues that are rarely presented as being connected: maternal health, mental health, incarceration, immigration. For you, what's the common thread?

Patrisse Cullors: It’s living in a country that has prioritized money over people — an environment that sacrifices those most vulnerable and marginalized, and really creates conditions where folks have very little to live on, live by, and survive with.

AM: And where does race fit into that theory of our country?

PC: It's the centerpiece. Race was literally created by America — the idea of race, the idea of racialized people, and the idea of who is inferior and who is superior because of their race. So when I think about race and money, what I'm really talking about is racial capitalism. It’s a system that thrives off of having a group of people be inferior, and being able to build whole nations off of that.

We need to really challenge implicit bias inside hospitals.

AM: Recently, Serena Williams shared the story of her own pregnancy complications, which brought Black women's maternal health back into the national conversation. If we want maternal justice in the U.S., what rules need to be broken?

PC: First is the idea of birthing as a medical procedure, and that we consistently need medical intervention. I think there's this idea that birthing is a sickness, versus a miracle and a gift. And so, just a paradigm shift around what we think about how people give birth and what it looks like and what it takes.

I think we need to really challenge implicit bias inside hospitals. What we've seen time and time again is when people of color — Black women in particular — are being cared for by Black people, they don't experience the same type of issues that they would when white people are caring for them. And so really looking at implicit bias and the impact it has on people giving or providing care, or lack thereof.

AM: You've written about mental health and incarceration, and the need to support those in the Black community with mental illness to prevent vulnerability to police brutality. How are you trying to increase awareness in this realm?

PC: At least half of the jailed and prison population have some diagnosis, whether it's depression, or schizophrenia and schizoaffective disorder. And the impact of jailing people who have mental illness just exacerbates the issue. Instead of building up the resources where we could care for people, we are creating environments where folks are going in with severe mental illness and coming out with their mental illness definitely not being treated.

AM: Shifting to another issue, the Trump Administration's policy of separating migrant parents and their children has struck immigration back into the national conversation. But it's bigger than what's happening at our border: It's about proposed changes to legal immigration, including what qualifies for asylum, temporary protected status renewals, and the continued fight over DACA. How does race factor into these policies?

AM: Often when we talk immigration, it's framed as a purely Latinx issue. How do you bring the Black community into the fold?

PC: I mean Black folks, especially Black immigrants, are on it, and talking about how they do not want to be in the shadows of this larger conversation. And I think that's incredible and important. I think the conversation is more with Black Americans and us understanding that there are immigrants who look just like us. And we should be fighting for people who don't look like us, because when we are in solidarity and fighting together, that's when we see a greater change.

We should be fighting for people who don't look like us, because when we are in solidarity and fighting together, that's when we see a greater change.

AM: It would seem to me that part of the rule breaking around this involves a real embrace of intersectionality and understanding how race and immigration work hand-in-hand.

PC: Absolutely. And I think it's always worked hand-in-hand. This idea of whiteness is just a construct, and so anytime it benefits whiteness to change the category of who is white, that's the moment you see that powerful implications of race and this debate. For example, Irish folks, Italian folks — I mean, these folks weren't necessarily seen as white when they were immigrating to the U.S. They became white. We can even talk about white-passing Latinx people, who've become white under this construct. And I think that's absolutely important that we name that.

AM: What's the hardest rule you've ever had to break?

PC: Oh, man. Probably that I had to be with a cis man and be heteronormative and have a heterosexual relationship to have a good family, and have a supportive family. I grew up as a Jehovah's Witness and in a Jehovah's Witness household, with very clear tenets around how to behave as a woman and how to behave as an eventual wife. And that the child is good in a two-parent household — that's a father and a mother.

AM: What's the rule that you've broken that's received the most backlash?

PC: Being the co-founder of Black Lives Matter. [That’s where I’ve received] the most praise and the most backlash I've ever experienced in my whole entire life.

AM: What do you think is the rule people should break more often?

PC: I think specifically [for] white people — breaking the rule that their privilege allows them to do whatever they want, including, as we've seen time and time again, all these white folks calling the police on Black people. So, challenging that knee-jerk reaction, the fear — to break that inside of you.