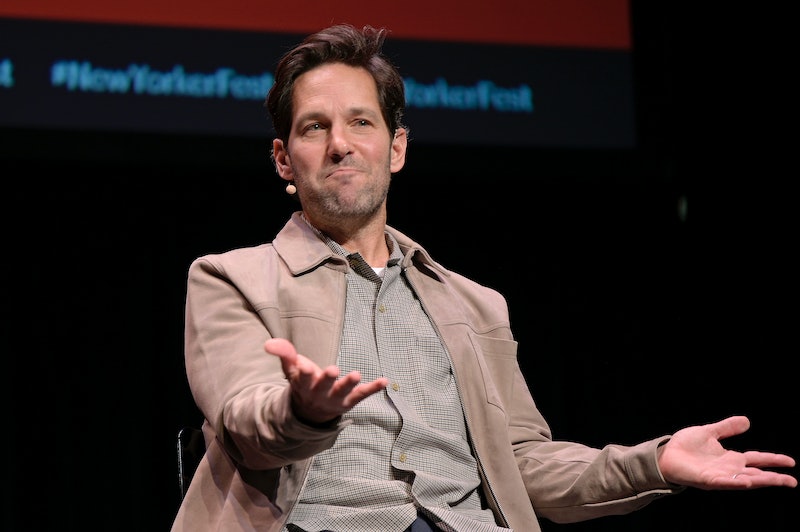 Those '90s kids whose walls were lined with Jack Dawson posters might want to send Paul Rudd a nice thank you. Apparently, Rudd encouraged DiCaprio to take the role in Titanic. When Rudd visited The Graham Norton Show he reminisced about his Romeo + Juliet co-star, revealing that he offered DiCaprio a little advice that may have helped him become King Of The World.

In the episode airing Friday (Oct. 18), Rudd told the British host that on his last day of filming Romeo & Juliet, DiCaprio was struggling to decide whether he should star in the James Cameron film. "We all went out out to bar... I was riding to the place with Leo and he said, 'I just got offered this movie and it's a big movie," Rudd said.

Rudd told DiCaprio that he thought this was an "incredible" opportunity and the two guys got to talking about the Titanic. Oddly enough, Rudd had a personal connection to the tragic ship. "My dad at the time made his living as a Titanic expert," he said. "He used to take people all over the world talking about Titanic. He would go to universities."

Still, DiCaprio wasn't sure he wanted to make the move from indie films to a big studio movie like Titanic. After all, this was a guy who was best known for small budget films like What's Eating Gilbert Grape?, which earned DiCaprio his first Oscar nomination. "He was saying, 'Well, I don't know what I'll do,' and I remember saying, 'You should do it,' " Rudd said.

Some heroes don't wear capes—though, Rudd technically does when he's Ant-Man—but, the actor swears he can't take too much credit for DiCaprio's success. "I don't think I had any say," Rudd said in DiCaprio's final decision. "But it is kind of interesting to think back on that."

It seems Rudd has been feeling rather nostalgic during the recent press tour for his upcoming Netflix series Living With Yourself, which has him starring alongside himself. While sitting down with Norton he also shared a particularly awkward story about Jennifer Aniston in which he rolled over his Object Of My Affection co-star's foot with a Segway on his first day on the Friends set.

“The producers' look of panic was as if to say, 'Is it too late to fire him? Has his character been established yet?'" joked Rudd, who played Mike Hannigan in the final two seasons of the series. "I felt awful. Such an inauspicious start." Clearly, everything worked out alright since Rudd later played Aniston's husband in 2012's Wanderlust, 10 years after that unfortunate accident.

Living With Yourself premieres this week, which means Rudd could still be visiting more talk shows. Hopefully, ready to share a few more stories like these. Even a decade or two later, they're worth the wait.

More like this
Zendaya Shares Intimate Photo With Tom Holland To Wish Him A Happy Birthday
By Bustle Editors
The New Bachelor Will Be Announced Next Week & Here Are The Top Contenders
By Grace Wehniainen
The First 'Percy Jackson & The Olympians' Teaser Comes With An Ominous Warning
By Grace Wehniainen
Nicola Coughlan Shared A Lady Whistledown Excerpt From ‘Bridgerton’ Season 3
By Grace Wehniainen, Alyssa Lapid and Sam Ramsden
Get Even More From Bustle — Sign Up For The Newsletter