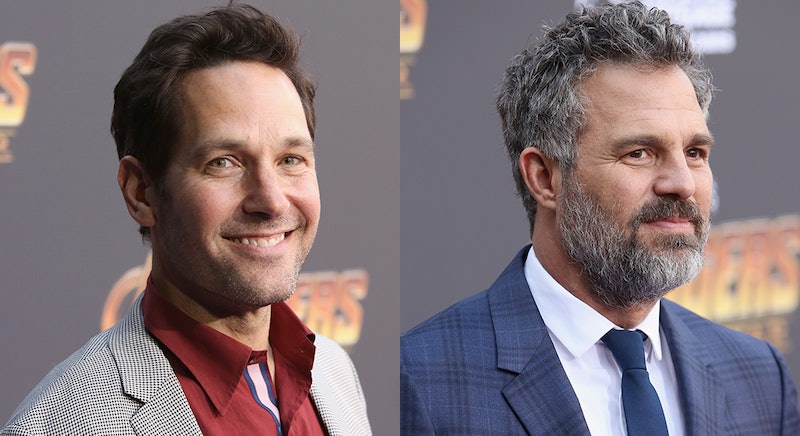 Paul Rudd isn't above pranking his fellow Marvel stars, but it's all in good fun. At the Avengers: Infinity War world premiere, Paul Rudd recreated an iconic Avengers meme at Mark Ruffalo's expense, but the Avengers star probably doesn't mind.

The brief moment was captured by Redditors, and ComicBook.com reported the news on Friday. While Ruffalo gave a red carpet interview at the movie premiere, Rudd snuck up behind him, mouthing, "Oh my God, it's Mark Ruffalo!" Rudd was recreating a moment from the San Diego Comic-Con in 2014, where Ruffalo snuck up behind him and mouthed, "Is that Paul Rudd?" while pointing to the Ant-Man star.

It's safe to say the two of them have a fun relationship with each other, and they're not afraid to prank each other from time to time. They clearly have a good rapport with one another, so hopefully Ant-Man and the Hulk will get some shared screen time in the next Avengers movie. Ant-Man wasn't in Avengers: Infinity War, but Paul Rudd is listed on the IMDB page for the franchise's next installent, which is expected in 2019. (And if pranks like these are happening on press tours for movies the two of them aren't even starring in together, just imagine how fun the press tour for the next Avengers movie will be.) Super News Live compiled the Infinity War clip and the Comic-Con clip into one video, below, and the result is too good.

ComicBook.com also points out that Rudd, in particular, seems to love being a part of the Marvel Cinematic Universe. Back in February, Marvel Studios took a photo to celebrate its 10th anniversary. The image features the multitude of stars who've brought Marvel comics to life on screen over the last decade. And while some of the actors appear fairly collected in the photo, Rudd is grinning ear to ear. At the time, Rudd told Yahoo of the photo,

"It just so happened that in the one [photo] they picked, everybody else was looking very serious and I'm sitting there grinning like the Cheshire Cat! All of that being said, it was very cool to be there. Stan Lee was sitting right there, and all the people from the movies. I remember thinking, 'There are a lot of people in the world who would be interested to be in this room right now.'"

Rudd may be playing it cool about the photo, but he's right — being a part of the MCU is pretty awesome. And it gives him the right to flash a giant smile, and photobomb Mark Ruffalo's interviews, when he wants to.

The teaser includes stars like Scarlett Johanssen, Benedict Cumberbatch, and Letitia Wright, genuinely asking why Ant-Man and the Wasp weren't in Infinity War. Chris Hemsworth's statement, meanwhile, is a bit saltier. "I don't remember being asked to be in their movie. Just saying," Hemsworth says in the teaser. It sounds like Marvel knows fans are eager to see more of Ant-Man, though. And while Paul Rudd may not have been in the newest Avengers movie, at least the Ant-Man sequel will be here soon.

The Marvel Cinematic Universe is full of plenty big-name celebrities, but it sounds like they're all one big, happy family. And Rudd and Ruffalo aren't the only ones who share a close bond. Chris Evans and Chris Hemsworth are friends, and the two of them had plenty of fun together doing press for Avengers: Age of Ultron. Hemsworth has also shared his admiration for Chris Pratt in various interviews and social media posts. Fans may want there to be a competition between all of the leading Hollywood Chrises — but in real life, it sounds like all of them are super close.