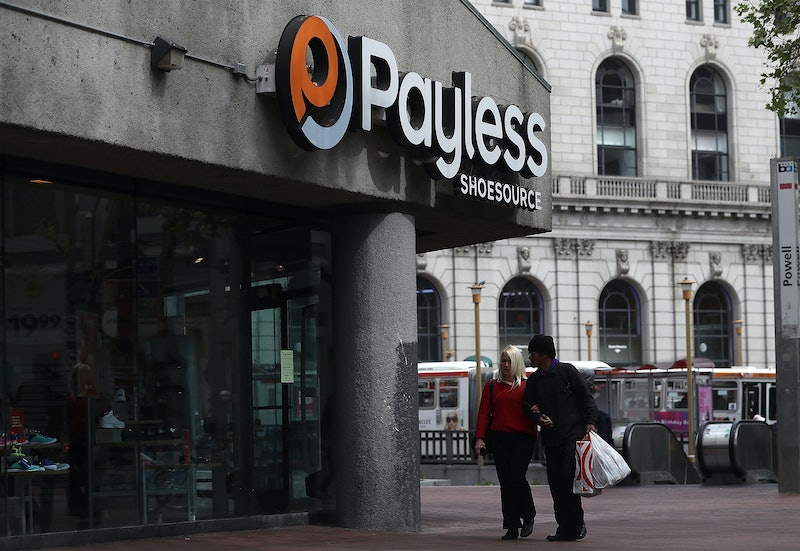 Bargain shoppers, it's time to say your final goodbyes to one of the most iconic, affordable shopping spots at your local mall. Payless Shoes is closing its stores, and the shoe source you went to for all your low cost footwear needs will no longer be a staple in your shopping trips going forward. According to Glamour, Payless is set to close its last 2,100 stores in the United States and Puerto Rico starting in March.

For lovers of a great bargain, it means it's time to say goodbye. The remaining locations will be offering liquidation sales on its merchandise. Vox reports that the company announced the closures on Feb. 16 and the sales began on Feb. 17 with plans for them to continue until May despite some stores planning to close as early as March. According to Forbes, by May, all Payless stores will be closed.

If you were hoping that it was just the chain's brick and mortar locations that were closing, unfortunately, that's not the case. Vox also reports that the brand will be shutting down its online component as well. Once all of the stores are closed and the site is no longer operational, the only place to purchase Payless shoes will be at their international locations and stores within Latin America.

Bustle has reached out to Payless for comment regarding the closure.

The news of Payless' closure may come as a surprise to some shoppers and those who haven't frequented the shoe store in some time. The company has actually been making headlines lately. Most recently, inclusive designer Christian Siriano teamed up with Payless for his 2019 New York Fashion Week show. The shoes worn by Siriano's models were actually made in partnership with Payless, and it's not the first time that the designer and the shoe store have worked together. Siriano and Payless created previous designs together in 2017, in fact.

In November 2018, Payless actually went viral thanks to its Palessi ad campaign. In case you missed the Twitter reactions to the campaign or didn't catch it as a YouTube or streaming service ad, the brand opened a faux luxury shoe store named Palessi in Los Angeles and invited a plethora of style influencers to attend the opening. The store was decked out in flashy lights, cool displays, and surprise shoes from Payless. As it turned out, the influencers who were invited couldn't even tell that the footwear on sale was from the discount retailer.

According to the video, those in attendance complimented the quality of the shoes' material, their "classy" style, and "sophisticated" look. Some were even so impressed that they paid up to $600 for a pair of shoes. As anyone who's ever stepped foot inside a Payless knows, $600 would probably get you 20 pairs of shoes from the store.

When the true nature of the store was revealed, the influencers were shocked, with one even asking, "Did I just pay too much?" after admitting she'd pay up to $500 for a pair of shoes.

While you may have been hearing more about Payless recently, unfortunately, it seems the publicity wasn't enough to keep the US stores afloat. Let's all take a minute and wish this iconic store a fond farewell.