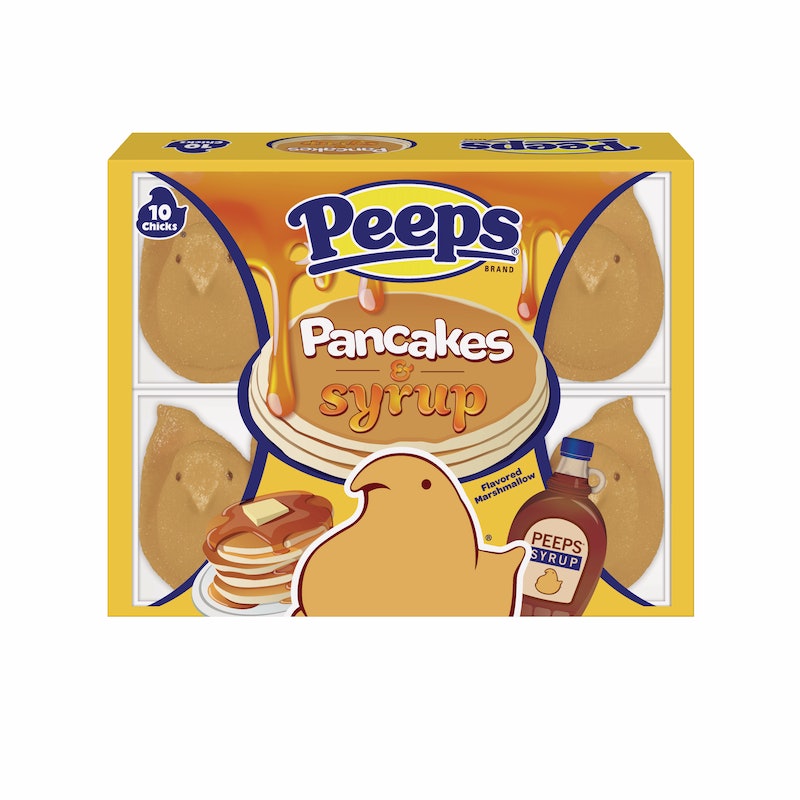 Now that we’re on the other side of Valentine’s Day, seasonal sweets and treats for the next set of holidays and observances have started to emerge. That includes Easter, of course — and since marshmallow Peeps are such a classic Easter basket treat, naturally, the Peeps 2019 Easter lineup has some pretty spectacular offerings. This year, for example, the collection actually includes Pancakes & Syrup Peeps. You heard me: Marshmallow Peep chicks made to taste like one of your favorite breakfast foods. Unorthodox? Perhaps. Fascinating? Absolutely.

Peeps’ 2019 Easter collection was announced on Wednesday and includes a bunch of new surprises — Peeps jelly beans, for instance, and cotton candy-flavored marshmallow birds. I won’t lie, though: The Pancake & Syrup Peeps get my vote for most unique offering. Arriving in the classic chick shape, Pancakes & Syrup Peeps are a toasty, light brown color — kind of like a perfectly golden pancake hot off the griddle. The product description doesn’t say much about how they actually taste; they’re merely said to be “a classic breakfast favorite transformed into a sweet PEEPS treat to enjoy any time of day.” I would bet, though, that they’re essentially maple-flavored Peeps with some really great marketing behind them. They come in packs of 10 and retail for around $1.69 to $2.09 per package.

Although they’re being billed as new for 2019, Pancakes & Syrup Peeps were around in 2018 — but only in one specific family of stores: They were a Kroger exclusive. If you didn’t happen to live in an area where Kroger operates, you were out of luck; however it seems they were popular enough among Kroger customers to warrant a national release this year, so if you missed out in 2018, now is your time to shine. (Note, though, that the price has gone up slightly; according to most accounts, last year’s version was only $1.50 per pack.)

There might not be a ton of current reviews of Pancakes & Syrup reviews available yet — they were just announced yesterday, after all — but there are a bunch of reviews of last year’s edition floating around the internet. On YouTube, for example, food reviewer The Endorsement noted that although he had originally expected the Peeps to be strongly maple-flavored, the “syrup” part of the Pancakes & Syrup combination was actually “very subdued.” He did think, however, that there was in fact a unique, pancake-like quality to the whole experience; ultimately, he found them to be “like a pancake with just a hint of maple syrup.” And, to be fair, I can see how the natural texture of your average Peep might help there; marshmallows and pancakes are both kind of springy, and mouthfeel can go a long way towards making one type of food taste like another.

Interestingly, though, many other reviewers felt that the syrup flavor was quite strong, but didn’t get much in the way of pancakes from the Peeps. YouTuber Tami Dunn, for example, described them as “definitely syrupy” — perhaps not something you’d want to eat a lot of, but pretty tasty in small doses. Meanwhile, the Impulsive Buy thought the scent was “more… maple extract than… a pancake breakfast complete with all the fixin’s” — an assessment that carried through to the flavor as well. Although the reviewer did “definitely get the syrup flavor,” they described it as “not like an authentic maple syrup flavor,” but “more of like a ‘pancake’ syrup flavor” — the kind of thing you expect from Mrs. Butterworth or other, similarly nebulous “breakfast syrups.” Added the reviewer, “I’m still not getting anything that reminds me of pancakes, though. Either they forgot to put it in, or the syrup flavor is overpowering it.”

Pancakes & Syrup Peeps are just one way that Peeps have managed to make themselves into unlikely breakfast foods lately; Peeps-flavored creamer and Peeps cereal have also both arrived recently, bringing a marshmallow-y blast to your morning routine. However, I don’t think anything will ever beat what the Impulsive Buy did with last year’s Pancakes & Syrup Peeps after they finished their standard taste test: They chopped up the Peeps, mixed them in with actual pancake batter, and topped the finished flapjacks off with maple syrup.

And apparently it actually worked! Wrote the food review site, “The Peeps kind of melt into the dough to create these little maple-marshmallow pockets in the pancakes, and the lake of real maple syrup on top just brings the whole experience full circle. Forget about cereal — THIS is the way marshmallows were meant to be eaten for breakfast!”

Want to give ‘em a try yourself? Peeps’ online product locator should be able to help you find them. Just select “Pancakes & Syrup Flavored Marshmallow Chicks” from the drop-down “Product” menu, input your ZIP code, and search away!