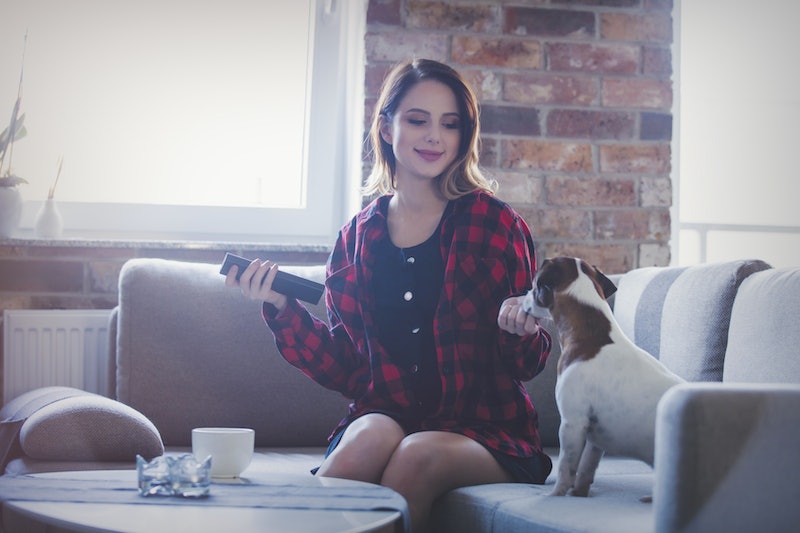 We all already knew pets make the best TV buddies. They don't talk, you don't have to worry about them stealing your Cheetos when you take a bathroom break, and they won't watch new episodes without you after promising they'd wait — the ultimate offense. Now, in news that surprises absolutely no one, a recent study reveals people prefer watching Netflix with their pets. Tell me something I don't know.

The study comes directly from Netflix, and basically confirms what we've been saying for years: pets are better than people in every way. Their results reveal when it comes to TV time, 84 percent of Americans have watched Netflix with their pets, and an astounding 71 percent of Americans think pets are the best partners for Netflix marathoning. As for the other 29 percent, well, I just don't know.

It all sounds a little too good to be true. Spending time with our pets is nice and everything, but what about having someone to connect with on a deeper level and have meaningful conversations with? What about a more committed relationship, where someone else fulfills your wants and needs? Only humans can do that, right? ...Right?

The Netflix study discovered 28 percent of us have relied on our pets for comfort while watching sad or scary scenes. (I totes held my dog's paw the other night right after Samuel L. Jackson got eaten in Deep Blue Sea.) And about that meaningful conversation? Our pets have that covered too. 27 percent of us have talked to our furry friends about the programming we're watching. (Me: "Neo, why did they have to kill off Samuel L. Jackson? He was in the middle of a really good speech. What do you think?" Neo: *licks privates*)

In other words, every single one of us could cut off all communication with all human beings and just have pets and probably be totally fine, if not better off.

But wait — there's more. We love watching Netflix with our pets so much that 47 percent of us have moved so our pets would be more comfortable, 17 percent of us have gotten them to stay and watch Netflix longer by bribing them with treats (turkey bacon coming in clutch), and 13 percent of us have changed the channel when we felt like our pets didn't like what we were watching, the study says. Don't judge me. What else was I supposed to do when Dood gave me that look that time I tried to put on Ozark?

You cant bet I never made that mistake again.

What is it exactly that we love so much about Netflix-marathoning with our fluffy buddies? Well, according to the survey, 40 percent of us think it's because they make the best cuddlers, obviously — an eight-pound dog who is seven pounds of fur makes for the best pillow. Twenty-three percent of us love that they don't hog the remote. Twenty percent are just happy they don't share any spoilers. And 18 percent of us love that our pets are always in the mood for another episode.

I didn't need a survey to confirm the obvious. I have full-length conversations with my dogs about everything from kibble to federal taxes — longer conversations than I have with most humans, mind you. I will happily lose all feeling in my arm while we're spooning so as not to disturb their slumber. I have no qualms about asking a friend to move to the left because they're blocking Neo's view of the TV.

But in case there were any doubts just how much we love our pets, well, Netflix went and closed that case.