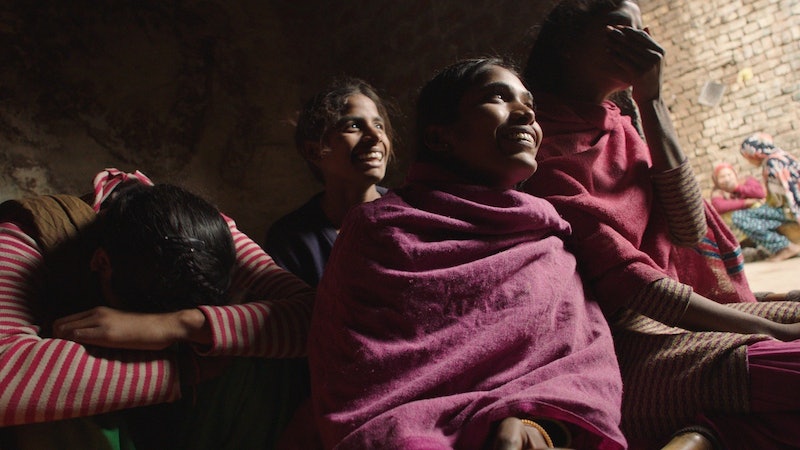 Sometimes, it takes one of the world's biggest stages to help break the biggest of stigmas. At Sunday night's 91st Academy Awards, one of the most powerful speeches was given by two women, director Rayka Zehtabchi and producer Melissa Berton, the filmmaking team behind Period. End of Sentence. The 25-minute documentary won the Oscar for Best Documentary Short Subject, after which Zehtabchi and Berton took the stage to celebrate women around the world and help strike down the taboos surrounding menstruation.

"I'm not crying because I'm on my period or anything," said Zehtabchi, "I can’t believe a film about menstruation just won an Oscar!" Berton went on to add that, "A period should end a sentence, not a girl's education."

After hearing their poignant speech you might be wondering what Period. End of Sentence. is really about, or where you can watch it. The good news is that the short doc is streaming on Netflix, so its super easy to check it out.

Period. End of Sentence. follows the story of women in a rural village in India who use a machine to create biodegradable and affordable sanitary pads for women in the surrounding villages. The machine was a contribution of "The Pad Project," a program created by high school girls living thousands of miles away in California and funded via Kickstarter. Per Deadline, six of the high schoolers are credited as executive producers on the film.

As Netflix's official synopsis details: "For generations, these women didn’t have access to pads, which lead to health problems and girls missing school or dropping out entirely. But when a sanitary pad machine is installed in the village, the women learn to manufacture and market their own pads, empowering the women of their community."

TIME reports that 23 percent of girls in rural India drop out of school when they reach puberty, because they can't afford sanitary products. And even if they can afford them, about 40 percent of schools don't have separate bathrooms for girls in which they can change them. "The stigma has created an environment that stymies female growth. While on their period, many women are prohibited from daily activities like visiting temples and cooking. Even in major cities, the discomfort around menstruation is evident," Kamakshi Ayyar's article continues.

So an Academy Award win for Period. End of Sentence. isn't just a win for the the filmmakers, it's also a wakeup call to the world that menstruation shouldn't be a taboo subject. It's a natural biological process and a part of many women's lives.

"After seeing the film I hope people understand this period stigma doesn't just effect those in India, we experience it in the United States and in other cultures as well," Zehtabchi told Glamour. "I also want viewers to realize that empowering women worldwide really starts with opening up the conversation around menstruation. We can implement feminine hygiene, but first we have to break the taboo."

And men need to get involved too, argued Zehtabchi. One anonymous Oscar voter told The Hollywood Reporter that men wouldn't be voting for the film because "it's just icky" for them to think about. Thankfully, it's clear that he was wrong and that those old fashioned views on menstruation, for many, are a thing of the past.

"They're 50 percent of the population and men need to be having these conversations and championing the film just as much as women are," Zehtabchi said to Glamour.

So men and women alike should head over to Netflix to check out Period. End of Sentence., and help bring menstrual equality to women around the world.