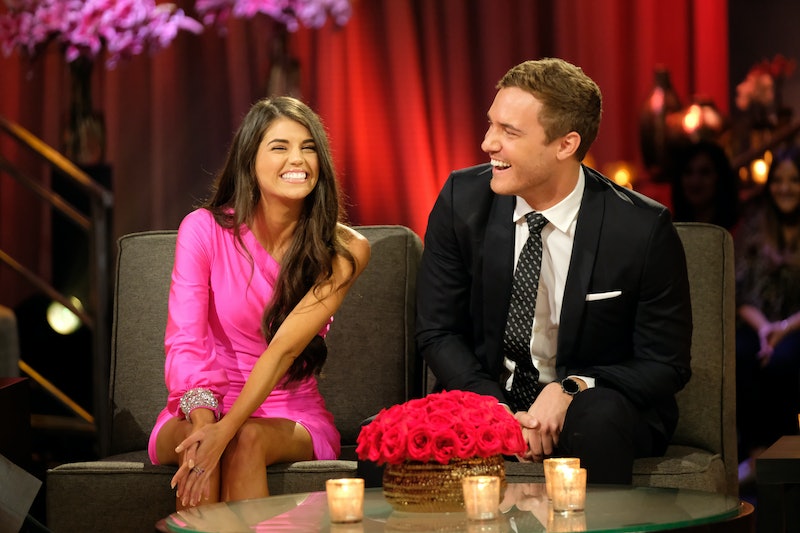 What was once thought to be an amicable split is quickly turning into a full-fledged feud. Peter Weber recently called out his ex Madison Prewett for the comments that she made about his love life, particularly when it comes to his relationship with Kelley Flanagan. On Tuesday, Madison claimed that Peter had texted her just "two days" before reuniting with the Chicago attorney, but now the former Bachelor is casting doubt on her statements.

“You’d think you’d have a little more respect for this situation given we both know there’s more to the story…” Peter commented on a Bachelor Nation fan page post on Instagram that featured details about Madison's Off the Vine podcast interview with Bachelor alum Kaitlyn Bristowe. Unfortunately, Peter didn't go into any further details on the matter, making difficult to know what exactly he's referencing. However, it's clear from the remark that he doesn't appreciate Madison's take on the situation, adding a further level of intrigue to their breakup.

After sending herself home prior to The Bachelor finale, Madison reunited with Peter shortly after he decided to break off his engagement to Hannah Ann, indicating that they planned on trying to make it work. Yet just two days after the finale, the two of them announced in separate Instagram posts that they'd decided to call it quits and go their separate ways.

"Madi and I have mutually decided to not pursue our relationship any further," Peter wrote at the time. "After a lot of honest conversations, we have agreed that this is what makes most sense for the two of us. The love and respect I have for Madi will continue to endure." The statements made it seem as though they were parting ways as friends, though in light of Madison's recent comments, that dynamic seems to have shifted.

“He was, like, calling me and texting me being like, ‘I miss you, let’s get back together,’” Madison claimed on the podcast, regarding the days leading up to when he began quarantining with Kelley in the wake of the coronavirus outbreak. “He had texted me two days before [he was with Kelley].”

This isn't the first time Madison has addressed Peter and Kelley's relationship. The Auburn native appeared to shade the duo in the comments section of a recent TikTok video she posted, which showcased several of Peter's exes with a few notable exceptions. This prompted one fan to ask "where is kelley," to which Madison replied, "with our ex lol." She later insisted on a Bachelor Instagram fan page that the comment was “just a joke” and that she has “all the love for them both.”

Kelley and Peter have claimed that they aren't dating, though Peter has admitted to not being opposed to the idea during an episode of The Viall Files. "Could I see that in the future? Yeah, of course," he stated on the podcast. "I'd be extremely lucky and very happy if that happened." Madison would most likely have a different take on the matter.