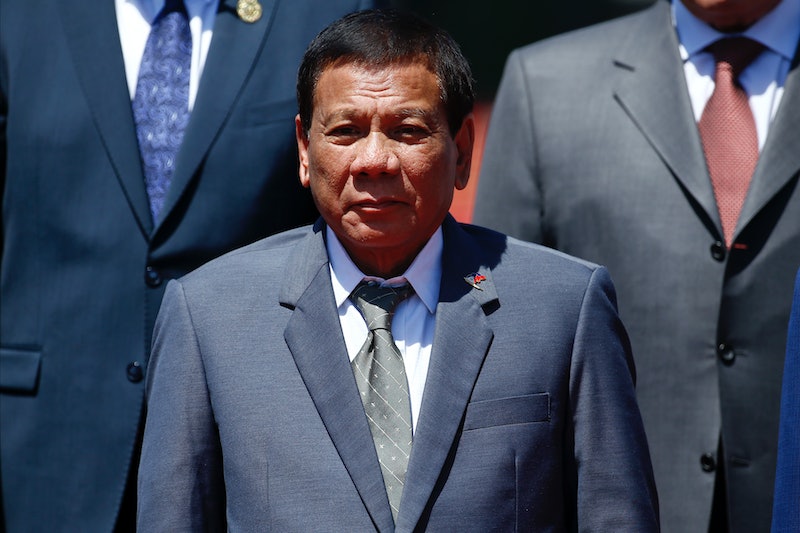 The president of the Philippines has certainly been drawing a lot of attention to himself over the past couple of years — and not in a good way. Now, he's done it again: Rodrigo Duterte ordered soldiers to shoot at women's vaginas, because he believes that the female rebels who his troops are fighting against are "useless" without their genitals.

Speaking about a group of former communist rebels, Duterte told his soldiers to specifically target the women rebels' vaginas.

Tell the soldiers. "There's a new order coming from the mayor. We won't kill you. We will just shoot your vagina." If there is no vagina, it would be useless.

Many people interpreted these remarks to mean not only that Duterte was telling the soldiers of the Armed Forces of the Philippines to target the women rebels in particular, but also that women are "useless" without their vaginas.

According to the official transcript of Duterte's speech, the audience laughed in response to the comment. Duterte's spokesperson also defended him:

You know, sometimes, these feminists are really a bit OA (overacting). I mean, that's funny. Come on. Just laugh.

This latest antic manages to combine a twisted sense of humor with a proposed violation of human rights.

Duterte isn't a stranger to rape jokes. In May 2017, he famously joked that his troops could commit up to three rapes before they would receive any punishment for their actions. During his campaign, he made a joke about the gang rape and murder of an Australian missionary. He's also made numerous misogynistic comments about his female political rivals, all intended to demean them. This sort of rhetoric has drawn condemnation from feminist and human rights groups all over the world, but his more violent alleged human rights violations are an even more defining factor of his presidency.

Most famously, Duterte has carried out a bloody war on drugs in the Philippines that has killed thousands of civilians and is unlikely to stop any time soon. Investigations have also shown that law enforcement officials under Duterte's leadership falsified evidence to help justify those extrajudicial killings. In the view of Human Rights Watch and other international watchdogs, these actions could constitute crimes against humanity. And yet, killing those assumed to be involved in drug-related crimes is one of Duterte's political hallmarks.

"If I make it to the presidential palace I will do just what I did as mayor," then-candidate Duterte said in 2016, as reported by Human Rights Watch. "You drug pushers, holdup men, and do-nothings, you better get out because I'll kill you."

Even as Duterte's been making enemies in the realm of human rights, he's made a friend in the White House. President Trump invited Duterte for a visit in April 2017, a controversial move — Duterte would be unlikely to receive a visa to the U.S. through normal channels, given his history of human rights violations. After receiving heavy criticism for inviting the strongman leader to D.C., Trump also said that Duterte was "doing a great job" — which then drew further criticism. The pair met twice while Trump was in Southeast Asia, and Trump said that they "had a great relationship" but declined to answer any questions about whether he had spoken to Duterte about the regime's human rights violations.

Also notable when considering Trump's relationship with the Philippine president is that Duterte's crude remarks haven't been limited to just female rebels resisting his army. He called President Obama the "son of a whore" after Obama questioned his human rights record, though he later walked the statement back. Obama canceled a meeting they had planned over it, and the two ended up shaking hands at a later summit.

Given what Duterte's spokesman has said about this latest comment, though, it seems unlikely that he'll walk this one back.