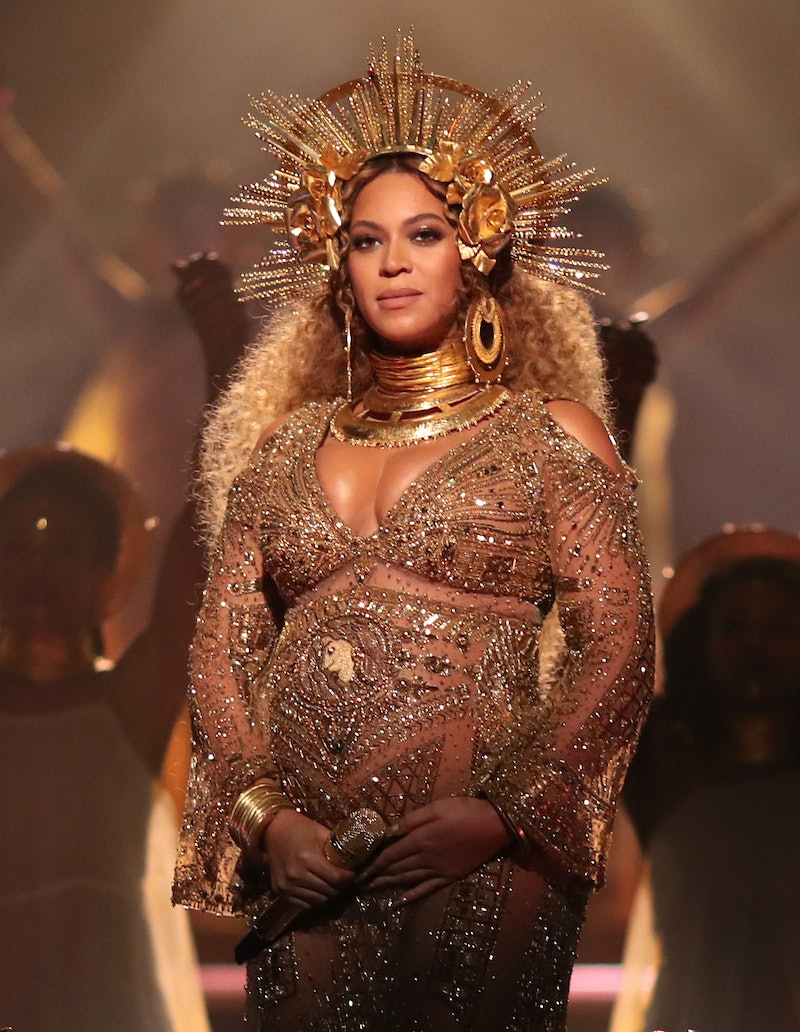 Beyoncé may be known as the world's most famous superstar, but she takes a more private approach when it comes to sharing anything related to her family. So, while photos and details about Beyoncé's twins, Rumi and Sir Carter, are rare, when the family does share those snaps, they're so meaningful.

The first time Beyoncé gave fans a glimpse at her two youngest children was back in July 2017, one month after she gave birth to them. In the instantly iconic Instagram photo, the songstress, looking like an absolute goddess, posed in a blue-and-purple ensemble as she cradled her twins. While Beyoncé and Jay-Z have rarely posted photos of the twins, during their On The Run II tour in June 2018, they did share footage from what appeared to a vow renewal ceremony that naturally included a glimpse of their entire family, per People. And, as the publication noted, concert-goers got to see the couple's twins in the footage highlighting the special moment.

Obviously, many fans weren't able to see the footage firsthand. But, enter Beyoncé's mother Tina Lawson, who posted a screenshot from the video on her own Instagram account in June 2018 to mark Rumi and Sir's first birthday. She captioned the photo with a simple and cute, "My babies❤️❤️❤️"

When the "Single Ladies" singer appeared on the cover of the September 2018 issue of Vogue, fans were treated to a behind-the-scenes video featuring Queen Bey's family. In the video, which featured some, very brief, moments from the set of her Vogue shoot, all of the singer's children — Blue Ivy, Rumi, and Sir — could be seen.

Of course, in addition to posing for photos for Vogue, Beyoncé also opened up for the first time about her experience with having her twins. Following her C-section, she related that she needed time to fully recover, "During my recovery, I gave myself self-love and self-care, and I embraced being curvier."

In her Vogue interview, the singer said that she came to love her body just as it was, and encouraged everyone else to do the same, "I think it’s important for women and men to see and appreciate the beauty in their natural bodies. That’s why I stripped away the wigs and hair extensions and used little makeup for this shoot."

Beyoncé continued to be all sorts of relatable, as she discussed her post-pregnancy, self-love journey:

"To this day my arms, shoulders, breasts, and thighs are fuller. I have a little mommy pouch, and I’m in no rush to get rid of it. I think it’s real. Whenever I’m ready to get a six-pack, I will go into beast zone and work my ass off until I have it. But right now, my little FUPA and I feel like we are meant to be."

Even though Queen Bey doesn't typically post photos of Rumi and Sir (which is, obviously, completely her prerogative), there have clearly been more than a few occasions were fans have, luckily, been able to get a glimpse of Beyoncé and Jay-Z's adorable kiddos.