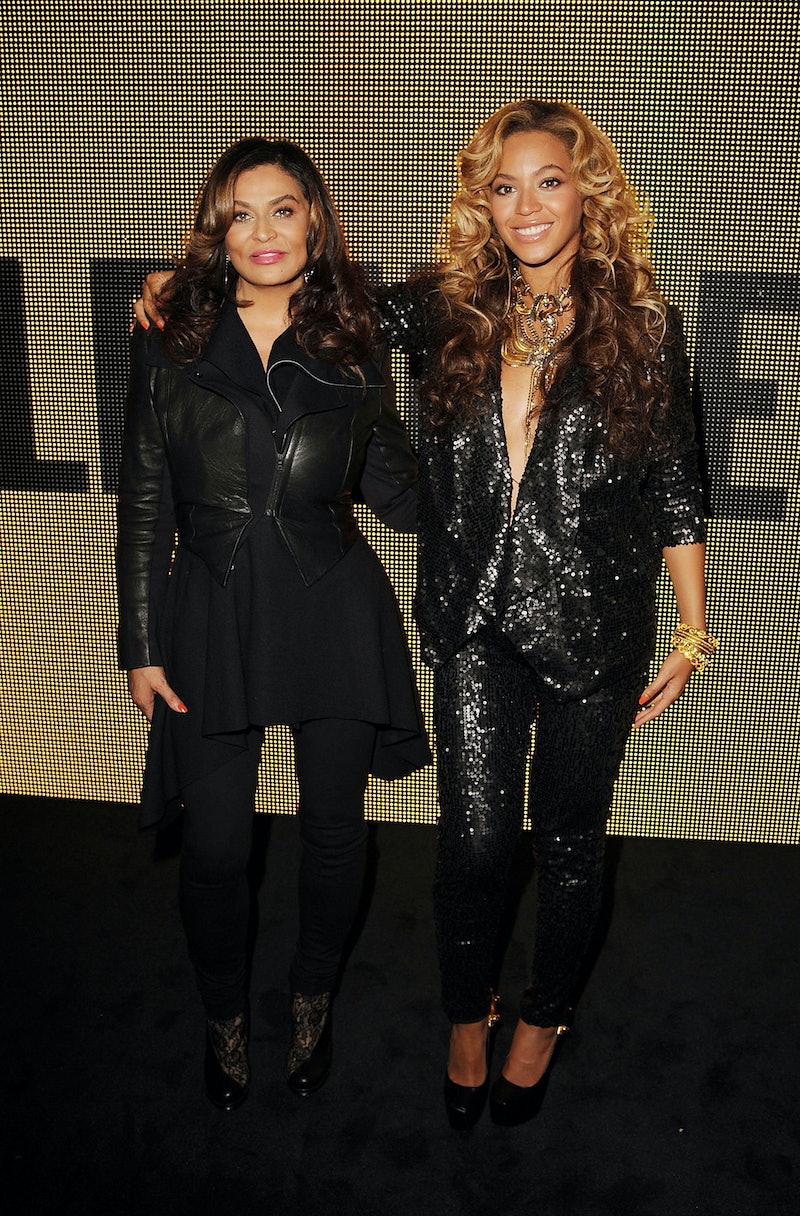 Leave it to Beyoncé's mom to take the sting out of the Beyhive's disappointment when it turned out that the photos Beyoncé and JAY-Z shared of their twins during their tour weren't actually Rumi and Sir Carter. Unlike images shown on the monitors during the June 6 opening night of the superstar power couple's On The Run II tour in Cardiff, Wales, Tina Lawson's photo of Beyonce's twins are indeed the real deal.

"My babies," the proud grandma captioned the heartwarming pic, along with three heart emojis. In the snap — which also flashed on the big screen as part of a video montage as the couple performed their duet "Forever Young" — the too-cute-for-words infants are in the foreground while their parents, with heads bowed, are also sharing a picture-perfect moment behind them.

Ms. Tina's Instagram post was certainly a consolation for fans, who were convinced the ultra private pair had shared a rare pic of the twins — but didn't get the picture, so to speak. At another point in the show, the couple had flashed an image where they are holding different babies, but Beyoncé's rep later told Buzzfeed the photo wasn't of the Carter twins, who will celebrate their first birthday on June 13. (Bustle also reached out to Beyoncé's rep, but did not receive a response.)

The last time the "Formation" singer gave us a glimpse of the cuties was in her epic July 2017 birth announcement, which she captioned “Sir Carter and Rumi 1 month today.” And with the post, Queen Bey reigned supreme, earning the distinction of 2017's most liked Instagram photo. Fans will have to wait and see if Lawson has comparable success.

The concert's video clip showed the couple, clad in all white and surrounded by family members (including Lawson and Beyoncé's sister Solange) and led many fans to immediately wonder if Beyoncé and JAY-Z renewed their vows. After all, the pair just celebrated their 10-year wedding anniversary in April.

Bey’s addressed the full circle journey of rumored infidelity and a marriage in crisis to reconciliation in her 2016 smash hit album Lemonade, as did JAY-Z with his Grammy-nominated album 4:44. Now, thanks to the help of a therapist, their marriage is stronger than ever, as the "99 Problems" rapper explained in a recent interview on My Next Guest Needs No Introduction with David Letterman.

"We did the hard work of going to therapy and you know, we love each other, right?," JAY-Z told Letterman. "So we really put in the work. ... I like to believe we’re in a better place today. But we’re still working and communicating and growing. And I’m proud of the father and the husband that I am today because of all the work that was done.”

As the pair continues to improve their relationship, they're turning the international jaunt into a family affair, with the twins and 6-year-old big sis Blue Ivy coming along for the ride, as reported by People in March. “They will all travel together and have a fun family adventure,” an unnamed source said of the buzzworthy tour that will continue through October, with the North American leg of kicking off in Cleveland on July 25.

Back in January, JAY-Z said he was thankful that his youngest weren't on the run themselves though — at least not yet, anyway. “We are in a beautiful time now because they are 7 months and they can’t move,” he joked in an interview with CNN’s Van Jones . “They can just coo … they just coo and you don’t have to, ‘Wait, wait, wait, wait.’ ... You know, they’re not running anywhere yet. We are going to enjoy these couple of months until they start running, and then it’s over.”

Whether Sir and Rumi are crawling, walking, or running, Beyoncé and JAY-Z fans will always welcome the chance to get a glimpse of the queen and king's little prince and princess.