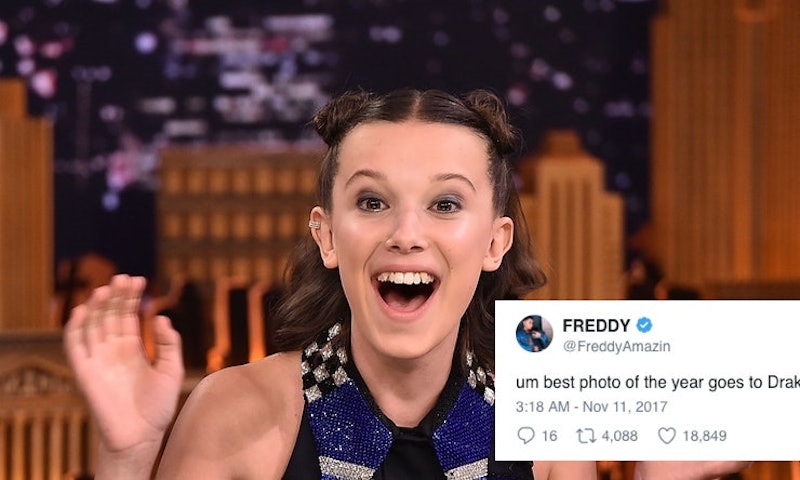 Doesn't it just warm your heart when you find out that some of your favorite celebrities are actually huge fans of each other? Really, you'd be hard pressed to find anyone in the world who isn't a huge fan of the Stranger Things kids these day. The same thing can be said for Drake. So when Drake and Millie Bobby Brown hung out on Friday night, it wasn't surprising that the internet collectively freaked out.

The two superstars have both been in Australia for the past week, so it was only right that they met up with each other. According to a post on Brown's Instagram, the 13-year-old actor is in the land down under attending this weekend's Supanova Comic Con & Gaming expo taking place in Brisbane and Adelaide. Meanwhile, Drake is set to spend the next few weeks down in Australia finishing up the last few weeks of his Boy Meets World Tour, which kicked off back in January. He performed in Brisbane on Friday night, so it's likely that Brown stopped by the show before meeting fans at the convention and got some time to exchange words with the rapper backstage. Both stars took to Instagram to share photos from the beautiful moment with the world, and they're just as marvelous as you would expect.

Needless to say, the photos — and the way Drake is seen totally fangirling in them — quickly became the internet's newest obsession.

This fan went ahead and awarded Drake and Brown with an imaginary photo of the year award and, to be honest, there's no point in arguing with that one.

Just look at the way he imitates her Eleven pose. These photos are really a work of art.

My entire mood has changed.

It's not clear what the two talked about, or even how much time they were able to spend hanging out, since being two of the biggest stars in the world right now probably doesn't leave too much time for chit-chat. But hopefully whatever they discussed had something to do with a possible collaboration in the future. No, really. Can't you just see it? They really seem to have a lot in common in terms of talent and skills.

Brown and Drake know what it's like to be on a popular television show at a young age. For any of you who can't quite recall, Drake got his start as Jimmy Brooks on Degrassi: The Next Generation when he was just a teenager. And, of course, Brown is being a total badass and defeating Demagorgons with her "gifts" on Stranger Things.

And then there's the music. Drake has been selling out shows and shattering records with his music for almost a decade, so there's definitely no denying that he's one of the most talented rappers out there. Meanwhile, Brown has shown the world that she has bars on more occasions than one. If you haven't seen her flawlessly reciting Nicki Minaj's verse from Kanye West's "Monster" on The Tonight Show, then you need to make that a priority ASAP. And once you finish watching that, you should do yourself a favor and learn every single lyric to the Stranger Things Season 1 recap rap that she performed for Jimmy Fallon a few weeks ago. She can rap, he can rap... it's almost like these two were made to be BFFs or something.

OK, so there's a pretty good chance that they won't actually release any music together in the future but you have to admit that it at least sounds cool, right?

Editor's Note: A previous version of this story incorrectly spelled Millie Bobby Brown's name as "Millie Bobbie Brown" in the headline. It has since been updated.