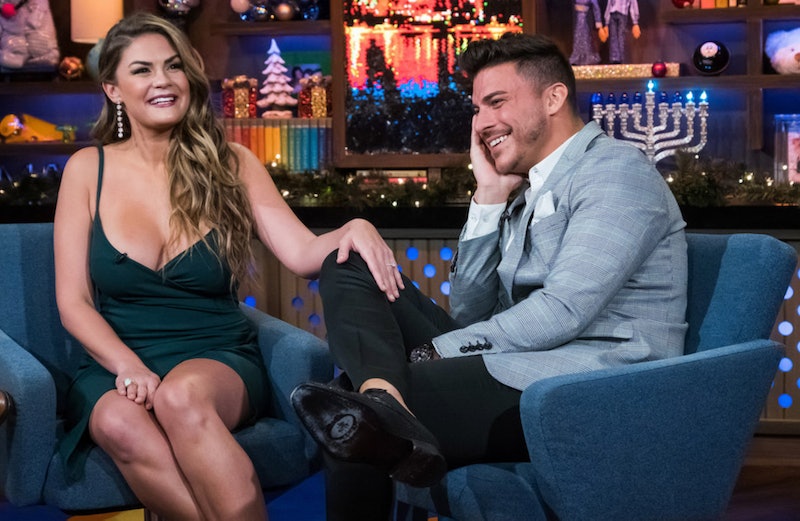 Brittany Cartwright and Jax Taylor of Vanderpump Rules are getting ready to throw the wedding of the SUR-ntury, and yes, they will let them eat cake. Brittany and Jax visited their wedding venue this week to pick out cake, drinks, and their menu. On Wednesday, the affianced Bravolebrities headed on over to the castle in Versailles, Kentucky, made a few decisions for their big day, and took some pictures and videos for the ol' Instagram. And it looks like the Pumpers sure had a productive time. After their trip to the Kentucky Castle, Brittany tweeted,

“Wedding menu, cake, and cocktails are all picked out and delicious! Now we need to find a great KY live band and DJ! Send me links to your favs if you have any suggestions. I’m so excited!”

Whoa, how about that. They still haven’t picked a DJ, eh? That means there is still time for James Kennedy to make nice with Jax and Brittany, land the wedding gig, and redeem himself with a DJ set fit for a castle. A Vanderpump Rules fan can dream, right?

Speaking of dreams, here are the future Mr. and Mrs. Cartwright-Cauchi at their dream wedding venue.

Ooh, would you look at that pond? Will Jax pull a Tom Schwartz and bathe in that lake the morning of his wedding? Can't wait to find out.

They also gave us a glimpse of the food and beverages that may or may not be SUR-ved to their wedding guests.

Important question: Will Tom Sandoval fly out to the wedding with the Tom Tom dry ice machine? Because that would be a fun romantic industrial touch.

Eating cake in a castle really isn't a terrible way to spend the day after Christmas.

Same can be said about hanging out on the roof of a castle.

On June 7, Jax jammed a massive ring box in his pant pocket, drove Brittany out to Neptune’s Net in Malibu, placed the massive ring box on a serving tray, and asked Brittany to marry him. They got right to planning the wedding, and while some of the major details have yet to be revealed, the location has been anything but top secret. As Brittany explained to People shortly after Jax popped the question this summer, the Kentucky Castle has always been the venue of her dreams. She told the publication,

In October, they officially booked the Kentucky Castle.

It sounds like Pump fans will almost SUR-tainly get to see Jaxany's wedding on the small screen. Jax and Brittany have not officially announced their date, but according to Us Weekly, sources say the couple will marry in the summer of 2019. Yes, they're apparently set to wed right in the middle of Pump Rules filming season, and thank Giggy for that.