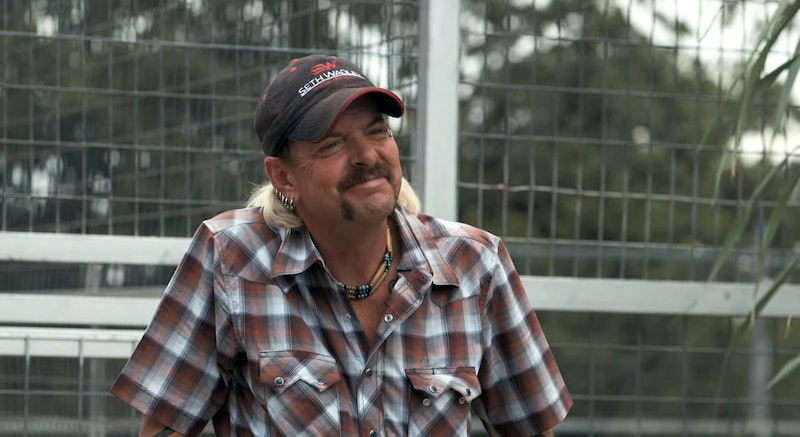 Netflix's docuseries Tiger King: Murder, Mayhem and Madness documents Joe Exotic's feud with a fellow big cat owner that leads to a murder plot and prison time. But a large portion of Tiger King features Joe Exotic's zoo before he was sentenced to prison. Joe Exotic, also known as Joe Maldonado-Passage, used to run the Greater Wynnewood Exotic Animal Park in Oklahoma where he claims in the documentary that he once housed hundreds of big cats.

Before Netflix's documentary, there was a Wondery podcast about Maldonado-Passage and his rival Carole Baskin. Podcast host Robert Moor also published a story on Joe Exotic in New York Magazine's Intelligencer. Moor reported that when the zoo opened in 1999, Maldonado-Passage initially named it the Garold Wayne Exotic Animal Memorial Park, referred to as G.W. Zoo, after his brother. Jeff Lowe bought the zoo from Maldonado-Passage in February 2016, but Joe Exotic continued to oversee the zoo until 2017, according to The Oklahoman. Now it's known as Greater Wynnewood Exotic Animal Park.

Greater Wynnewood Exotic Animal Park has a Facebook account if you want to see what the park looks like today. The zoo currently doesn't have an Instagram account under that name, but that may be because Lowe is rebranding. He plans to relocate in the summer of 2020 to Thackerville, Oklahoma, and there is already established an Instagram account for the newly-named Oklahoma Zoo. This account is presumably the rebranded Wynnewood account since there are photos dating back to December 2017.

To see photos from when Joe Exotic ran the park, he still has an active Instagram account.

The photos he shared often featured the big cats, like tigers, lions, and cougars, that he kept. But he also would insert his political feelings, advertisements for his own election bids, and even calls to close down Big Cat Rescue — Baskin's operation — into the captions.

On the Instagram account for live web show he used to host for G.W., JoeExoticTV.com, he also has photos with him Shaquille O'Neal, who is featured in footage in the documentary.

His Instagram also features other animals that had been at Wynnewood, including owls, wolves, camels, kangaroos, monkeys, and apes, among many others.

As the Tiger King shows, Joe Exotic's zoo was often investigated for the mistreatment of these exotic creatures. PETA compiled a list of the citations issued by the U.S. Department of Agriculture (USDA) to Maldonado-Passage for his failure to comply with the Animal Welfare Act when it came to many of the animals he had, including lions, cougars, bears, tigers, wolves, spider monkeys, lemurs, and deer. The citations dated back to when he first opened. So though the animals are beautiful to look at, these photos of Joe Exotic's zoo show the exploitation of wild animals that he and many other private zoo owners still make money off of today.