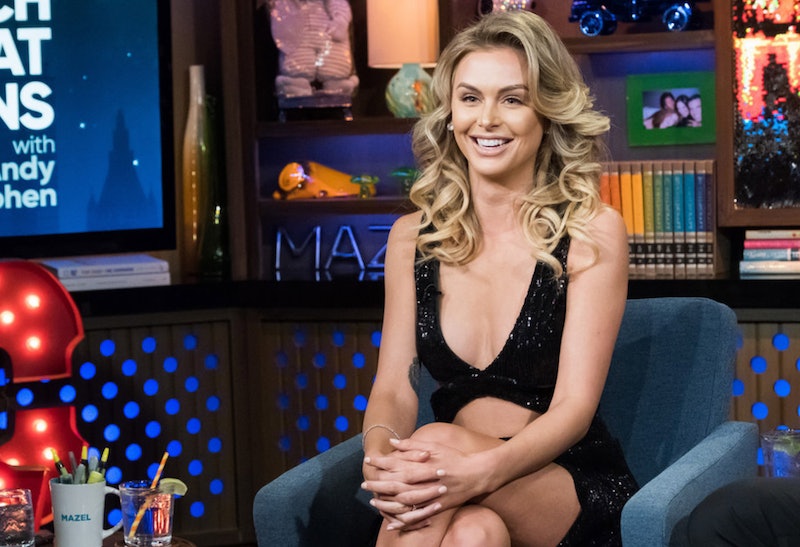 A Vanderpump Rules star is at arguably the most prestigious film festival on the planet and it could not feel more right. On Tuesday, May 15, Variety shared a video of Lala Kent at the Cannes screening of Solo: A Star Wars Story. And in the video, she is standing with 50 Cent and John Travolta. Why is Lala from Vanderpump Rules at the 2018 Cannes Film Festival, you ask? And how did Lala, 50 Cent, and Travolta end up palling around on a red carpet together? Here is the short and sweet answer: They are all connected to Pump Rules enigma and established film producer Randall Emmett.

Emmett, aka “My Man,” and Lala have been dating for the last two years, but only went public with their relationship earlier this year. Though he has never actually appeared on Pump Rules, Emmett is a major part of The Real Housewives of Beverly Hills spin-off. He has been mentioned in several im-pasta-sioned arguments between DJ James Kennedy and Lala; his private jet — er, the PJ — has become a Pump Rules star in its own right; and he apparently gives Martin Scorsese all of the latest and greatest Pump Rules gossip. (May we never let go of the Pump Rules Season 6 reunion moment when Lala told the rest of the Pump cast that Scorsese is a fan of the show.)

So, what brings this Vander-couple to Cannes? Showbiz, baby. Emmett is one of the producers of John Gotti biopic Gotti, which premiered at the festival this year. Here's Lala, Emmett, 50 Cent, Travolta, Kevin Connolly, and Kelly Preston at the aforementioned Solo screening.

And wouldn't you know it, Gotti just so happens to be what brings Travolta, Kelly Preston, and Kevin Connolly to Cannes, too. Real-life husband and wife Travolta and Preston play John and Victoria Gotti, and Connolly is the movie's director. 50 Cent is not in Gotti, but he and Emmett have worked together on a number of projects, including TV series Power, feature film Escape Plan, and direct-to-video drama All Things Fall Apart.

Naturally, the Pump Rules fandom is so thrilled to see the "Boy" singer bring the Sexy Unique Heat to Cannes.

Never stop putting that Coachella dream out in the universe.

Stick that in your baby bottle.

Lala has been generous enough to document her Cannes adventure on Instagram. Here she is with Emmett:

Here she is by the water:

Here’s Lala, 50 Cent, and Emmett on their way to the Gotti premiere:

Just two and a half years ago, she was one of the supporting characters on Pump Rules who was (temporarily) banned from Watch What Happens Live. And now she's a Pump Rules superstar who has the coveted reunion chair right next to Andy Cohen, the artist behind a song that hit number one on the iTunes electronic chart, and a Cannes Film Festival attendee. She's really doing it. May she never stop giving them Lala.

More like this
Is Dua Lipa Dating Trevor Noah? New Photos Show Them Kissing & Hugging
By Brian Anthony Hernandez and Martha Sorren
Jonathan Bailey’s BTS ‘Bridgerton’ Photos Celebrate 6 Months Of “Kanthony”
By Stephanie Topacio Long
Netflix Reveals First Look At Wednesday In The 'Addams Family' Spinoff Series
By Bustle Editors
Kesha Is Down To Be The Next Bachelorette
By Jake Viswanath
Get Even More From Bustle — Sign Up For The Newsletter