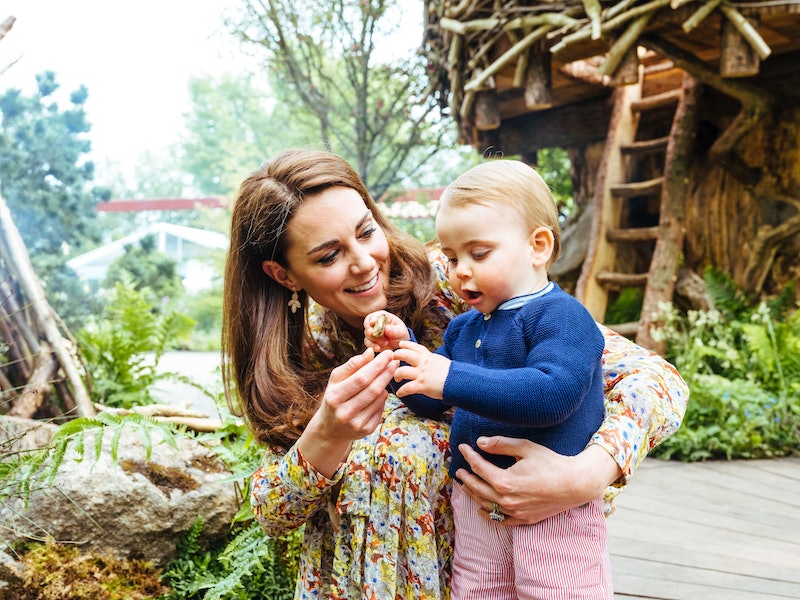 The Duchess of Cambridge has co-created a garden for one of the UK's most prestigious flower shows, and the Duchess' family were among the first to visit. The garden is called Back To Nature, and the photos of George, Charlotte, & Louis enjoying Chelsea Flower Show and their mother's plot give the sweetest insight into the royal family's private life.

The royal children looked like they were having the time of their lives as they played in the garden during their visit on Sunday May 19. According to the BBC report, George, Charlotte and Louis played in the garden plot for an hour. In photos of the day, Kate and Louis can be seen playing with rocks, and the tot seems to be loving it. And, in a video of the family in the garden, George and Charlotte can be seen exploring barefoot, climbing through the streams, and dipping their toes in the water. In the video, George and Charlotte also enjoy playing on the rope swing, which looks to be a centre piece in the zen garden.

According to the Evening Standard, the Back To Nature garden has a signature touch from the royal children. The newspaper reports that the garden is full of moss, leaves, and twigs collected by the children, which were then incorporated into the surroundings of the campfire. The family also collected hazel sticks that were used to make the garden's den. Adorable.

In an interview with the BBC, Kate said:

"I really feel that nature and being interactive outdoors has huge benefits on our physical and mental well-being, particularly for young children."

"I really hope that this woodland that we have created really inspires families, kids and communities to get outside, enjoy nature and the outdoors, and spend quality time together."

Kate is definitely leading by example in these pictures with her family.

According to the Daily Mail, Kate's involvement in Chelsea Flower Show was announced earlier this year. Hello! reports that the Duchess worked alongside award-winning landscape architects Andrée Davies and Adam White to create the Back To Nature garden. The team have reportedly been working on the plot for the past six months.

The BBC reports that the garden is based on the Japanese concept of forest bathing. "Japanese scientists found two hours of mindful exploration in a forest could reduce blood pressure, lower levels of the stress hormone cortisol and improve memory and concentration," the BBC writes.

RHS Chelsea Flower Show is a prestigious gardening event held on the grounds of the Royal Hospital Chelsea in London. The Duchess' feature this year is a design debut for her, according to House Beautiful, and it was created to help people and families connect with nature.

The flower show runs from May 21-25 2019 and there are currently a few tickets remaining. So, if you want to see the Duchess of Cambridge's Back To Nature garden, hurry and get your ticket ASAP.