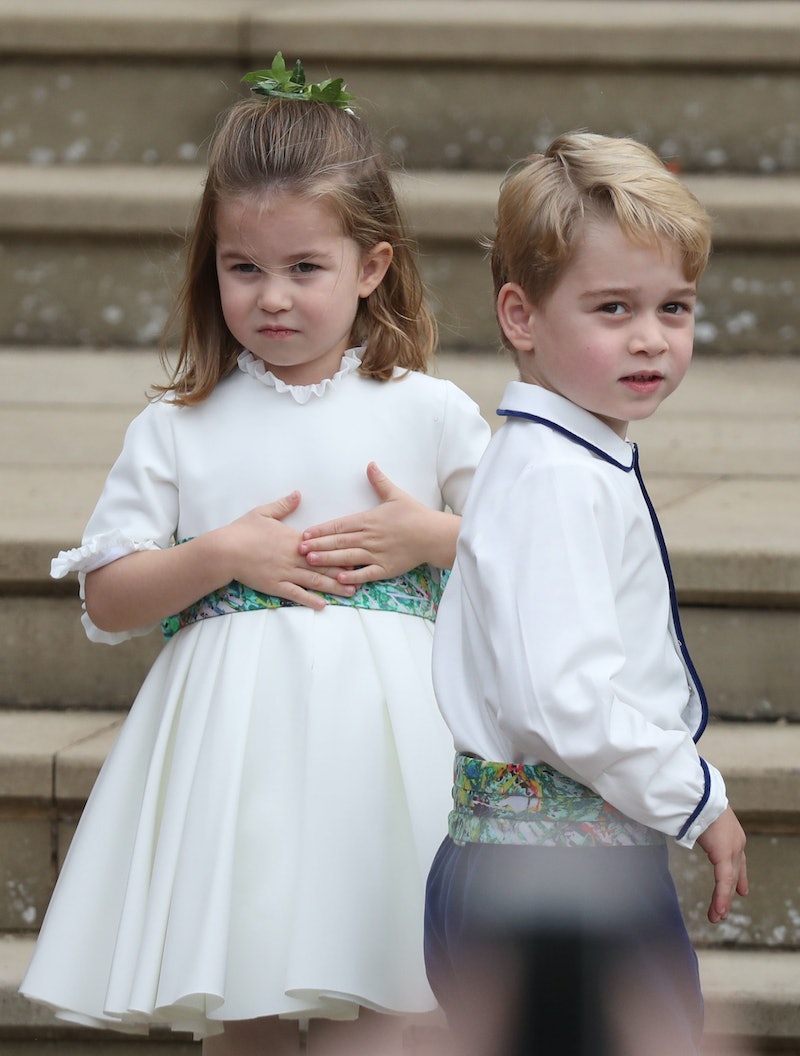 Just like many non-royals, Prince William and Kate Middleton are showing off their growing family in their 2018 holiday card. Beyond the joy of getting to see Prince George, Princess Charlotte, and Prince Louis, there's a heartwarming detail about Princess Charlotte's sweater in the royal family's Christmas card that royal fans will want to take note of. Even if you aren't lucky enough to be on the mailing list for the British royal family's holiday cards, common folk can still see the photos used in their season's greetings courtesy of the internet. And in Middleton and William's family photo, Princess Charlotte is wearing a sweater that clearly holds some meaning to the family.

Unveiled on Dec. 14, Prince William and Middleton's family photo for their Christmas card features them sitting on a tree branch with their three children — 5-year-old George, 3-year-old Charlotte, and 8-month-old Louis. The autumn picture was taken by photographer Matt Porteous at the family's Anmer Hall home. (Queen Elizabeth II gave her grandson and his wife the house as a wedding present.) The adorable photo shows Middleton holding Louis while Charlotte and George playfully hang onto their parents. While the whole family is dressed pretty casually with the Duke and Duchess of Cambridge in jeans, Charlotte's sweater stands out because it's a piece of clothing that the young princess and her older brother George have worn before.

As PEOPLE reported, Charlotte's blue cardigan is made by the Spanish company Fina Ejerique and the clothing item has become somewhat of a family staple. When Prince George was just 2 years old, he wore the knitted sweater in an official family portrait for Queen Elizabeth's 90th birthday. Two years later, Princess Charlotte wore it in a photo of her kissing her newborn baby brother Louis.

"We are really proud that our cardigan has become one of their favorite pieces, worn by both Prince George and Princess Charlotte. It's really a great honor," Fina Ejerique's creative director, Ana Perez, told PEOPLE.

Besides the sentimentality of Charlotte wearing a sweater that has a connection to both of her brothers, the photo also sends a great message about reusing clothing. Charlotte's mom is no stranger to wearing a clothing piece again. For Prince Harry and Meghan Markle's wedding, Middleton wore a dress she had worn twice before — at Charlotte's christening and during a birthday celebration for Queen Elizabeth. While that seemed intentional as to not take away any attention from Markle on her wedding day, Middleton has reworn other pieces for less monumental events.

Not only does this reuse show an appreciation for a garment, but it's environmentally and fiscally responsible. (The latter is particularly worth a mention since a portion of the royals' income comes from the British public.) With the BBC reporting on how fashion waste impacts the U.K. and beyond, it's important that a major public figure like Middleton highlights that it's acceptable to rewear an outfit. Plus, just like when she rocks a pair of $40 jeans, it makes the Duchess of Cambridge and her family feel even more accessible.

Charlotte wasn't the only one of Middleton's children to wear a hand-me-down in the Christmas card photo. PEOPLE noted that Louis is wearing his older brother's shorts. Actually, George wore those very same shorts for his official Christmas portraits in 2014. So, just like the cardigan, this clothing item has become a family tradition.

Prince William and Middleton have enough money to make it so their children would never need to wear hand-me-downs. But this reusing of clothes between siblings is a wonderful display of the holiday spirit. Because sharing and family togetherness are some of what the Christmas season is all about.