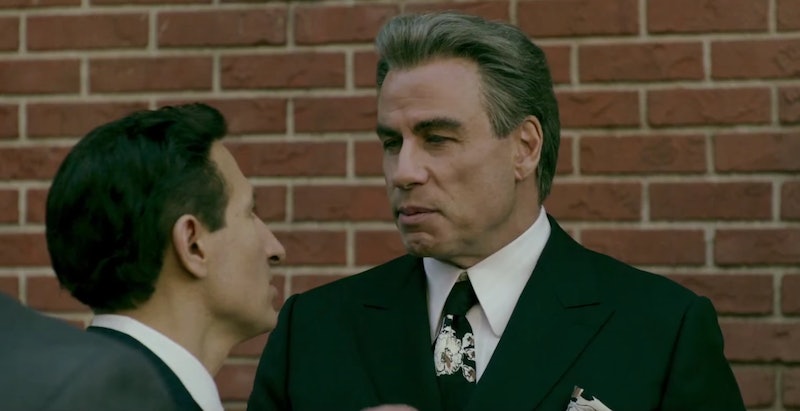 If you're a fan of gangster movies, then you'll be excited to know that a new movie about the ultimate boss, John Gotti, is hitting theaters on June 15. The movie, aptly called Gotti, stars John Travolta as the titular antihero, and when you look at photos of the Gotti cast compared to real people, you'll quickly realize that the new film might be more realistic than any other mobster movie before it. While the actors bear a striking similarity to the real-life people they're playing in Gotti, perhaps the most telling aspect of the movie's verisimilitude is the fact that John Gotti's son, John Gotti Jr., was involved in the making of the new film.

According to The Hollywood Reporter, John Gotti Jr., originally signed on to make a movie about his father over seven years ago. Eventually, the movie based on John Gotti Jr.'s book, Shadows of My Father, got off the ground. And in a recent article posted by the New York Post, John Gotti Jr. applauded Travolta's performance as his father in the film. "I thought John did a tremendous job looking like him, although JT is a lot taller and has different color eyes," said Gotti Jr. However, he wasn't very impressed by the movie's portrayal of himself. "Spencer Lofranco, who portrays me, has a Canadian accent and doesn’t look like me," Gotti Jr. said in the Post.

Nobody knows the characters involved in the Gottis' story better than John Gotti Jr., but you can be the judge of how similarly the movie's actors look like the real-life people who played a part in John Gotti Sr.'s life.

Although some physical similarity is there, John Gotti Jr. believes that Travolta's didn't quite hit the mark. "JT doesn’t have my father’s natural swagger," he told the Post.

The real John Gotti was a powerful boss of the Gambino family in New York City until he was convicted of five murders and many other charges in 1992. While he was sentenced for life, he passed away in 2002, dying in prison from throat cancer.

Travolta's real-life wife plays the wife of Gotti. Of Preston's performance, Gotti Jr. told the Post, "She did a solid job. She looked the part and captured my mom’s wit and combativeness."

Victoria DiGiorgio Gotti is still alive, and probably has some thoughts on this movie.

Lofranco portrays, John Gotti Jr., aka John A. Gotti, who ended up working for his father.

John A. Gotti was arrested in 2008, but was released a year later after a judge declared a mistrial. In 2015, he published Shadow of My Father.

DeMeo's character plays an important part in the movie, even if he wasn't a major figure in the Gambino family.

The Real Sammy "The Bull" Gravano

"The Bull" eventually had an major role in helping the FBI identify members of Gotti's crime syndicate.

Vince plays another important figure in the mob family.

Keach, who has voiced multiple Simpsons characters, plays the role of Dellacroce.

According to THR, Dellacroce served as Gotti's deputy for a time.

Gotti is certainly a wild story, and it's brought to life by many fascinating actors.