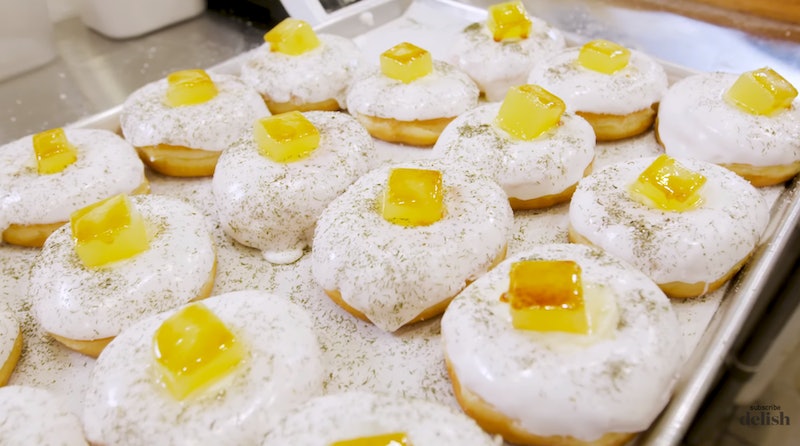 Pickles don’t tend to go viral on the internet quite as often as, say, Frappuccinos or rosé, but they do still have a solid following — and now, they’re having their moment in the sun: Pickle doughnuts exist, and right now, you can get them at a Missouri-based doughnut shop known for its wild concoctions. Officially, the doughnut is called the Pickle Cheesecake Donut, which is, um… interesting-sounding. I’ll be honest: I am in the “No, thank you” camp here. Then again, I also don’t really understand the obsession with pickle juice and/or why one would want to drink straight brine, so I realize that I am probably in the minority here. That’s fine. If the idea of pickle doughnuts that also somehow involve cheesecake fills you with joy and sunshine, go forth. You do you. And I will stand well out of the way as you do so.

For the seventh episode of Season 2 of their web series WTFood?, Delish took a trip to Hurts Donuts in Springfield, Mo. for one reason, and one reason alone: To make pickle doughnuts. Indeed, Delish and Hurts actually partnered up to make the Pickle Cheesecake Donut available for a limited time — although this isn’t the first time Hurts has dipped their toe into these particular brine-y waters.

According to Delish, Hurts’ lead baker, Ian Carleton, dreamed up the idea as a way to celebrate National Pickle Day in 2017. The doughnut doesn’t appear to have actually been released on National Pickle Day, which occurs on Nov. 14 each year; however, it was available for one day, and one day only, on Dec. 21. According to local ABC News affiliate KCRG, the doughnut’s appearance was part of Hurts’ “12 Glaze of Christmas” promotion.

It’s also worth noting that the 12 Glaze of Christmas pickle doughnut looks a little different from the Pickle Cheesecake Donut. From what I can see, the former is a yeasted doughnut with a glaze that presumably includes pickle brine as an ingredient; apparently it was also somewhat subtle in its flavor. Said customer Dennis Yowger to KCRG in December, “It’s got the sweetness of the pickle, but you don’t get, like, the whole overwhelming pickle taste to it. But it’s just enough that you can taste the sweet pickle in it.”

The Pickle Cheesecake Donut, meanwhile, is a lot more elaborate. Delish describes it as a yeast donut that’s been “stuffed with a pickle cheesecake filling, dipped in vanilla icing, sprinkled with dried dill, and then topped with pickle juice cubes that are basically the texture of Jell-O.”

The video goes a little more in depth about what exactly goes into the making of that “pickle cheesecake filling” (which is good, because I am sure I am not the only one who read that phrase and thought, “WTF is that?”). It starts with a “cheesecake base”; then, both pickle brine and chopped pickles are added to the mix, which has the (perhaps unintentional, but maybe not?) side effect of turning the mixture green.

The doughnuts themselves are actually fried with their centers intact; then, the centers are pushed down, the whole thing is dipped in vanilla icing, dill is sprinkled on top, and lastly, the pickle cheesecake filling is piped into the well in the center. As a finishing touch, one of those Jell-O-esque pickle juice cubes is tossed in sugar and placed lovingly on top before being fired up with one of those little kitchen blow torches I thought were used primarily for making crème brulée, but which apparently have a wide range of uses (like crisping up the top of a pickle juice cube).

Take a look at the whole process — including Delish deputy editor Lindsay Funston’s reaction to how the doughnut actually tastes — here:

Also, fun fact: Hurst is not the only bakery ever to have created a pickle-flavored doughnut. VON Doughnuts in Toronto, which opened around the beginning of 2014 per Toronto Life, once served a Dill Cake doughnut which was topped with sliced pickles, according to NUVO Magazine. Alas, that particular doughnut doesn’t appear to be on the menu anymore; however, there is still a similarly brine-y option available: The Malt Vinegar doughnut, which is topped with crispy kettle chips.

Hurts Donuts’ Pickle Cheesecake variety is only available for a brief amount of time; it became available on March 28, and according to Delish (who, you’ll recall, partnered with Hurts specifically to bring pickle doughnuts to the masses), you'll be able to get it for the next two weeks. Happy snacking!