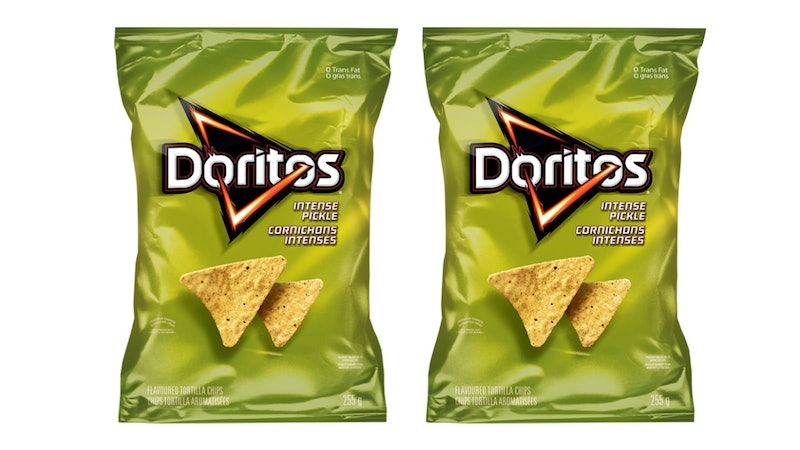 What would you do if I told you there was such a thing as pickle-flavored Doritos? Would you laugh in my face? Would you give an incredulous guffaw? Would you chuckle and say mildly, “Surely not! How could that be?” Well, uh… get your best reactions ready, because guess what? Doritos Intense Pickle tortilla chips are, in fact, a thing. They’re apparently a delicious thing, at that — so naturally, they’re only available in one place.

That place, of course, is not the United States. Because clearly we are not allowed to have nice things. I mean, just look at the state of us.

As is often the case, I discovered the existence of Doritos Intense Pickle chips while idly searching for pickle-flavored things on Amazon. (I have some… odd hobbies.) “Huh,” I thought after stumbling upon the listing. “Pickle Doritos? How have I not heard of these before?” The Amazon page for the item, which is listed by a third-party seller called Canadian Sweets, Treats, and Other Specialties, had precious little information on it, so I began to do a little more digging. What I found was both encouraging and disappointing: These Doritos are highly, highly reviewed… and, as the Amazon seller name suggests, also Canadian in origin.

According to the Doritos Intense Pickle page on the Canadian Doritos site, the chips allow you to “enjoy the extreme crunch and explode-in-the-mouth flavor as you ad your friends dive into a bag of Doritos Intense Pickle flavored tortilla chips”; we’re encouraged to “savor the tanginess of the intense pickle flavor in every bite.” And indeed, that’s the snacking experience most of the reviews I’ve found online support: Crunchy, pickle-y goodness in a bag of chips.

I’m not sure exactly when the flavor was first introduced, but the earliest review I’ve found dates back to 2011. At the time, Edmonton-based snack food website NEAROF sang their praises, describing them as “slightly creamy with a whole lot of dill, garlic, and sour vinegar, all on top of the standard Doritos tortilla chip base”; they had the “sour zip of salt and vinegar [potato] chips,” wrote NEAROF writer and editor Iain Illich, “but the garlic and dill are a knockout addition.” Illich concluded, “I would happily buy them again.”

Other reviews concur. In 2014, Junk Food Guy, who was able to get his hands on a package courtesy of a friend in Canada, similarly described the chips as initially seeming a bit like salt and vinegar potato chips; he also noted there was a certain creaminess to the snack, although he used the Cool Ranch Dorito flavor as a specific reference point: “The initial flavor was tangy [and] sour, but with a nice pickle and dill taste. It held on well, as I chewed, and then faded quickly to a nice, creamy, Cool-Ranch-ish flavor, which I think was a good complement to the initial zing,” he wrote. It helps if you like both pickles and dill; if you don’t, the chips may not be your jam, but if you do, wrote Junk Food Guy, “then you will really enjoy these chips!”

Additionally, travel blogger Brian Cohen of Boarding Area’s The Gate noted in 2017 that Doritos Intense Pickle chips “reminded me somewhat — but not completely — of the intensity and flavor of a real dill pickle which one can purchase at an authentic delicatessen in New York.” He added, “The flavor really was intense and easily became my favorite flavor… of Doritos.”

Given these glowing recommendations, I couldn’t help but wonder if Intense Pickle-flavored Doritos had ever been released in the United States. Unfortunately the answer is “I’m not sure”; however, I did dig up a page on Influenster for Doritos Intense Pickle chips that suggests it might have been, even if it was just in limited quantities for a brief time. The page has the item listed as discontinued, so obviously it’s not around in the U.S. market anymore — but a number of reviews from users based in the United States are visible on the page, most of which are dated September of 2017. Do with that what you will.

In any event, the good news is that if you don’t mind buying things on Amazon via third-party sellers, you can, in fact, get your hands on some Doritos Intense Pickle chips. The listing I found that started off this whole pickle-scented treasure hunt can be found here. If you’re wary of third-party sellers, though… well, you might be out of luck.

Unless, of course, you have some friends in Canada — or are even thinking about heading there yourself soon. If either of those things are true, access to this tasty-sounding snack might be closer than you think. According to the Canadian Doritos website, you can find Doritos products — and, by extension, Doritos Intense Pickle — in the Great White North at Walmart, Loblaws, and Grocery Gateway.

Good luck, friends. May the pickle deities smile upon you.