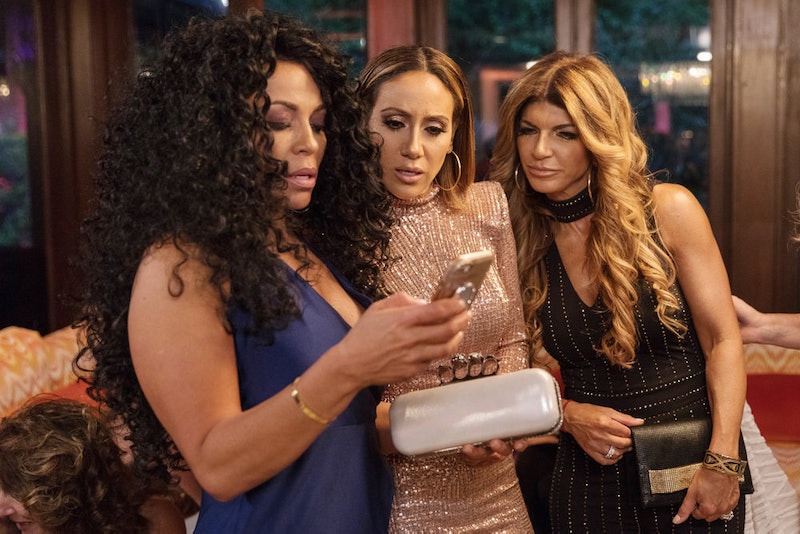 The one fight that has overtaken all others on Season 9 of Real Housewives Of New Jersey is that Teresa doesn't think that Joe spends enough time with their father, Giacinto. Following Teresa's husband being shipped off to prison and the passing of Joe and Teresa's mother, Giacinto now lives with Teresa, and it seems to be a good situation for both of them. She gets help with her four daughters, and Giacinto gets the company of his daughter and granddaughters. Teresa, though, is frustrated because she doesn't think that Joe spends enough time with his dad. He flits in and out, and Teresa is stuck doing the bulk of the care-taking.

Joe maintains that he works 16-hour days and does all he can. He has his own business, he argues, and he can only spend so much time with his family. To be fair, Teresa works and also manages to keep it all together, so it just goes to show the differences between what society expects of men and of women in terms of nurturing relationships. Joe and Teresa have had a handful of blowouts (and we're only a handful of episodes into the season), but if Joe's Instagram is any indication, he may have heard Teresa out in terms of spending time with his dad. That fight during Easter dinner may have made Joe reconsider.

Father's Day By The Pool

In June, Joe and Giacinto hung out poolside to celebrate Father's Day — that's three generations of Gorga men in one photo. I hope they put on SPF.

Melissa & Dad On The Boat

A summer day in Jersey can be made better by two things — good company and hours spent on the water. Beer would help, too, but in this case, Joe, his dad, and his wife seemed to have a good time.

Celebrating With His Granddaughter

Joe's daughter Antonia had a birthday in August, and she spent it with her Nonno and dad.

Giacinto turned the big 75 in September, and here's a snap of he and Joe toasting to the occasion.

Making Lemonade From Some Lemons

Giacinto was hospitalized for pneumonia in the fall of 2018, and Joe has been by his father's side while he's recovered.

Giacinto was feeling well enough on Thanksgiving for Joe to do his hair. When you look good, you feel good! It's a lot for this family to be thankful for.

While it is hard for Joe to admit when other people are right, maybe he and Teresa came to an understanding — spending time with their dad is the right thing to do, and they shouldn't miss these moments.