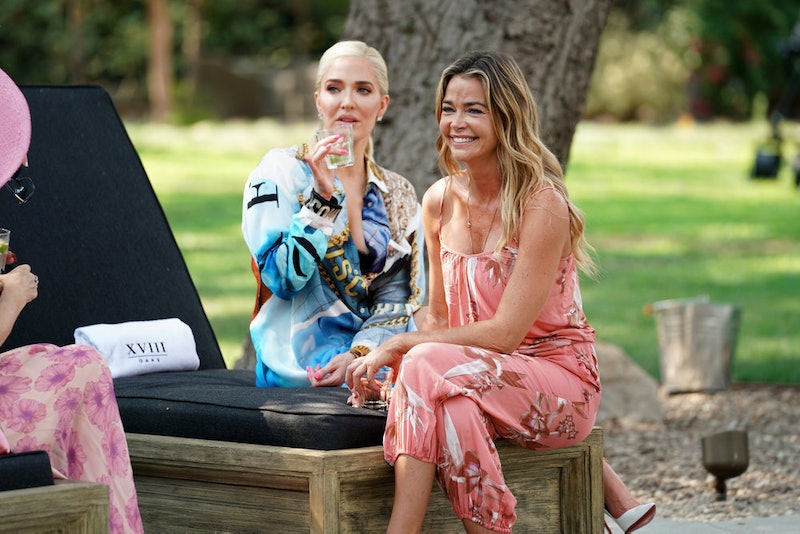 Every now and then, a Real Housewives franchise needs a kick in the pants. For Real Housewives Of Beverly Hills, that kick is Denise Richards. One would think that because she's a famous actress she would be high maintenance, but Denise is so the opposite — she is carefree and easygoing in a world where the rest of the women travel with their own glam squads. Denise is so easygoing, in fact, that she planned her wedding in mere days. And Denise's wedding on Real Housewives Of Beverly Hills shows that when you know you want to get married, you know, and you should just go for it.

Denise met Aaron Phypers before his divorce from Nicolette Sheridan was finalized, so when the papers were finally signed and filed, they decided that they wanted to get hitched as soon as possible. It was just as lowkey as their proposal, which viewers saw earlier this season and consisted of Aaron and Denise basically saying, "hey, let's get married." It was all so civilized!

According to an interview with People, Denise and Aaron actually planned their wedding in only 48 hours. “[Aaron] really wanted to marry on Sept. 8 because eight means infinity. We called [wedding planner] Mindy Weiss and she did it less than 48 hours and it was beautiful,” Denise said. We saw a bit of this on the show, but it definitely didn't even look hectic or stressful.

Pics Show That Everyone Had A Good Time

Denise even had her dress made in only 24 hours — Mark Zunino had his work cut out for him.

That was made in only a day, which is pretty unbelievable. Of her outfit, Denise told Extra, “I wore a traditional dress for my first wedding, so I wanted something different this time.” Turns out the whole thing was actually a convertible romper. “I didn’t take the tulle skirt off until I got on [Aaron's motorcycle]. I loved the skirt so much I wore it the entire evening.” So cute, and a great way to change things up after you've already worn the traditional thing once. A wedding is your day to shine.

Besides the dress and the location, not much else about Denise's wedding was released at the time. But don't worry — cameras were definitely rolling at Denise and Aaron's nuptials, because previews for Real Housewives Of Beverly Hills show a drama brewing between Teddi, Lisa Vanderpump, and Dorit at the reception and Erika told Bravo that she had "a meltdown" because it was so sweltering hot out. I'm sure all the yelling and sniping behind the scenes didn't help matters much.

Denise and Aaron's wedding sounds like an event full of love and happiness, so best of luck to them — with the rest of the Housewives at the wedding, they might have needed some of it.