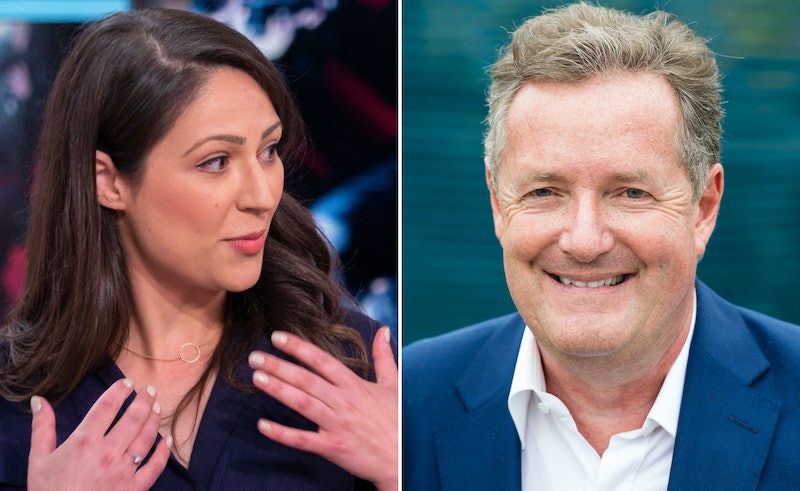 Another day, another instance of Piers Morgan displaying unbearable behaviour towards a woman. This time, the host of Good Morning Britain got into a very heated debate with Coronation Street star Nicola Thorp over sexism on the red carpet. But before I dive into the ins and outs of what happened, let me give you a little bit of background about Thorp.

Firstly, she is an accomplished actress, who appeared in Doctor Who and Doctors before joining Corrie as Nicola Rubinstein last year. Secondly, she's a feminist who has been very passionate about tackling sexism, especially after she was fired from her job at PriceWaterhouseCooper for refusing to wear high-heels, according to repor. She's even spoken in front of the Parliamentary Select Committee about the problems women face when it comes to sexism and female grooming.

Given the facts, surely Thorp has had enough experience to talk about sexism on the red carpet? Right? Apparently not in Morgan's mind. When he interviewed the actress about these issues, the presenter made his feelings crystal clear as he repeatedly dismissed her lived experiences during on Tuesday's episode of Good Morning Britain.

It all started when Thorp was invited on the show alongside former News Of The World editor, Neil Wallis. During the interview, she decided to bring up the sexist behaviour she personally experienced at this year's British Soap Awards. However, the topic of conversation quickly moved on to sexism in the entertainment industry.

Thorp said that "women are constantly being told they're looking too sexy, too revealing. The photographs of women and the photographs of men on red carpets are reported about much differently." She then pointed out that despite winning the Best British Newcomer accolade at the awards, many headlines focused on her "flaunting cleavage" as opposed to her actual win.

"If you just look at the language that is used to describe women…" Thorp began to explain, before she was cut off by Morgan, who dismissed the existence of sexism on the red carpet and blamed the situations Thorp describes on how she dresses. Wallis seconded this by adding: "Well don't do it then. You're doing it to promote yourself."

Erm... talk about disrespectful. While both Wallis and Morgan are of course entitled to their opinions, my concern here is that they both perpetuated, on national TV, the extremely damaging and negative facet of rape culture that women who dress a certain way are "asking for it." I mean, seriously? Is a woman's outfit really a green light for unwanted and sometimes aggressive attention? If something bad happens to a woman, does her right to complain depend on her clothes? Bustle contacted Morgan's rep for comment but am yet to hear back.

During the interview, Morgan's co-host Susanna Reid was barely able to interject when she said that "one of the things that women on the red carpet feel, is that whatever they wear they're going to be over analysed." But once again, Morgan and Wallis chose to blame women in the entertainment industry for the sexism they experience rather than the misogyny and the men who preserve it through their actions towards women. The pair shouted in unison at Thorp: "Don't go on the red carpet then." Nice.

Throughout the debate, Morgan maintained that men and women experienced an equal amount of critique on their appearances from the media, saying: "If a man turns up on a red carpet looking ridiculous, fatter than normal or his hair is all gone, he'll get exactly the same treatment. I've had it myself. I don't buy into it that it's only women."

However, Thorp, who was visibly angered by having to counter incessant distortions of reality, kept trying to reassert her point that she wanted to focus on how women are scrutinised. "I'm attacking the sexism within the media," she said. But Morgan wasn't buying it. In fact, he actually then went on to blame red carpet sexism on women in the media.

This spat with Thorp displayed Morgan's token dismissal of personal experience and saw him instead of accepting, or even listening to, her familiarity with the topic, just interrupted the actress to talk over her. Of course, Thorp shouldn't have been put in this situation, but she handled it incredibly well.

More like this
Liz Truss Is Being Compared To A Controversial Emma Thompson Character
By Sophie McEvoy
Lauren Lyle Is Keeping The Contents Of Karen Pirie’s Bum Bag A Mystery
By El Hunt
At 28, Melanie C Was Falling In Love & Reclaiming Her Confidence
By Olivia-Anne Cleary
Molly-Mae & Tommy Fury Shared The Cutest Gender Reveal Video
By Sophie McEvoy and Sam Ramsden
Get The Very Best Of Bustle/UK