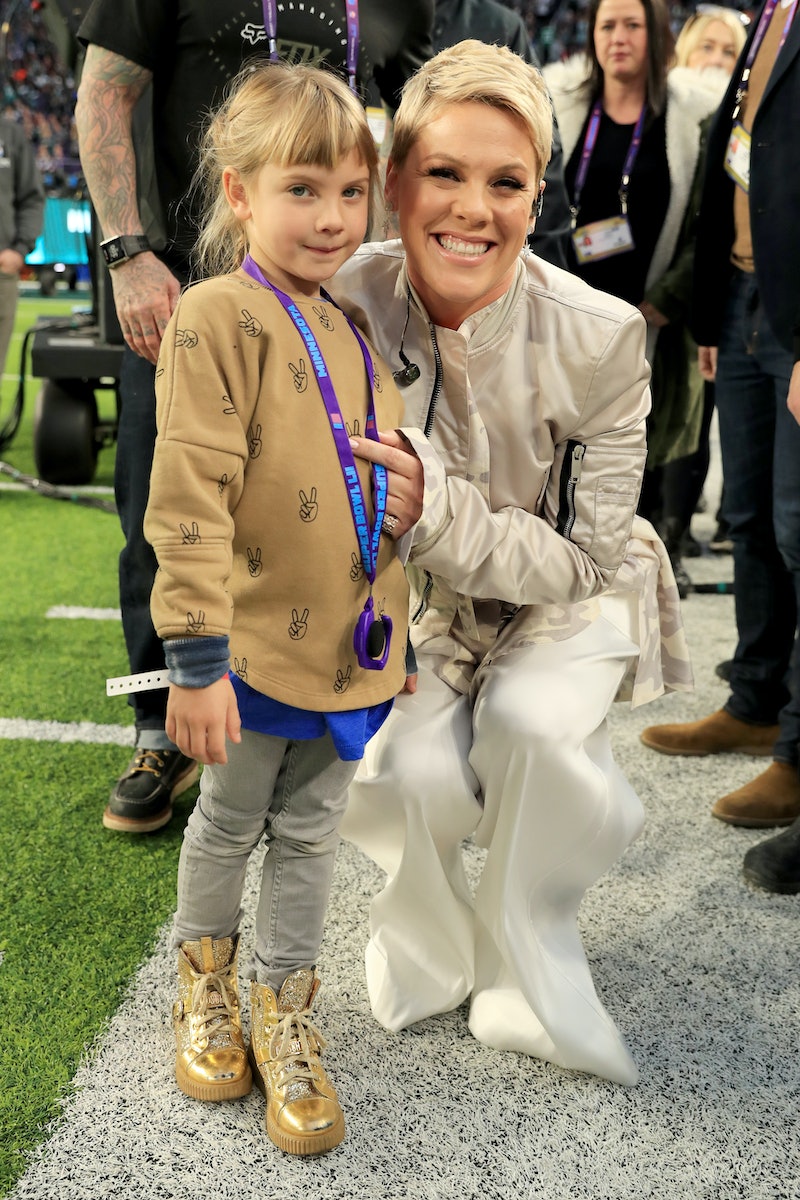 Mommy shaming is not cool, and even celebrities aren't immune to its impact. The latest to fall prey to the online mommy patrol is Jessica Simpson, who dyed her daughter's hair. After harsh online comments about her parenting started popping up, Simpson's got some serious support because Pink dyed her daughter's hair blue to support Simpson. Who doesn't love ladies standing up for ladies?

If you missed the whole kerfuffle with Jessica Simpson and her daughter, the mom shaming saga began on July 31 when the singer and brand owner took to her Instagram account to showcase a photo of her daughter Max's new hair. Simpson's daughter has an ombre style of purple and green along the bottom of her naturally blonde hair, and according to the celebrity, Max was inspired by Disney's The Descendants. If you've seen the films, the lead character Mal has bright purple hair for much of the films.

While Simpson posted the photo clearly not intending to get mom shamed, people came at her for allowing her seven-year-old to color her hair. Comments ranged from Max's blonde hair being prettier to Simpson allowing her daughter to grow up to fast. Now, the singer has a major supporter in fellow singer Pink and her daughter, Willow.

On Thursday evening, Pink took to her Instagram account to publicly defend Simpson and her daughter's choice to dye her hair by well, dying her own daughter's, Willow's, hair blue. The photo is split in two parts. On one side, fans can see Pink coloring her daughters hair at home while Willow reads. On the side, you can see the result of Willow's new blue 'do.

Alongside the photos, Pink wrote, "I heard people were bummed on Jessica Simpson for letting her seven year old get her hair colored. So we thought we’d share what we did yesterday." She included hashtags like "#bluehairdontcare," "getyourownkids," and "#parentpoliceareactuallyjustlonelysadpeople."

While Maxwell's ombre look marks her first time getting her hair color, it's certainly not Willow's first go with dye. According to Allure, Willow has had purple in the past as well. Plus, Pink's daughter also seems to be a budding makeup artist. She even recorded a full makeup tutorial that her mom posted online.

As for Simpson, she hasn't remarked on the backlash, but the mommy shaming she experience is certainly not rare for celebrities. In December of last year, Kim Kardashian West was mom shamed for allowing daughter North West to wear red lipstick to a Christmas party.

Kardashian West's sister Khloe Kardashian has also been mom shamed. A few months after daughter True's birth, Kardashian attended a charity event benefitting City of Hope which helps to benefit those with cancer. Despite being at an event for charity, she was mom shamed for leaving her daughter. Kardashian, however, fought back arguing why she should feel bad letting True's father, Tristan Thompson, watch her seeming to point to a double standard between mothers and fathers.

Unfortunately, mom shaming doesn't seem like it's going to go away, especially in the age of social media. However, like with Pink and Jessica Simpson, it's nice to see mother supporting other mothers through the criticism.