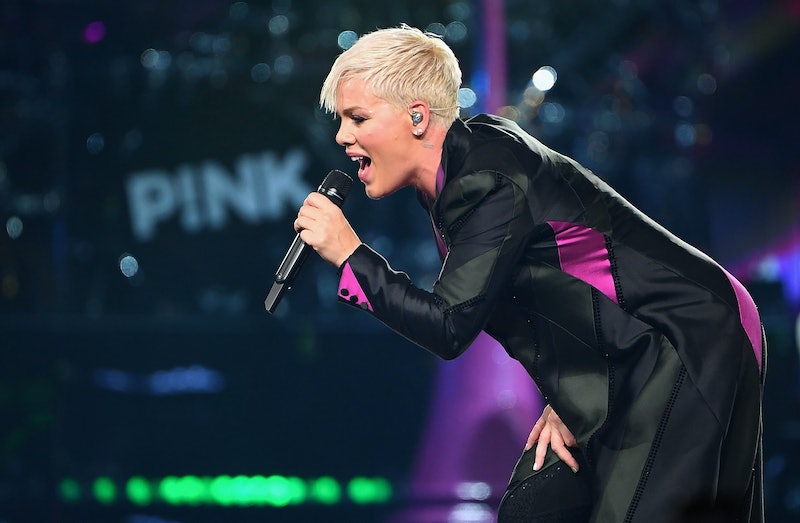 Pink is so not here for a misleading report about a postponed tour date. On Friday, Pink defended her decision to postpone a Sydney concert on Instagram after an Australian publication criticized her. Her post appears to be in direct response to the headline and photos that were featured in Australia's tabloid The Daily Telegraph. The paper shared an image of Pink lying on the beach as her daughter looks down on her with the headline, "Pink's Sydney concert cancelled as she chills in Byron Bay." Pink took offense at the implication that she had canceled shows to simply relax and her strong stance on self-care is exactly the type of response you'd expect and want from the "What About Us" singer.

Pink is currently in Australia for her Beautiful Trauma tour. And on Aug. 1, she announced on Twitter that she had to postpone Friday's Sydney concert due to illness, with The Sydney Morning Herald reporting she has a chest infection. According to her tour page, Friday's show was the first of nine scheduled performances in the Australian city. "I don't need to clear this up, but out of respect for my fans I will attempt it," Pink stated in the caption of her Instagram post that featured The Daily Telegraph paparazzi image of her on the beach. She then explained how this stop in the beach town of Byron Bay (situated hours north of Sydney) had been planned before she postponed the tour date and that she has battled illness already on her Australian tour. Pink wrote:

What these parasite paparazzi don't show you, is two doctor visits in Byron on two consecutive days, antibiotics, steroids, Vick's, nose spray, throat spray, more steroids, NyQuil, a screaming baby in the middle of the night, every night, while mama gives him warm baths and tells her daughter everything is fine.

As the Beautiful Issue of People highlighted this year, Pink has 7-year-old daughter Willow and 1-year-old son Jameson with her husband, Carey Hart. So, along with her sickness, being an international recording artist, and her demanding tour schedule, she also needs to be a mother to her two children. "I mother with everything I have whilst handling all the rest," Pink wrote in her post. "The snark in this is unbelievable and makes me long for a nicer world. I'm doing the absolute best I can, and you can believe it or not." She also criticized the publication for hovering near her family while they were at the beach and making her daughter uncomfortable.

The comments on her post show that Pink's fans absolutely support her. Fellow performer and parent Justin Timberlake also chimed in. "As an artist who has had the fortune of sharing the stage twice on tour with this incomparable BADASS ... I'm here to tell you that you won't find a harder working, more authentically talented, and more thankful for her place on that stage and her fans than this woman," Timberlake wrote in the comments. He also explained how he can relate since he's currently on tour with an injury and a sinus infection as he tries to be the dad he "[wants] to be" to his 3-year-old son, Silas. "I don't know how Moms/Artists like you exist," he wrote.

Beyond her powerhouse singing voice, Pink is known for using acrobatics to create unique concerts. And she explained that people who had tickets for her Friday Sydney show won't miss out since she will reschedule the concert for a later date. She also plans to go on with the rest of the tour dates as planned starting on Saturday even if she isn't completely healthy.

"You can think whatever you want, it's your right, but I have never taken advantage of any one in my entire life," the outspoken artist wrote. "I have never f*cked off while disrespecting hard working people who spend money to come see me play. I have never phoned in a single tour, I have an impeccable record for not cancelling."

Although the tone of the publication's headline clearly made Pink angry, she wrapped up her post with an apology to the people who were impacted by the postponement. "As I said, I'm sorry to the real fans who this situation has affected," she wrote, proving how much she respects and appreciates her fan base.

Yes, Pink is a superstar, but the artist is also a human, and she needs to take care of her health and family, too. No one should attack her for that.