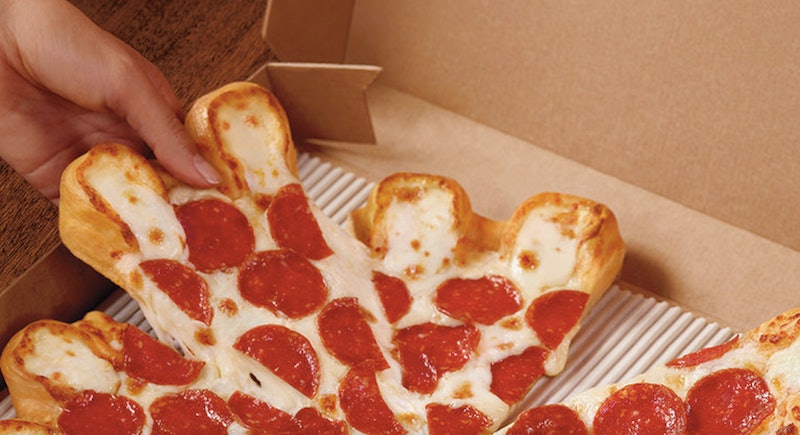 If love is a drug, then so is cheese. It is quite a statement, but there is some truth behind it if you think about brain chemistry and pleasure sensors. Perhaps this knowledge might influence your last-minute Valentine's Day plans. Anyone who thinks cheese can't be festive clearly hasn't had the most cheese-filled pizza to ever occupy a space on this rock hurdling through the universe where we reside. Luckily, if you missed it before, you can get a taste of this marvel once again: Pizza Hut's Ultimate Cheesy Crust Pizza is back.

Released in conjunction with the chain's special Valentine's Day offerings, the Ultimate Cheesy Crust Pizza comes with a whopping 16 cheese pull opportunities, which are, per Pizza Hut, filled with mozzarella, provolone, white cheddar, asiago and fontina cheeses. If you didn't count, that is FIVE different, distinct cheeses stuffed into pockets of dough in place of the regular crust. Plus, as an added bonus, the new re-invented crust puffs filled with cheese vaguely resemble a heart. Can you see where this is going? Who needs a paper Valentine or a heart-shaped box of chocolates when you could have heart-shaped pizza slices. Really, there is no competition.

Unless, that is, you want an entire heart-shaped pizza. Pizza Hut is doing that, too.

In a press release, Marianne Radley, the chief brand officer at Pizza Hut, explained, "If there is one thing we're absolutely certain of, it's how much our customers love cheese. Bringing back the beloved Ultimate Cheesy Crust AND Heart-Shaped Pizzas in advance of Valentine's Day allows us to deliver the ultimate indulgence for cheese and pizza lovers alike."

To prepare for the momentous release, Pizza Hut surveyed 1,000 Americans about their cheese habits. The results were somewhat unexpected, and offer profound insight into the country's devotion to dairy. An astounding 96 percent of Americans surveyed by Pizza Hut identify themselves as cheese-lovers. Almost half, 41 percent of Americans, report abstaining from eating cheese for one month would be more difficult that abstaining from alcohol or sex. Finally, almost one quarter of Americans say they would not date someone who does not share a love of cheese. Picky or pragmatic? Only you can judge.

Pizza Hut makes ordering pizza easy and convenient with more than 18,000 storefronts worldwide. In addition to ordering over the phone, customers can order from an app on on phones, on the website, and mobile site. There is also a loyalty program, Hut Rewards, that offers points for every dollar spent on food any way you order.

Oh, and remember that thing about cheese love having a scientific basis? It has to do with the protein called casein. Researchers from the University of Michigan were the ones to liken cheese to a drug. Feed your addiction sooner rather than later, as Pizza Hut's Valentine's Day bundle and the Ultimate Cheesy Crust Pizza are only available for a limited time.