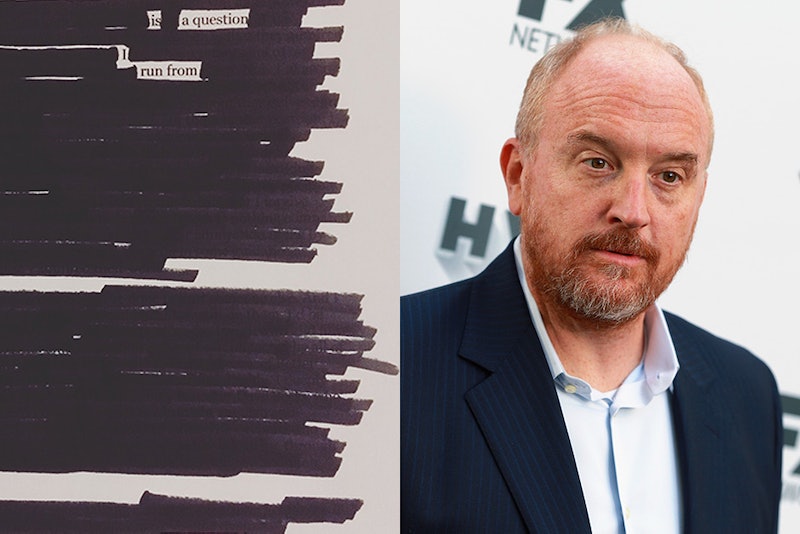 In the wake of the deluge of sexual misconduct allegations that began flooding the news in early October and have continued to arrive seemingly daily ever since, poet Isobel O’Hare has begun creating erasure poems out of the statements those accused have released. Her erasure poem of Louis C.K.’s statement was one of the first; she posted it to Twitter on the morning of Nov. 12, with others quickly following both on Twitter and on her Instagram account. In the few days since, they’ve gone viral — which, I would argue, is unsurprising: poignant and powerful, they’re proving to be an important part of the conversation that is finally (finally) being carried out in the public sphere.

O’Hare holds a degree in writing from Trinity College in Washington, D.C. and an MFA in poetry from the Vermont College of Fine Arts. She has published several chapbooks, including the forthcoming Heartbreak Machinery; additionally, her poetry has appeared in the anthology A Shadow Map. She’s also an editor and essayist; she co-edits a journal and small press called Dream Pop; and she reads fiction submissions for online literary magazine The Rumpus. O’Hare has been working with the format of erasure poetry — which takes existing texts and blacks out large swathes of words, creating new works out of the pieces that remain — for several years. “I was originally drawn to the medium thanks to the work of Mary Ruefle and Jen Bervin, two poets who served as faculty members at Vermont College of Fine Arts, where I received my MFA,” she tells Bustle in an email. “I started out erasing the work of Robert Duncan, but that project was a reverent one where I felt like I was having a conversation with a long-dead poet whose work I admired."

And, as artists tend to do, she has reacted through her work to the sexual misconduct allegations and the ensuing, wide-scale conversation about both those allegations specifically and rape culture more generally. She tells Bustle that she didn’t originally have a goal for what turned into an ongoing project “other than my own catharsis” — but as she’s posted each one to social media, tagging them all with the #metoo hashtag, something started to emerge. “Something propelled me to erase these statements, and the purpose of the work didn't become clear to me until I'd already done a few,” she says. “I felt like I was revealing a hidden truth in their words as well as, in some small way, reversing the erasure they had enacted against their [alleged] victims.”

The erasure poem O’Hare created out of Louis C.K.’s statement is particularly arresting; in his statement released on Nov. 10 responding to allegations of sexual misconduct, the comedian said, "These stories are true. At the time, I said to myself that what I did was okay because I never showed a woman my dick without asking first, which is also true. But what I learned later in life, too late, is that when you have power over another person, asking them to look at your dick isn’t a question. It’s a predicament for them. The power I had over these women is that they admired me. And I wielded that power irresponsibly. I have been remorseful of my actions. And I've tried to learn from them. And run from them."

Here are O'Hare's "edits" to the full statement, below:

In a report published by The New York Times on Nov. 9, multiple women alleged that C.K. had either taken out his penis and masturbated in front of them, or asked them if he could do so. Here’s C.K's. statement in response to the allegations, which was provided to Bustle through his rep, in full:

These stories are true. At the time, I said to myself that what I did was okay because I never showed a woman my dick without asking first, which is also true. But what I learned later in life, too late, is that when you have power over another person, asking them to look at your dick isn’t a question. It’s a predicament for them. The power I had over these women is that they admired me. And I wielded that power irresponsibly.

I have been remorseful of my actions. And I've tried to learn from them. And run from them. Now I’m aware of the extent of the impact of my actions. I learned yesterday the extent to which I left these women who admired me feeling badly about themselves and cautious around other men who would never have put them in that position. I also took advantage of the fact that I was widely admired in my and their community, which disabled them from sharing their story and brought hardship to them when they tried because people who look up to me didn't want to hear it. I didn't think that I was doing any of that because my position allowed me not to think about it.

There is nothing about this that I forgive myself for. And I have to reconcile it with who I am. Which is nothing compared to the task I left them with. I wish I had reacted to their admiration of me by being a good example to them as a man and given them some guidance as a comedian, including because I admired their work.

The hardest regret to live with is what you've done to hurt someone else. And I can hardly wrap my head around the scope of hurt I brought on them. I’d be remiss to exclude the hurt that I’ve brought on people who I work with and have worked with who’s professional and personal lives have been impacted by all of this, including projects currently in production: the cast and crew of Better Things, Baskets, The Cops, One Mississippi, and I Love You Daddy. I deeply regret that this has brought negative attention to my manager Dave Becky who only tried to mediate a situation that I caused. I’ve brought anguish and hardship to the people at FX who have given me so much, The Orchard who took a chance on my movie, and every other entity that has bet on me through the years. I’ve brought pain to my family, my friends, my children and their mother.

As many have pointed out, this statement is still problematic. One, nowhere in it does he explicitly apologize to the women he allegedly harassed; and two, he has spent years denying the “open secret” of his alleged behavior as nothing but rumors. (As recently as September of 2017, he said to The New York Times, “They’re rumors, that’s all that is.")

With all that in mind, take another look at the poem O’Hare created out of it:

It’s stunning in its simplicity — and yet, it speaks volumes.

With all writing, really, but with poetry in particular, the form the work takes matters as much as the content; indeed, much of the time, I would argue that the form is part of the content. It’s not even just a matter of needing to consider both what you say and how you say it, because on top of what the words themselves say, the form they take often says something, too — something that may not be present in the words alone.

That’s definitely the case with erasure poetry, and especially with this particular set of erasure poems. Says O’Hare to Bustle, “I've always enjoyed found poetry, the process of finding something hidden inside a text, like a treasure hunt.” — and indeed, in the case of her “edit” of C.K.’s text, it appears to read as a commentary on the years he spent brushing off the stories of his alleged behavior as “rumors.” (Or at least, that’s how it reads to me; that’s the beauty of poetry: It can be read in different ways by different people with different points of view.)

But the work is not always easy — either to create, or to read. It forces us to confront issues, thoughts, and ideas that, too often, are considered simpler just to let lie. We can no longer afford to do so, however. We have to face rape culture head on. And I hope — hope — that we’re finally starting to do just that.