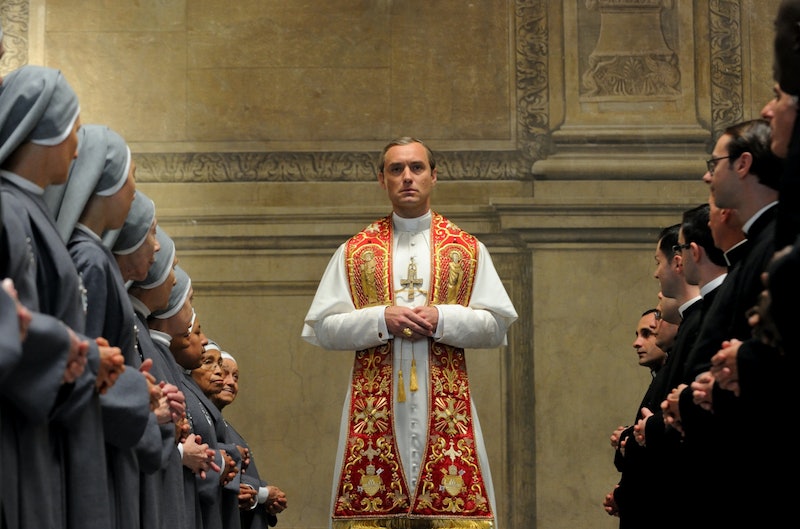 After its premiere, The Young Pope leaves a lot of questions for its remaining episodes, mostly focusing on the secrets from Pope Pius' past. The other cardinals, led by Voiello, seem to laugh at the idea of Lenny Belardo becoming the highest Catholic official in the world. We don't know the specifics yet, but there have been hints, and it's possible that Pope Pius doesn't actually believe in God — because that half-hearted "joke" denial didn't exactly seem true. We don't yet know what it is, but something in Lenny's past clearly took him from a young believer to the jaded, power-obsessed cynic that he is today.

This is a series that begins with Jude Law's character symbolically climbing out of a pile of babies only to be greeted with an iPhone alarm, kicking off the mix of ancient tradition and modernism that continues throughout the premiere episode. At times, this dichotomy does verge on being completely silly (like with the baby dream sequence), but writer and director Paolo Sorrentino's filmmaking choices suggest that viewers should feel the same way about this portrayal of the Vatican. There are many slow-motion, reverent shots of characters beholding Law's face, along with moments of incorporating historic artifacts and architecture with the use of modern technology like smartphones (Voiello texting his way through confession is a particularly silly example).

The Young Pope doesn't suggest that over time, Pius will go mad with power. Instead, he emerges instantly desperate for that power, believing that he has literal dominion over things like weather, conducting an audience of devout Italians like they're attendants at a particularly ornate Beyoncé concert. This will not be the typical "heavy is the head that wears the crown" story. Not only does Pope Pius seem completely at ease with power, but the series introduces viewers not as "Lenny," the humble archbishop of New York City, but as Pope Pius XIII on his first day in the role. Everything before that is seen as flashbacks that will hopefully show what caused him to become so power-hungry.

Even following the endless Twitter hype, the series premiere of The Young Pope actually manages to deliver a few genuinely jaw-dropping moments, and I'm not just talking about the combined shock and laughter after Law dryly says, "all I have in the morning is a Cherry Coke Zero." After just an hour with Pope Pius, I'm as curious about his backstory as the cardinals that surround and constantly question him.