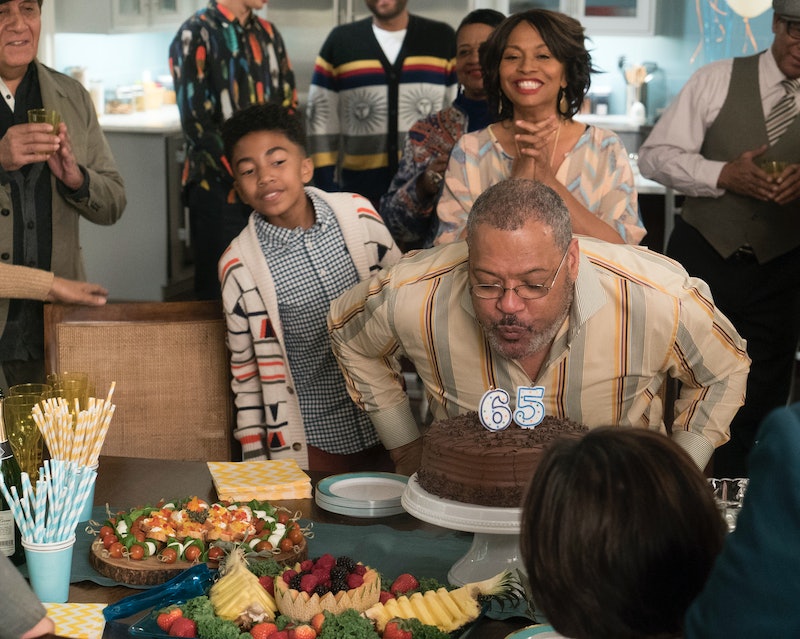 The Johnson family hits another milestone in the March 20 episode. Pops turns 65 on black-ish and celebrates his birthday by marveling at how he beat the odds. He's made so many dangerous choices in his life — including busting out a pair of nunchucks after a dice game went sideways — but somehow, he's made it. Dre's dad has always been a larger-than-life character, and at this point, he's pretty happy with how it all turned out. He even starts calling himself the "world's oldest black man."

But between recollections of Pops' best moments (and a few of Ruby's, of course, including another look at her explosive relationship with her ex-husband's boat), black-ish poses a question that may not have a concrete answer: is it possible to ignore the problematic actions and opinions of your elders, because they lived through a different era — in Pops' case, a much more difficult one? The exploits Pops has gone through are ridiculous, but they do relate to some pretty serious trauma Dre went through as a kid, like seeing his parents split up, losing Christmas presents because of his father's gambling, and living in a low-income neighborhood that previous episodes have suggested was close-knit, but not always safe. And yet, Dre loves his dad, as does the rest of his family. Dre offers his forgiveness on this big birthday — for not just the difficult moments growing up, but for the continued ways in which the older and younger generations clash (for examples, see most episodes of black-ish Season 1).

Certainly, age shouldn't be a reason to excuse true bigotry from anyone, but context and experience certainly matter. Data in a recent piece in The New York Times shows that it's more difficult for black men are less likely to be more economically successful than their parents than than any other demographic in the United States. Dre, then, represents one of very small group, and he credits his father's presence in his life with helping him achieve that American dream. And Dre also mentions that the simple presence of a father in his household distinguished him from a significant number of his peers, suggesting that when it comes to Pops, part of the reason Dre can forgive his flaws and admire him for making it to 65 is that he managed to help his son and his grandchildren maintain a comfortable existence — defying every statistical prediction.

In fact, Junior’s shock at Pops’ less than savory past behavior seems to be a call for younger generations to not forget the sacrifices and the challenges that those before them went through. Granted, Pops is a grifter who had several passports and an arrest record, but a lot has changed materially for the Johnsons over the last two generations. And as the episode points out, they’re lucky to have Pops still with them as the family moves up in the world. He's always been a part of Dre's life, and, at times, his primary caregiver.

And while Pops' hustles certainly don't adhere to contemporary standards of respectability, they were, in their time, his own way of showing his love — and of showing how awesome he's always been. (Seriously, that is one foxy '70s ensemble, and the sword isn't so bad either.) Even though Pops can be a big of a problematic senior — one who's willing to give a minor alcohol and whose best friend can pick any lock — he's got a huge heart. So it's no wonder he's a beloved member of the family and a fan-favorite character.