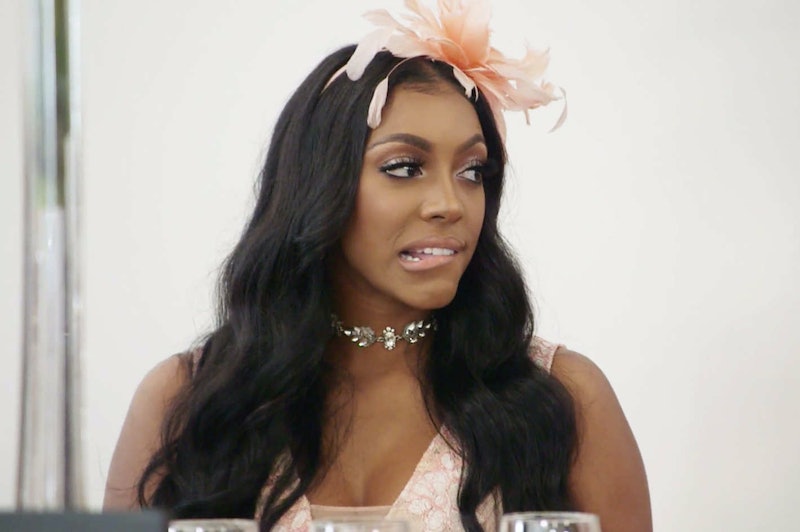 In the Nov. 12 episode of The Real Housewives Of Atlanta, Porsha decided to skip her friend's wedding, and it had her fellow Housewives and Twitter judging her choice. Ever since last year's shenanigans with former housewife Phaedra, Porsha has been isolated from the rest of the peaches. She had been focusing on her podcast and eating vegan to avoid any and all further drama, but in this episode, she found herself smack in the middle of it. Her childhood best friend Shamea is getting married, but unfortunately, Porsha won't be in attendance. And this leads to plenty of hurt feelings and snippy comments. There are probably good reasons to skip your friend's wedding, but RHOA fans don't think Porsha's is one of them.

In the episode, affectionately titled "Say Yes to Distress," Kandi met up with recurring cast member Shamea in an African dress shop to get some items for the various wedding events. Kandi asked Shamea if Porsha is coming to the wedding and is told that Porsha apparently can’t afford the tickets. While airline tickets to Kenya certainly aren't cheap, Porsha is hardly struggling. Twitter seemed to feel like her reason for not attending was actually an excuse.

Later the gals headed to Shamea's bridal shower, where Kandi and Porsha share a few icy moments together. After a few party games Shamea decided to address the elephant in the room commenting that it was a little odd for Porsha to come to her dowry ceremony — one of the steps of the traditional Kikuyu wedding process. Shamea also said that they haven’t really spent time together as friends, so it is a little random that Porsha managed to show up for such an important ceremony. Porsha then proceeded to set the record straight, telling Shamea and Shereé, who was listening nearby, that she probably still won't be attending the wedding. But not just for the reasons Shamea originally thought.

Porsha claimed that she has a condition where she can’t sit with her legs down for too long and for that reason, she can't fly in economy. Though the CDC warns about the risk of blood clots on long flights and Porsha could have been referring to being at a higher risk of that, an annoyed Shamea wasn't buying this excuse. And this is when all hell broke loose.

Porsha and Shamea went back and forth, asking each other to understand their position, but Porsha finally gave up. “I’m not trying to understand it anymore," she said. And she declared that she's going to support and love Shamea from afar. While it was a conversation that needed to be had, this special ceremony definitely wasn't the time or place. The whole ordeal spoiled what should have been a totally happy moment between family and friends. But alas this is the RHOA, so of course no events will ever happen without a few bumps along the way.

Unfortunately, this most recent tiff means Porsha will remain on everyone's bad side with no one to turn to except her sister and cousin, who've been appearing more and more this season. But fans don't seem to be feeling even the slightest drop of sympathy for Porsha. In fact many quickly took to Twitter to share their thoughts on her skipping Shamea's wedding for what they consider to be a heavy dose of "snobitis." (And Bravo's Daily Dish blog appears to confirm that Porsha did not change her mind and attend.)

Porsha can't win for losing. Weddings can be one of the happiest times in a person's life when surrounded by family and friends, and for many it can be unforgivable offense when your loved ones miss it. It seems that Shamea is one of these people. And if Porsha wants to win back her best friend her mission is clear: she has to prove that Shamea means more to her the money she'd save on a plane ticket.