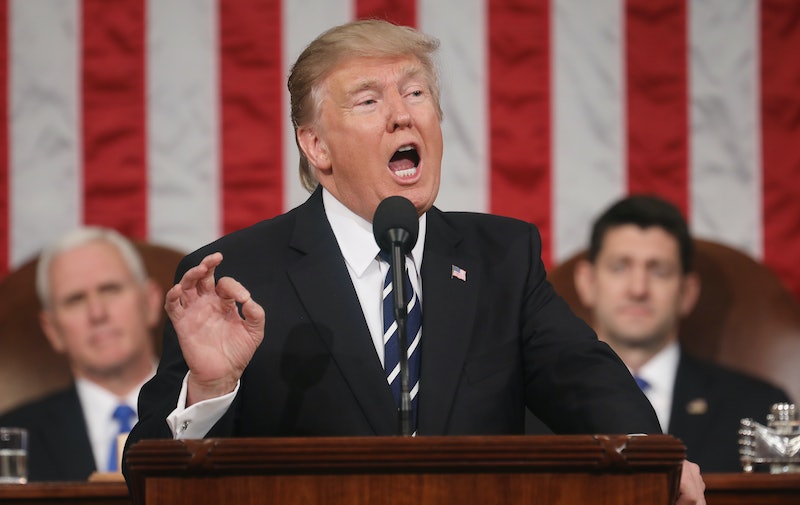 Wednesday served as a necessary reminder that we need to continue talking about how our society values women. Not only was March 8 the "Day Without A Woman" strike and International Women’s Day, it also marked a little more than five months since the release of the tape featuring Donald Trump talking about "[grabbing women] by the p*ssy." An anonymous artist in New York made sure that was not soon forgotten by plastering posters of the transcript of Trump’s Access Hollywood tape across the East Village.

The posters feature Trump’s full name, image, and his verbatim explicit language regarding nonconsensual acts with women. If you live in the East Village, you can find the poster installation lining public walls, doors, and essentially any flat surface at eye-level. Each poster is signed “The President of the United States of America.”

Despite efforts to excuse the language in the Access Hollywood recording as “locker room banter” and continuing to insist that "nobody has more respect for women" than he does, Trump and his administration have done little to truly separate themselves from the attitude towards women the American public heard expressed on that bus.

The Access Hollywood recording may be from 2005, but Trump’s sexism did not start and end there. You don’t have to do much digging to find Trump publicly showing disregard for women before, during, and after the election cycle. This poster installation serves as a visual reminder that our current president has a past and present riddled with misogyny.

Trump’s presidency is just one example of the many ways our society is able to overlook sexual assault. Hearing the comments on that tape and seeing how Trump chose to respond to it through deflection and the age-old “boys will be boys” sentiment matters in the context of how we treat women as a culture. To many, electing Trump as president sent a message about how the country prioritizes sexism and women as a whole.

All of this, of course, stands in stark contrast to Trump's tweet yesterday ostensibly in honor of International Women's Day:

The artist who put up the signs has not stepped forward, but the posters speak for themselves.

The Women's Strike sent a message about how women deserve and expect to be valued. As the Women's March website states, "A Day Without a Woman" worked to call attention to the socio-economic contributions women make as well as the work-related injustices women face, including sexual harassment.

For the women who went on strike yesterday, the millions who marched in January, and the one in five women who have reported being sexual assaulted, when it comes to respecting women and denouncing sexism, actions speak louder than a few apologetic tweets.