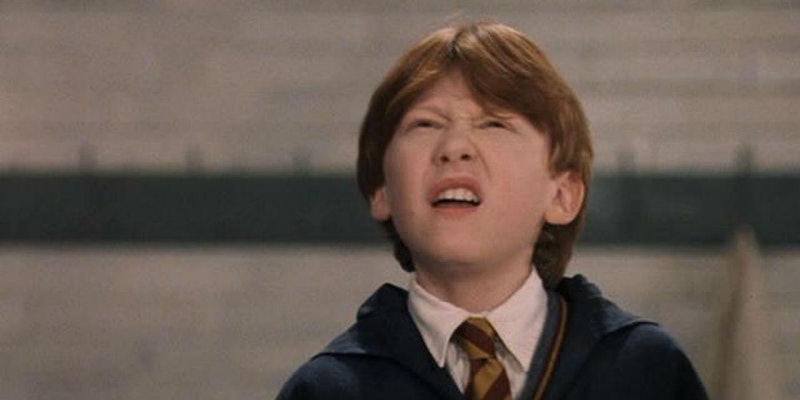 If there was a ever a "save it for the group chat" moment, this is it: On Friday, Pottermore decided to bestow upon its Twitter followers a fun fact about the historical bathroom practices of wizards. It got weird, fast.

"Hogwarts didn't always have bathrooms," the tweet read. "Before adopting Muggle plumbing methods in the eighteenth century, witches and wizards simply relieved themselves wherever they stood, and vanished the evidence."

I am troubled, and I have questions. First and most importantly: Why did Pottermore tweet this? Second: As Jenny Han pointed out, did wizards not wipe after relieving themselves? Third: The law of conversation of mass — or at least, my feeble understanding of it — maintains that mass is neither created nor destroyed during chemical reactions, so what happened to the poop?

If you're a Harry Potter fan, chances are you have at least poked around on Pottermore, a site fully dedicated to the Harry Potter fandom with interactive games, a "Sorting Hat," and a quiz that pairs you with your Patronus. In the years since the books and movies ended, Rowling and Pottermore have kept the spirit of Harry Potter alive through the Fantastic Beasts movie series, the play Harry Potter and the Cursed Child, and a number of novelty books. Not to mention a whole lot of Harry Potter merchandise.

More than a few of the initiatives launched by Rowling and Pottermore in the years since 2011, when Harry Potter and the Deathly Hallows — Part 2, was released in theaters, have come under fire, namely the Ilvermorny School of Witchcraft and Wizardry, the North American version of Hogwarts which was widely criticized for its inaccurate portrayal of indigenous American cultures, and the Fantastic Beasts film franchise, which has been mired in controversy since the casting of Johnny Depp, who was accused of domestic violence by his ex-wife, Amber Heard. Sadly, that was just the first of many controversies for the movie series.

In Feburary 2018, Bustle writer Kerri Jarema spoke with Potterheads who are disappointed with the legacy of the franchise and unsure of how to move forward as fans. She wrote:

"But the question still remains: Is a string of poorly handled controversies enough to negatively shift the legacy of Harry Potter, and its author, forever? Of course, the impact that the series has had cannot be overstated, but Rowling herself has long been held up as an icon and an inspiration for her inventive writing, her many charitable contributions, and her own cinema-worthy rags-to-riches life story. But what is a legacy, how long does it take to build one up or tear it down, and who gets to decide any of the above? These are the questions that Potterheads are just now beginning to grapple with."

Is tweeting a weird plumbing fact on par with making creative decisions that undermine the humanity of many of J.K. Rowling's fans? Absolutely not. I get it. It's playful and genuinely funny. But so many of the things that have been meant as entertainment have actually been harmful, and I am using this weird tweet as my moment to talk about it. It may be time for Pottermore — and Rowling — to think more seriously about what Harry Potter looks like in the world moving forward. Hopefully that involves a lot more consideration, understanding, and empathy.