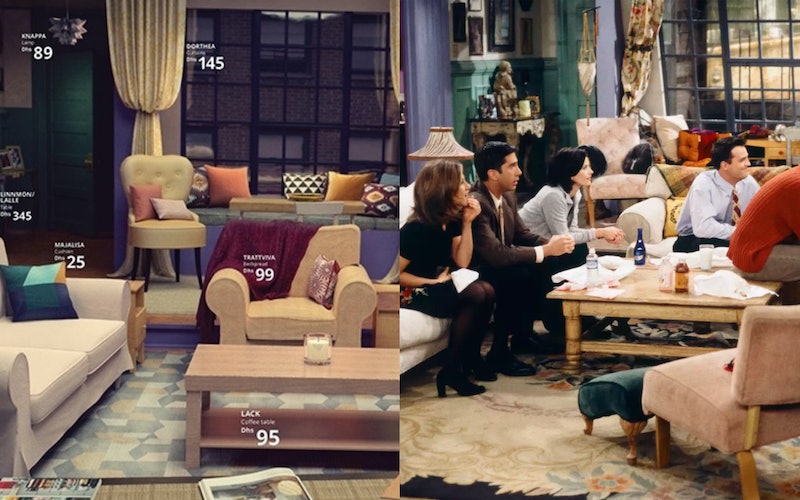 If you’ve ever wished you could live in the apartment of your favorite TV character, good news: If your favorite TV character is Monica Gellar, you can. IKEA recreated Monica’s living room from Friends using only items available in their own (admittedly huge) catalogue. And, uh, folks? It’s what I might go so far as to call “apartment goals.” Astonishingly accurate, the space looks just like the one Monica (and pretty much all of the other Friends) called home for all 10 seasons of the show — and each of the items is imminently affordable. Seriously: The most expensive item is the couch, which still clocks in at under $400. That’s a steal for a brand-new couch — and, I mean, let’s face it: The riotous sense of joy you’d get from actually living in Monica’s apartment is priceless.

IKEA’s take on the Friends living room is part of a larger campaign created for IKEA United Arab Emirates called the “IKEA Real Life Series.” The result of a partnership between IKEA and Publicis Spain, the Spanish arm of the massive, worldwide communications firm Publicis Groupe, the IKEA Real Life Series recreates three iconic living rooms from some of television’s most notable pop culture properties. Monica Gellar’s living room is described as the “Room For Mates”; the “Room For Families” brings the Simpson family’s brightly colored home in Springfield to life; and the “Room For Everyone” plunges us into the season one living room of the Byers family of Stranger Things fame.

So how did they do it? As Publicis/PublicisEmil/Wyswig/Nurun COO Eduward Marques noted to AdAge, “The curious thing is that, actually, you can really find anything at IKEA.” In the case of the three pop culture-themed rooms, said Marques, there turned out to be “more than three options at IKEA” available that would work for “every object we needed to replace.” In search of a brightly colored rug with a distinctive ring-like pattern? Try this FORNYAD rug, this EIVOR CIRKEL one, or the LATTJO rug actually used to recreate the Simpsons’ living room floor covering. Need some Christmas lights to communicate with someone trapped in the Upside Down? Try any of the SOLVINDEN options available on IKEA's website.

And when it comes to Monica Gellar’s apartment? There are a whopping 37 items included on IKEA’s own list of what they used to recreate the iconic Friends living space, from a cream-colored couch to a wacky, spiky pendant light that’s an incredibly close match for Monica’s own. As Marques put it, the hard part wasn’t trying to find a good match for each item; it was “to select from all these options we had.” It's true that sometimes less is more... but that's certainly not the case here. Sometimes, more is more.

Monica’s apartment is, of course — as virtually all New York apartments are in television shows — wildly unrealistic in all kinds of ways, ranging from its size to its cost and everything in between. Friends did go some ways to explain exactly how Monica could afford such a huge place in such an expensive neighborhood; the lease is actually held by Monica and Ross’ grandmother — and it’s rent-controlled, to boot. The size, however, is a little less easy to explain — at an estimated 1,125 to 1,500 square feet, it’s about 50 percent larger than the average two-bedroom Manhattan apartment, reported CNBC in 2018 — but it’s somewhat comforting to know that even if you were lucky enough to score an apartment as big as Monica’s, you’d be able to fill all that space affordably, thanks to the glory of IKEA.

For what it’s worth, Eduardo Marques did note to AdWeek that the IKEA Real Life Series “never [mentions] a single show’s name or [uses] any of their distinctive logos.” Said Marques, “That was done not only for legal reasons, but because we wanted people to connect the dots. We thought, ‘If we do our job right, the audience will see the possibilities we worked so hard for them to see.’ And they did. The conclusion came from people’s imagination.” And how!

The images of the pop culture living rooms and the lists of furniture filling them aren’t the only elements of the campaign, by the way; AdAge reports that there will also be “a live event in the Middle East recreating all the rooms so that customers can experience them in real time.” So, uh, if you happen to live in the United Arab Emirates, keep your ear to the ground — and if you actually do get the chance to walk around Monica’s, the Byers’, and/or the Simpsons’ homes, please take as many photos as humanly possible. Pics or it didn’t happen, as they say!

More like this
American Girl Doll Memes Are Going Viral On Instagram & Tiktok
By Emma Carey
Emma Thompson, Lashana Lynch, & Stephen Graham Lead Netflix’s 'Matilda'
By Sophie McEvoy
Taco Bell Announced A Crunchwrap & Tostada Made With Cheez-Its
By Emma Garza
The 'Hocus Pocus' Sequel Finally Has A Release Date & It Makes Total Sense
By Shannon Barbour and Radhika Menon
Get Even More From Bustle — Sign Up For The Newsletter